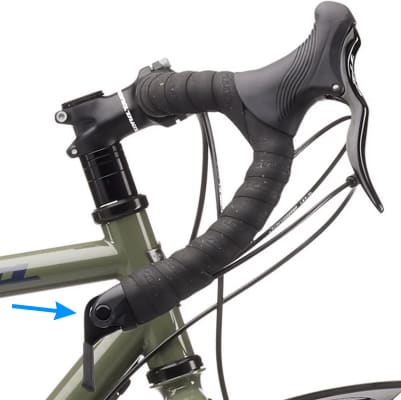 Rear shifters are of course used to shift gears at the back – that is to control the rear derailleur (RD in the future) which then moves the chain from one rear sprocket to the other. In this post first, there will be a short explanation of the difference between friction and indexed shifters, then the compatibility of indexed shifters will be explained by three standards of the three biggest equipment manufacturers: SRAM, Campagnolo and Shimano. For each standard, it will be sorted by the number of “speeds”, that is the number of rear sprockets.
Note 1:
This article is about shifters for controlling derailleurs. Rear gear hubs have completely different shifter standards, so the info given here is not relevant for those.

Note 2:
Before you start, to avoid any misunderstanding:
please take the 5 minutes needed to read the compatibility articles use instructions.

This goes for both front and rear shifters.

Friction shifters work analogously – that is the cable is pulled for the amount that the lever shifter is moved. Changing gears is done by feel (and hearing) – moving the lever until the gear is changed and chain rattling stops. 🙂

Advantage of such system is that it always works without fine tuning. It is the most robust shifter system. Disadvantage is that it is sometimes harder to get it just right manually – it takes some time and practice. They are compatible with all the RDs and numbers of speeds, but if there are more than 8 sprockets at the back, sprockets are more tightly packed, closer together, so it is hard to get the RD to align with the desired sprocket – smaller error margin. That is why they can’t be recommended for more than 8 sprockets.

Indexed shifters have a number of pre-designed positions. One click moves/releases cable by a certain, pre-calculated amount. Number of clicks needs to match the number of rear sprockets (minus one, of course) and the amount of cable pulled needs to move the RD to align with the next sprocket. Additional complication is that various models of RDs move for various distance for the same amount of cable pulled (for 1 mm of cable pull, some RDs move for 1,7 mm, while others move for only 1,3 mm etc.). This needs to be considered when talking about compatibility.

In the rest of this post, it will be explained which indexed shifters can be mixed with which RDs. If it’s not noted differently, it is understood that the number of shifter speeds matches the number of rear sprockets (10 speed shifter with a 10 speed cassette and so on).

Number of speeds RD is designed for is more a marketing term – as long as RD movement and desired cable pull is matched with the shifter cable pull, all will work fine.

This goes whenever combining shifters with more speeds than the number of rear sprockets. For example: 7 speed shifter with a 6 speed cassette and similar.

Shifter will have more clicks than there are available rear sprockets. To prevent shifting to drop the chain off the cassette, RD movement needs to be limited with limit screws (this should always be done anyway, regardless of the shifter used).

When the chain reaches the end of the cassette, shifter will have more clicks. Every indexed shifter has clicks for releasing and for pulling the cable. When setting up the shifter, it should be set up so that it can pull the cable all the way, leaving one or more click for releasing the cable unused.

For example, 7 speed shifter with a 6 speed cassette should be set so that when it pulls the maximal amount of cable, the RD aligns with one end of the cassette, and after five clicks of cable release RD should be aligned with the opposite side of the cassette. This leaves sixth click for releasing the cable unused – RD will not move at all, since it will be limited with limit screws.

Opposite setup would be so that when cable is released as far as it goes, RD aligns with one end of the cassette. Then, after five clicks for pulling the cable, RD will reach the opposite side of the cassette and the limit screw stop. This will leave one more click for pulling the cable available. Shifter lever will allow one more click for pulling the cable, while the RD will be stuck in place with the limit screw. If shifter lever is pulled for the remaining click, probably nothing will happen but the user will feel the lever not moving, resisting. However, since shifter mechanism is fine and sensitive and the RD can not move any more, pulling the lever could cause the shifter mechanism to break and shifter will no longer work.

Reminder: if RD movement is not correctly limited with limit screws, it could “change” a gear so that chain drops off the sprockets completely, which can be a problem.

Each of these shifters works fine with any SRAM RD as long as they are by the same standard.

SRAM 1:1 is, judging by data, compatible with Shimano 11 speed MTB RDs, but I haven’t tested this in practice.

Campagnolo has two standards per shift, called old and new. 🙂  Old ones are matched with old RDs, new ones with new. Since the amount of needed cable pull differs for each number of rear sprockets, there is no cross compatibility whatsoever. 10 speed new shifters work only with new 10 speed RDs. 8 speed ones with 8 speed RDs. And so on. Old standard comes in 8 to 10 speed variants, while the new one comes in 9 to 11 speeds.

Apart from that, as of 2014 (don’t take my word for the exact year), campagnolo introduces another 11 speed standard. Previous Revolution 11 and the newest Revolution 11+. They are not compatible.

Newest Campagnolo 12 speed standard (introduced in 2018) is not compatible with any others (as far as I know).

One exception is that old Campagnolo standard, judging by data, should work with Shimano 11 speed road RDs, but I haven’t tested this.

If it is any consolation, Campagnolo shifters are more robust, longer lasting and can be serviced, unlike other manufacturers’ shifters.

It is also interesting that not every Campagnolo shifter pulls the same amount of cable with each click. With 10 speed for example, there is more cable pull for “slower” speeds, than there is for the others.  2.5 mm pull five times (from smallest 1st to the 6th sprocket), 3 mm for 7th and 8th, then 3.5 mm for 9th and 10th. 2.83 mm average cable pull per click.  🙂

Compatibility will be given per number of speeds, except for 10 and 11 speed shifters, where cable pull differs from road to MTB models.

They are also compatible with SRAM 2:1 RDs (that were in fact made so that they match the Shimano standard).

6 speed shifters will work well with 7 speed sprockets, but they will not shift onto one of the outer sprockets because they don’t have enough “clicks” (5 in stead of 6 needed for a 7 speed cassette). They can be set up so that they don’t shift onto the smallest, or the largest sprocket at the back, with everything else working fine.

7 speed shifters will work with 6 speed sprockets, but one “click” will be unused – will do nothing (read the important note at the beginning of the post if doing this).

8 speed shifters can work with 6 and 7 speed sprockets (read the important note at the beginning of the post if doing this). Since the required Shimano 8 speed cable pull differs slightly from the 6 and 7 speed one, shifting will not be as quick, accurate and there might be some chain noise in certain gears, but most will work fine.

9 speed shifters pull significantly less cable per click than 6, 7 and 8 speed ones. They can be combined with 6 to 8 speed sprockets (read the important note at the beginning of the post if doing this) if the cable is attached to the opposite side at the RD (see position B in the picture below). Then it will all work , but some gears might not work perfectly.

A “hack” if a shifter pulls more cable than it should, when mix-matching, is shown in the picture below, but I haven’t tested that:

Another exception is the new “gravel” group (with hydraulic brakes): Shimano GRX. Caple pull wise it’s the same as Tiagra 4700.

With alternate cable attachment (position B in the picture above), they can be made to work with 9-speed cassettes. Shifting speed and precision will degrade, but it can work (read the important note at the beginning of the post if doing this).

They can only work with Shimano 10 speed MTB RDs.

I haven’t tested, but they should work with SRAM RDs of SRAM 1:1 standard. They should work, as long as the cassette used is Shimano 11 speed MTB one.

From summer of 2018 Shimano introduces a new XTR M9100 groupset. New shifters have a switch for 11 and 12 speed operation setup, but only work with new Hyperglide+ cassettes.

For 10 and 11 new Campagnolo, this differs from click to click, the data is given on average.
Also, the given numbers are a result of measuring complete length of cable released (after all the clicks), divided with the total number of clicks – cross referenced with cassette sprocket pitch, and rear derailleur movement ratio (per 1 mm of cable pulled). Not every given value matches 100%, but it’s the best I could source/measure/combine, and it gives a (rough) guide to what can work with what.

* Most probably incorrect number, needs checking. Can’t be the same as 10 speed Exact Actuation, since cassette pitch is different (narrower).