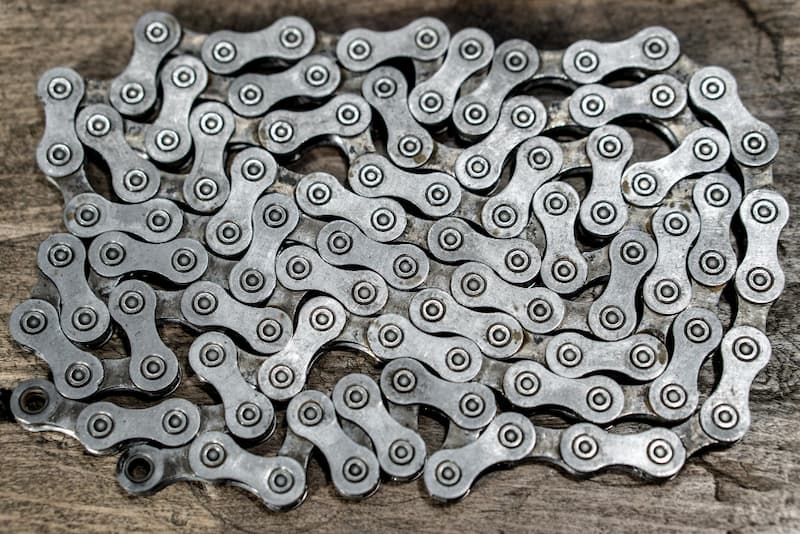 This post explains bicycle chain compatibility – which chains can be combined with which number of “speeds.” Firstly, basic facts about the chain will be explained. Then compatibility and possible mixing will be given per the number of speeds a chain is designed for. From one to 12 speeds.
Before you start, to avoid any misunderstanding:
please take the 5 minutes needed to read the compatibility articles use instructions.

All the bicycle chains share the same pitch of half an inch.

Where chains differ is the width. The more speeds, the narrower chain. Single-speed chains are the widest, both on the outside, and the inner roller width. They have a roller width of 1/8″ (3.175 mm).

The inner roller width of all the multi-speed chains is almost the same, being:

Where they differ significantly is the outer width.

How to connect and disconnect chains, with or without using quick links, video demonstration:

A 7.1 mm wide 8-speed chain* will fit all the other systems (5, 6 and 7-speed ones).  Shimano, SRAM and Campagnolo all use the same chain with 8 speeds. The chain for 7 speeds is a bit wider – 7.3 mm, while a 6-speed one is substantially wider – 7.8 mm. That is why the reverse is not the case and a 7-speed chain and especially a 6-speed one will not work very well on an 8-speed system.

Of others, 9-speed chains can work. They’re a bit narrower than optimal, but can be used. The reverse is not wise, since a wider 5 – 8 speed chain can get stuck between narrower 9-speed sprockets.

An exception is SRAM 1x systems, for DH MTB bicycles – they have 7 rear sprockets, but use an 11-speed chain!

The chain width is about 6.7 mm. In a pinch, a 10-speed chain can be used. Still, the narrower chain is more expensive, doesn’t last as long and might cause a bit slower shifting… but it will work. Problems generally occur at the rear – on cassettes. Front chainrings are less sensitive to the thickness of the chain used.

Otherwise, all the 9-speed chains will work well, regardless of the manufacturer: Campagnolo, SRAM and Shimano.

The chain width is 5.88 mm. Same as for 9 speeds: all the manufacturers can be mixed and a chain for one speed more can be used in a pinch – an 11 -speed chain in this case.

The chain width is 5.62 mm. 11-speed chains of all the manufacturers are mutually compatible.

Since 10 and 11-speed chains (as well as cassette teeth) have almost the same widths, a 10-speed chain can be used instead of an 11 speed-one, without it jamming between the sprockets. However, this will still not work perfectly and will cause premature sprocket wear, so better to avoid it.

The exception are Shimano Hyperglide+ chains, which work only with Hyperglide+ cassettes, whether they are 11, or 12-speed (the same chain is used) – according to Shimano, haven’t put that to the test.

Not sure how it works with other systems, waiting for user input and a chance to test it.

Shimano is, as far as I know, the only manufacturer that makes asymmetrical chains (as well as regular, symmetrical ones). The advantage of an asymmetrical chain is easier and quicker shifting from the small to the large front chainring and vice versa.

The picture above shows how the asymmetrical chain doesn’t have the same outer plates for the “outer” and “inner” (towards the bicycle) side.

How can I help BikeGremlin to remain independent and objective?

Table of chain outer widths:
(this table is for the readers’ convenience – an up-to-date table is in the article about bicycle chain standards)

Related post – How to shorten a new chain to size when mounting: