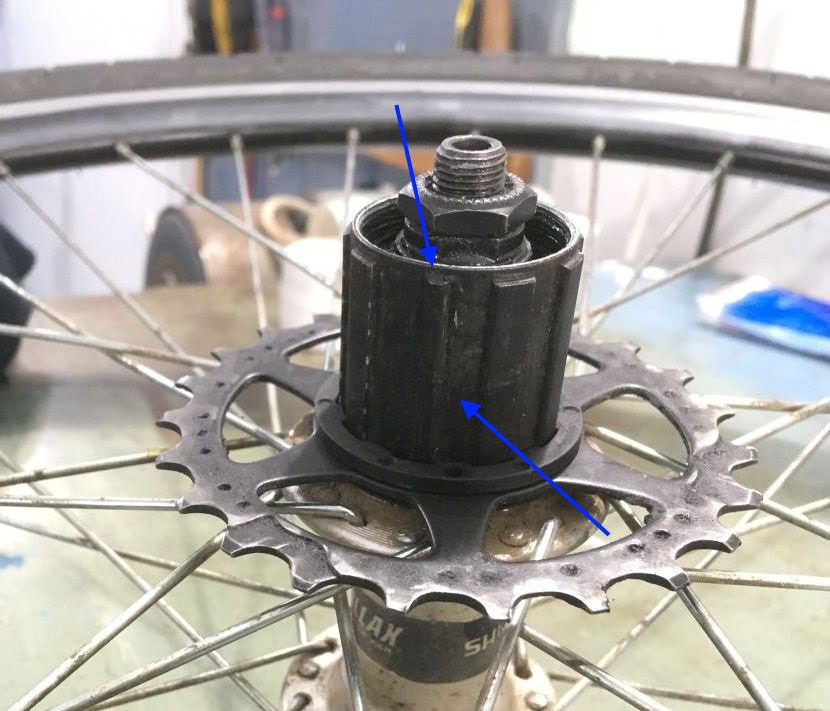 Compatibility categories will be sorted by number of rear sprockets. It is important to note that there are three major rear freehub standards – a) Shimano standard supported by most other manufacturers (SRAM as the biggest one), b) Campagnolo standard and c) SRAM XD standard that accepts cassettes with the smallest sprocket of only 10 teeth.

Stated compatibilities also go for SRAM (and most other manufacturers’) cassettes with the same numbers of sprockets – they’re compatible with Shimano, except the SRAM XD cassettes.

All the current (since the year 1990) freewheel hubs are compatible with all the 6 and 7 speed freewheel sprockets.

Cassettes with more sprockets can also be fitted onto 7 speed freehubs, but some sprockets need to be removed. The smallest sprocket must never be removed since it is profiled to accept the lockring holding the cassette in place. When removing sprockets, if it is not the largest one, expect shifting between the two adjacent sprockets left to be a bit sluggish, since sprocket teeth are profiled to allow faster shifting, but removing one sprocket messes up that pattern.

8, 9 and 10 speed cassettes can be used if one sprocket is removed.

11 speed MTB cassette should also fit with just one sprocket removed, but here, along with the smallest, the biggest sprocket also mustn’t be removed – it is specially designed to take up less space on the freehub body.

11 speed road cassette – two sprockets need to be removed. Unlike with 11 speed MTB, here the biggest sprocket can be removed.

It accepts all the cassettes, except 11  speed road ones.

This is important whenever mounting the cassette: smallest sprocket should engage the freehub splines, so it doesn’t turn freely, but it mustn’t be aligned with the freehub body all the way – it should be a bit “taller”. Otherwise lockring won’t be able to lock the cassette in place. If the last sprocket sits too deep, add a (thicker) spacer. If it turns freely, remove a spacer (or one sprocket, if there are no spacers used).

Pictures above don’t show a case when there are too many spacers (or they are too thick) – then the last sprocket would not be able to sit on the freehub splines properly.

To make things more complicated, Shimano “builds in” the spacer on some 10-speed cassettes. For example: Tiagra 10-speed (road) and many MTB 10-speed cassettes have a bit wider spider that carries the largest cassette chainrings, so there is no need for adding the 1 mm spacer.

11 speed MTB cassette is put straight on, just like 8 and 9 speed ones.

11 speed road cassette doesn’t fit this freehub. One sprocket needs to be removed (not the smallest one because of the lockring). Then a 1 mm spacer needs to be put before the cassette (do check alignment and put a thicker spacer, or remove the spacer if it all fits).

I demonstrated how to check whether spacers are just a bit too thick, or narrow in this video (watch until the end).

Another “catch” is that the newest 10 speed cassettes, Shimano Tiagra 4700 model, won’t fit these freehubs, because they are not cut deep enough for the taller splines. Just to make things more interesting. 🙂 The same goes for many 10-speed MTB cassettes.

In practice, when a term “10 speed freehub” is used, it is usually meant the 8 and 9 speed compatible one, not the exotic 10 speed only Shimano stuff!

8 and 9 speed cassettes can be used with a 1.8 mm wide spacer. Same goes for 11 speed MTB cassettes (thanks to Christophe for the feedback).

From summer of 2018, new standard, completely different from all the others. Freehub splines and cassettes are mounted differently and can’t be combined with other standards.

New cassette teeth design is called Hyperglide+, while the new mounting interface is called “Micro Spline“. It has 23 deeper splines, where Hyperglide has 13. Detailed explanation is at the following links: Hyperglide+ freehub and Hyperglide+ cassette.

Campagnolo hubs are compatible with Campagnolo cassettes only. Even there, they have different standards, by generations and by numbers of speeds, like it is explained here:

Current Campagnolo standard – suitable for all the modern Ultra-Drive cassettes, whether they are 9, 10, or 11 speed (12 speed as well from 2018).

Cassette carrier (freehub) has been redesigned and accepts cassettes with the smallest sprocket of only 10 teeth!

Many wheel and hub manufacturers make XD compatible freehub bodies that can be screwed onto the hub instead of the old Shimano compatible freehub. Unfortunately, as far as I know, Shimano is not among them for now.

As of mid-2018, SRAM has introduced NX Eagle groupset, which includes 12-speed cassettes compatible with Shimano (and SRAM) standard freehubs (for 8, 9, or 10-speed cassettes). However, they don’t allow for the smallest sprocket to be smaller than 11 teeth.

SRAM has also made an XD road freehub, named XDR (XD Road), that is wider by 1.85 mm than the XD freehub. 11 and 12-speed XD cassettes can fit XDR hubs with a 1.85 mm spacer added (like when mounting a 10-speed Shimano cassette on an 11-speed Shimano road hub). On the other hand, XDR cassettes won’t fit XD hubs, because they are wider by 1.85 mm, so will stick out on the outer end too much.