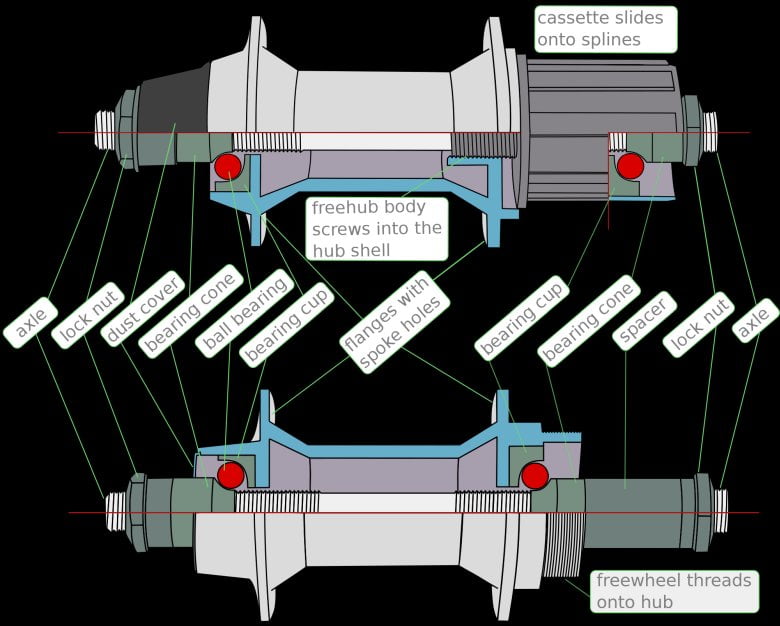 Rear bicycle hub has one main role, that is allowing the wheel to turn freely, while keeping it attached to the frame at the same time. Also, unlike the front hub, the rear hub has another important role: transferring driving force of pedalling to the rear wheel (usually, but not necessarily through chain and rear sprocket).

They consist of an axle, bearings and a body that has wheel spokes attached to it. There is also at least one sprocket for transferring pedalling power to the rear wheel. Three basic hub types are one geared (single speed, or even fixed gear) hubs, internal gear hubs and external derailleur hubs (with cassettes).

The basic hub design. Power is directly transferred to the wheel (hub body) from the attached sprocket. It often has coaster brake installed. Since there is (by default) no external chain tensioner, it is often mounted in a frame with horizontal dropouts, which allows for chain tension regulation by moving the hub front and back.

Single speed hubs can be used on frames with vertical dropouts, if they have off center mounting bolts (like the hub in the picture above), or if an external chain tensioner is mounted.

Another solution I came across, quite exotic, is an eccentric bottom bracket shell:

Special subgroup are fixed gear hubs. These hubs don’t allow coasting – whenever the rear wheel is turned, rear sprocket runs also. It is fixed to the hub body. Advantage is the opportunity of riding backwards. The flaw is that pedals keep turning, even when that is not convenient (avoiding obstacles, or a fast downhill ride).

These hubs are practical for shorter distances in flat land areas. Their main advantages are simplicity, durability and low cost.

They also have one sprocket and all the limitations of mounting singlespeed hubs also apply to these hubs. They have a long history, from the beginning of the 20th century and famous English three speeds. Today most popular models have 7-8 speeds. The gear changing implementation is a topic for another blog, but the important thing to know is they allow gear changes when completely stationary, no wheels spinning (e.g. while stopped at a traffic light).

Gear changing mechanism is well protected from the elements, packed inside the hub body. This makes internal gear hubs good choice for very wet, or very cold conditions. This is a system that allows changing gears in temperatures lower than -15 degrees Celsius.

Main drawback of these hubs is harder servicing and harder, more complicated wheel dismounting (when fixing a flat etc).

4. Hubs with a freewhell, and freehubs with a cassette

Detailed explanation of differences between freewheel and a freehub is given in this post:
Freewheel vs freehub

Threaded hub has threads for screwing the freewheel on. The freewheel holds a cluster of sprockets and a ratcheting mechanism that allows free backpedaling (and coasting), while locking when pedals are turned forward, driving the rear wheel.

Freehub has installed cassette holder with splines, and a ratchet mechanism. This patent allows for a more precise machining, allowing the cassette to be totally perpendicular to the hub axle, i.e. being parallel with the rear wheel. Thread-on frewheel can never be this precisely parallel, because it is very hard to machine threads on both the hub and the cassette to reach perfect alignment when screwed together.

Another advantage of freehubs is the bearing position. Intersection is shown in the picture below:

The spot where hub takes the most torque is where the sprockets are mounted and pulled by the chain. Freewheel hub has bearings placed almost in the middle of the hub, giving long leverage for sprockets to tug the axle. That is why hubs with freewheels were known to experience broken axles, especially with larger number of sprockets (therefore longer part away from the right bearing, giving stronger leverage to break the axle). This standard should be limited to 6 sprocket freewheels, maximum 7. Anything over that number (wider cluster of sprockets) is very likely to cause breaking the rear axle.

There is another variation in standards. Typical road bike rear hub is 130 mm wide, while MTB freehub is a little wider: 135 mm, allowing more lateral strength. Newer standard of MTB rear hubs for extreme riding condition is made even wider (with matching frames with wide dropouts), so the wheels are even stronger. There are now: 142, 148, 150 and even 158 mm wide rear hubs!

Old standards are 120, 126 mm etc. Width measured is the outer one of hub parts that face the inside of the dropouts. Term still used for this dimension is “OLD” (Over Locknut Distance), although many modern hubs with “industrial” bearings don’t have locknuts. On cup and cone hubs (that used to be the only available in the past), the outer most nuts were used to lock the cones in position by counter-tightening them, so they were called “locknuts”.

For more detailed info on mix-matching freehubs, cassettes and other components, see the posts in bicycle components compatibility section.