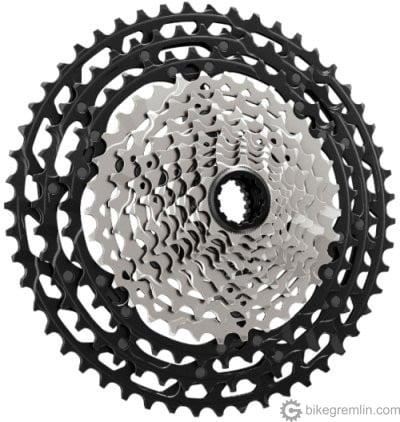 This post will explain bicycle cassette compatibility i.e. what cassettes can be mixed with which rear shifters/derailleurs. For compatibility with various chains, see: Chain compatibility post. Overview of compatibility and possible combinations will be given according to the number of sprockets. From the old 6 sprocket standard to the newest 12 sprocket one. There are two things to consider when combining cassettes: number of sprockets, and sprocket spacing. Both those things affect the cassette width and indexing of non-friction shifters, i.e. index shifters. Table with sprocket thickness and spacing is at the end of this post.

Indexed shifters work with clicks – each click changes one “speed”. In order to function properly, they require that derailleur movement ratio and sprocket widths are matched with shifter’s cable pull ratio. This is explained in detail in a separate article on shifters: Rear shifter compatibility.

One more thing before explaining compatibility: there are two main standards of cassette mounting. Freewheel and freehub. That is explained in the article: Freewheel vs cassette. 6 speed is always with a freewheel. 8 and more speeds is always a freehub cassette (there used to be 8 speed freewheels, but those where never widespread and are now obsolete). 7 speeds usually come as freewheel cassettes, but can also be found in a freehub cassette standard.

Most manufacturers’ cassettes (and freehub body splines) are compatible with Shimano (SRAM, Sun Race etc.), while Campagnolo cassettes use different freehub splines – that is explained on. Also, SRAM XD cassettes (and freehub body splines) differ from all the rest. All this is explained in Rear hub compatibility post. These mounting standards are important for physical mounting of the cassette on the wheel, they have nothing to do with chain and shifter/derailleur compatibility.

All the 6 speed sprockets are with a freewheel. As a rule of thumb, all the models of all the producers can be interchanged without problems. Shimano’s standard is widely accepted.

Sprockets are placed at 5 mm spacing, with each sprocket being 1.85 mm thick.

Sprocket width and spacing is the same as for 6 speeds. Here Shimano standard is also accepted and all the producers’ 7 speed freewheels are compatible with it.

Sprockets are placed at 5 mm spacing, with each sprocket being 1.85 mm thick.

Uniglide uses threaded smallest sprocket to hold the cassette in place, while the Hyperglide uses a special lockring.

All the modern cassettes are of Hyperglide standard, regardless of the teeth number. In case of having a uniglide freehub, mounting a modern (available) hyperglide cassette can be done in two solutions. One is to remove smallest sprocket off the (new) hyperglide cassette and use the (worn) smallest uniglide sprocket as a lockring, filing/grinding off the widest spline of the rest of the (new) hyperglide sprockets. More complicated (probably better) solution is to switch the freehub body for a hyperglide one. Video explaining it is here: converting an uniglide freehub to a hyperglide.

This goes for 8 speed as well: 7 speed cassettes have the same sprocket width as 6 and 8 speeds, but 8 speed is a bit tighter spaced – at 4.8 mm. This means that 8 speed sprockets can be used for 7 speed cassettes, as long as the 7 speed spacers between sprockets are used.

Many cassettes have sprockets held together with 3 small rivets, but these are only for convenience when mounting and can be removed so that sprockets can be swapped.

The same sprocket width as with 6 and 7 speeds, but a bit tighter spaced – at 4.8 mm. This means that 7 speed sprockets can be used for 8 speed cassettes, as long as the 8 speed spacers between sprockets are used.

Sprockets are placed at 4.8 mm spacing, with each sprocket being 1.85 mm thick.

Campagnolo 8 speed cassettes have just slightly different sprocket thickness and spacing, compared to Shimano, so they can be mixed with Shimano 8 speed shifters and derailleurs, with index shifting working good. Provided that appropriate freehub body is used: Campagnolo and Shimano cassettes can’t fit each other’s freehubs – Campy with Campy, Shimano with Shimano.

Here there is no combining with any other standard. 9 speed cassettes have a unique sprocket thickness and spacing. Campagnolo has their own 9 speed standard, incompatible with Shimano’s.

Sprockets are placed at 4.35 mm spacing, with each sprocket being 1.78 mm thick.

Same sprocket width as 11 speeds, so (more expensive) 11 speed sprockets can be used as replacement, provided 10 speed spacers are used,.

Sprockets are placed at 3.95 mm spacing, with each sprocket being 1.6 mm thick.

Sprocket width is the same as for 10 speeds, so 10 speed sprockets can be used, provided that 11 speed spacers are used.

Sprockets are 1.6 mm thick, spaced at 3.74 mm (road), or 3.9 mm (MTB).
For more clarity on this, see below the comment by Nicolas Hanssens and the following four replies by myself and Nicolas Hanssens. I.e, based on my last measurement, and practical experience, Shimano MTB and road 11-speed cassettes have very slight differences that don’t make a noticeable difference when it comes to shifting (video explaining an 11-speed MTB cassette on a road bike pairing).

Campagnolo of course doesn’t accept any 10 speed sprockets. However, just like with 8 speeds, combining complete cassettes is possible: Campagnolo 11 speed cassettes have just slightly different sprocket thickness and spacing, compared to Shimano, so they can be mixed with Shimano 11 speed shifters and derailleurs (and vice versa), with index shifting working good. Provided that appropriate freehub body is used: Campagnolo and Shimano cassettes can’t fit each other’s freehubs – Campy with Campy, Shimano with Shimano.

With 11 speeds there is another exception: it is the only case where Shimano standards for road and MTB differ. For all the other standards, MTB and road cassette is just a marketing term, explaining the number of teeth bigger sprockets have and the difference in sprocket teeth numbers between adjacent sprockets, but with 11 speeds, cassettes really differ. 11 speed road has a longer freehub body, while MTB 11 speed cassette fits 8-9-10 speed freehub. However, sprockets, except the largest one, can be mixed and matched.

Also, SRAM makes XD 11 speed MTB cassettes that fit only SRAM XD freehubs, they can’t be mounted onto other freehub types. These cassettes can accommodate a small sprocket with only 10 teeth.

These come in four different standards.

Compatible only with Shimano Dura Ace shifters and RDs from the same period (6, 7 and 8 speeds), because of a different cog pitch.

Indented grooves are used to pick the chain up when shifting to a larger sprocket. Exa-Drive indentations are designed to catch the chain pin first, then the outer plate. They work well with 8 and 9 speed Campagnolo chains.

Modern 10 and 11 speed Campagnolo chains don’t have pins protruding out of outer plates, so the newer Ultra-Drive is designed to catch the outer plates directly.

Sprockets of these two standards (with equal number of speeds) can be combined, although it will affect gear changing speed.  🙂

* See the explanation in chapter 11.