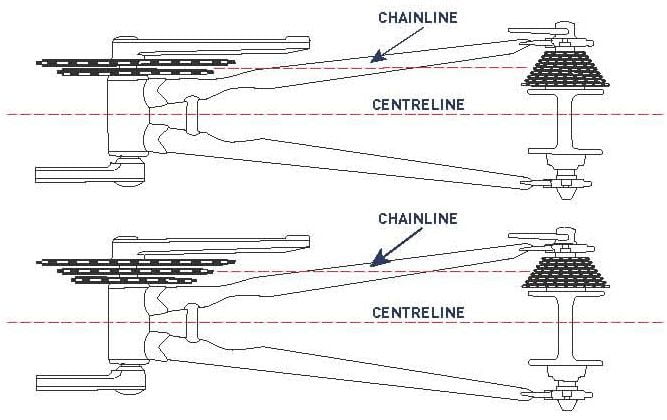 There’s been a long trend of ever increasing number of speeds on bicycles. From single speeds, “tenspeeds”, over 18 speeds (bicycles with 3×6 chainring setups), to modern “1X” trends with only one front chainring and 10 to 12 rear chainrings (“sprockets”). This post will try to answer the question: how many speeds are really needed for cycling?

1. How many speeds is the best for a bicycle?

In order to answer, it is necessary to understand how derailleurs and gearing work, as well as the construction of the rear hub. Which are explained in the following chapters.

Short explanation:
It is important to have gearing slow enough for steep climbs and fast enough for wind at one’s back, without large gaps in between (equivalent of a large gap would be shifting from 2nd to the 4th gear in a car).

There are two groups of derailleurs

There are three derailleur systems

This explanation will be limited to external, cable activated derailleurs. Internal gear (rear) hubs, as well as electronic derailleurs are a special case and will need a special topic. To just put a short explanation: internal gear hubs are good for riding in very cold conditions (colder  than -15 degrees Celsius) and electronic derailleurs are similar to cable activated ones but a bit more expensive, use batteries and automatically trim the front derailleur cage – good for racing.

For front derailleur, number of (front) chainrings is important (is it 2 or 3).

For rear derailleur, also, the number of rear sprockets is important.

For both the front and rear derailleur, these two things are also important:

This article explains how the rear derailleur works and how the number of rear sprockets influences sensitivity of the RD: Rear derailleur.

One, two, or three front chainrngs?

The main advantage of 2 chainring system is easier shifting, with less worry about cross chaining. This is important for competitive cycling, while for recreational cycling it simplifies shifting a bit, but one gets used to 3 chainring shifting quite quickly.

The advantage of one chainring system is lower weight and even simpler shifting. There is one shifter handle less and one derailleur less. However, either gear range, or gear spacing must suffer with this system. Usually both.
Here you can read more about the pros and cons of 1x drivetrains.

Systems with 8 and less sprockets, there is a wide gap between sprockets. This enables RD to be less than perfectly tuned and aligned and still work well. Also the chain is thicker and stronger.

Also, shifter levers and cables often have some friction and some housing provides a wee bit of play. This affects systems with lower margin for error: the smaller spaces between rear sprockets, the narrower the chain –  the less margin for error.

Going to more than 8 sprockets, to 9, 10, or more changes everything:
prices of parts are higher (chain, cassette), error tolerance is lower, because sprockets are more tightly packed, with smaller gaps. The advantage of narrow sprocket spacing is a bit quicker shifting at the back.

On the other hand, 6 and 7 speed systems are hard to find with a cassette rear freehub, just with a freewheel. Why having a freehub is an important advantage is explained in this post: Freewheel vs cassette. If minimal cost is priority, 6 speeds is probably the best choice though.

Still, if budget allows, quality rear hubs are made as cassette freehubs, which fit 8, 9 or 10 sprockets. Cassette freehubs for 6 or 7 speeds are getting harder to find.

For detailed explanation of the topic, look at this post: Speeds – rear sprockets.

Considering prices of parts (sprockets and chains), robustness, ease of adjustment and maintenance, gear ratio range and gaps, as well as market availability, gearing with 3×8 setup is an optimal choice.

3×6 is good choice if minimal cost is the priority.

Advantage of systems with more rear sprockets are a few more transmission ratios in between – slightly smaller gaps between gears and slightly quicker shifting when everything is set up properly (new clean cables and housing). Speaking of gears, the “fast” part of the cassette is similar – differences come with slower gears, where large gaps can even be useful – climbing a hill, with one change gearing becomes much “easier”.

Greater gaps are at the last two thirds of the cassette, where they shouldn’t matter too much, except for competition, racing. Same goes for road cassettes:

Does it pay to have less reliable, more expensive system, in order to get an in between gear or two that are used when climbing? Each must answer for themselves, according to their criteria. For short distances on flat ground, one speed is often an optimal solution. For top racers, 2×11 setup is worth every cent and every gram.

8. Personal opinion of the author

I believe that more than 8 sprockets at the back, as well as wheels with less than 36 spokes are the biggest frauds in the cycling industry. At the expense of consumer, they are marketed as “improvements”,  “upgrades”, but hardly bring anything measurably better.

This post explains the spoke count problem: Wheels and spokes.