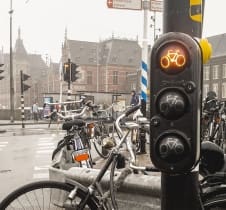 Explanation of cycling related traffic laws in Serbia. Answers to frequently asked questions and help to those not familiar with these laws, who wish to cycle in Serbia.

Legal language can be confusing, so in this post I’ll explain in “plain English” the lawful rights and obligations of cyclist in Serbian traffic. Hopefully helping people who live, or just cycle through/in Serbia, stay safe and trouble free. Serbia is along the famous Danube cycling route, that starts from Germany and goes all the way to the Black Sea.

Current version of the law can be read (in Serbian) on the laws and regulations page, of Serbian police. Here’s a copy of the Serbian traffic law, on bikegremlin.com – just in case (last version of March 2019).

I already wrote a series of articles on how to safely ride a bicycle in traffic, and how to safely lock a bicycle, for which I think are useful and apply to practically every country, while here I will deal with cycling related traffic rules and regulations.

In order to understand this text, without making it too long, I’ll define a few terms (as the law defines them):

3. Helmet, lights, and safety equipment on a bicycle

Wearing a helmet on a bicycle is not required (but also not forbidden, of course).

At night, if standing on the road, or pushing a bicycle on the side of the road, you should wear a high-visibility vest [81].

At nigh, you must have white light in the front, and red light at the rear. Blinking lights are technically not in accordance with the law, so you need at least one light that is always on at the front and at the rear. And technically, the lights must be mounted on the bicycle (a helmet mounted light “doesn’t count”) [81-1-5].
I already wrote about bicycle lights. In my opinion, blinking light should be allowed for the rear – much more time for the drivers to spot it, and blinking does draw attention.

It is generally regarded that “bicycles must have brakes on both the front and the rear wheel”. I couldn’t find where it’s written in any law. Though it is sensible to have good working brakes on both wheel, in case one brake (or wheel) malfunctions.

People drive on the right side of the road in Serbia (which is bad, since most people mount/dismount bicycles and motorcycles from the left hand side, thus stepping into the traffic, instead of to the side of the road – more info on that on worldstandards.eu).

Cyclist must ride within 1 metre from the right hand side of the edge of the road, except when turning left on an intersection, or when overtaking [40-1].
This is not always safe, as I explained in the post about safe cycling traffic lane positioning. So I often consciously disregard this law – at my own “risk”.

Overtaking a cyclist is generally always allowed, even when there is a no-overtaking sign [55-7].
There is no defined minimal overtaking distance – it is defined simply as “to not endanger the others” [55-2]. Why I think this is OK, is explained in the post: Safe bicycle overtaking distance.

In group rides, cyclists must go one behind the other(s), not abreast [89-4].

Cyclists are obliged to use a cycling lane, or a bicycle path, if they exist, i.e. in that case they mustn’t ride on the road [40-1]. Which I don’t really like, so I often choose roads without bicycle paths/lanes. But more on that later.

Cyclists mustn’t use motorways (highways, any roads where “vehicles slower” than 50 km/h are not allowed) [102-1].

Kids under the age of 12 can’t ride on the roads, nor on cycling lanes (only on separate bicycle paths and similar) [88-1].
I think this is bad and, with primary school traffic law education, perhaps even with adult surveillance, kids should start cycling in traffic earlier.

In slow traffic zones and pedestrian zones, kids younger than 9 can ride bicycles, only under surveillance of a person older than 16 years [88-3].

Drugs are generally illegal in Serbia, which goes for cycling as well.

It is also not allowed to carry another person on a bicycle, if they are drunk, or drugged [91-2].

8. Other bicycle related rules and regulations

When turning, one must signal the turn with a stretched out hand pointing the direction of the turn. Hand must be held during the entire manoeuvre [32-4], which is nonsense in my opinion (legislators obviously didn’t try riding up hill with only one hand on the handlebars).

No removing legs off the pedals, for as long as the bicycle is moving [90-1-2], which is also nonsense, as I had demonstrated in a video (in Serbian). No one has been fined for this for all I know.

No leading animals (like running a dog) while cycling, nor pulling other vehicles (trailers are allowed) [90-1-4].

9. Intersections and rights of way

If the traffic is not regulated by a sign, traffic lights, or a policeman, the vehicles coming from the right hand side have the right of way.

If a cyclist wishes to use a pedestrian “zebra crossing”, they must dismount and push the bicycle across the road, while walking.

If a bicycle path crosses the road, when there are traffic lights (as shown in picture 1, top left corner), then cyclists have the right of way when the light is green (as in the picture). What when there’s no traffic light?

In Serbia, most drivers don’t look and don’t give the right of way in the situation B in picture 2, so take that into account.

10. What to do in case of a traffic accident?

Remain calm and composed. If there are any injured, call the ambulance (dialing 194), and give first aid if that is needed and you know how to do it.

Write down the licence plates (sometimes people run away from the scene).

Call the police (dialing 192), or have someone else call if you are not able, for any reason.

Exchange the information with the others involved in the accident, checking each other’s documents. If they don’t want to give you any documents, just write down the plates and wait for the police.

Photograph everything at the scene. Photographing people without their consent is against the law (though I personally think it can be done discretely and be of more help than harm, but you do that at your own risk).

Wait for the police and don’t touch anything at the accident scene. Drivers, especially if they figure they’re “guilty”, will try to put the bicycle upright and move it from the road, “to clear the traffic”.

If you are hurt, ask someone to guard the accident scene until the police arrive (it can often take hours).

Material evidence often bears a lot more “weight” in court, than witness statements (people can get many friend to lie in their favour).

It is my personal impression and opinion that institutions in Serbia don’t work well at all, and there is a very high level of corruption. So it is often good to hire a good and experienced lawyer.

or by shopping at