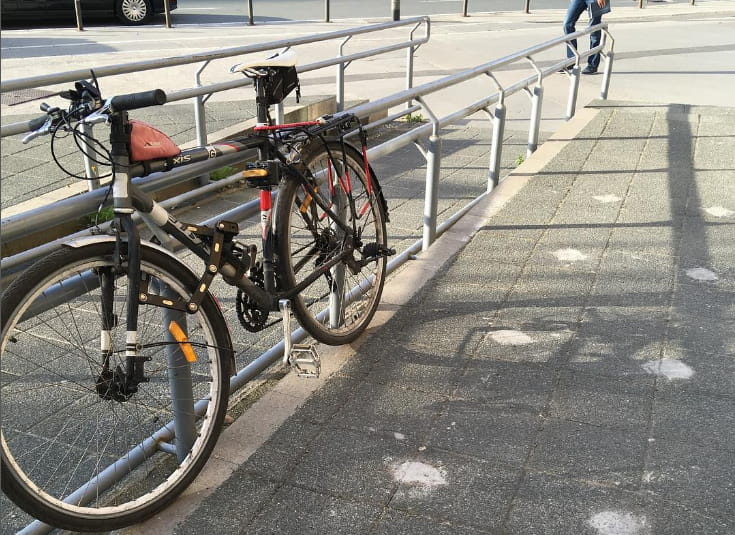 This post explains how to securely lock a bicycle – so it is safe when left outside, unattended. What to look out for, how to do it properly. A separate post gives some practical ideas for storing a bicycle indoors (inside a flat is definitely safer than in the street).

Often people get put off using bicycles as a means of transport by bicycle thefts. Bicycle safety is like an anecdote of two men walking the desert, one carrying a pair of running shoes in “case a lion shows up”.  His friend asks him if he thinks he’ll outrun a lion. He replies: “I just need to outrun you”.  🙂

The point of locking a bicycle is not to make it impossible to be stolen  – such locks don’t exist. It is important just to make it not worth the bother to thieves – because there is a lot of easier prey in the street. How to achieve that?

If the bicycle can’t be carried along all the time, it is best left in a crowded, lit, public place. Backyard or a building corridor are places where thieves can work easily, hearing and seeing if anyone is approaching. A corridor in front of a flat is one of the worst places to lock a bike.

Apart from those, perhaps the most dangerous place is “just for a minute“. Bike left just for a minute, unlocked, even if in the site of the owner is easy to sit on and ride off. It happens. Entering a shop for a second, or carrying a load and leaning the bike against a wall, just to put the load in the gateway (or in a car), are also situations that thieves often use.

If the bike is expensive or looks expensive, with disc brakes, shock absorbers, leather saddle, or other sought-after parts, the risk of theft is higher. Clean, neat-looking bicycles that catch the eye are more likely to get stolen.

A key point. If a bicycle is locked so that it can easily be carried away and then have locks open at one’s convenience, it is an easy target. Always make sure the bicycle frame is locked to an object that is not easier to cut than the lock itself.

Here are a few examples of poorly locked bicycles:

It is practical to have one strong, sturdy, heavy lock to lock the frame (and a wheel too) to a post, then use a cable to lock the other wheel.

The saddle can always remain chained to the frame, wherever the bike is ridden.

Here are some examples of well-locked bicycles:

Good locking technique makes the job difficult for thieves. To steal anything valuable from the bike, they have to cut at least one lock/cable.

If a U-lock is used, ensure there is no free room left – if it’s a long one, lock both frame and a wheel. So that a car lifting jack can not be put inside.

In the case of a very small U-lock, one could lock just the rear wheel to a post, but through the bicycle’s rear triangle. This makes it impossible to remove the rear wheel without cutting the lock, the frame, or the rear wheel rim. Cutting a wheel rim is a tedious job (remove tyre, tube, cut the whole rim in a tight place…).

I read about this method from the late legend Sheldon Brown (his website link).

There are several basic lock types:

All the lock types are good. If one carries two locks, it is a good idea to combine a cable with one of the other 3 types. This is because it takes different kinds of tools for those locks: cables are usually cut, while the others are sawn, or broken (or cut if they are too thin, which is explained in the Bicycle locks article.).

Even a well-locked bicycle with a good lock takes just about 20 minutes to hack. If the thief uses a battery-powered angle grinder, it is just a few minutes. So no method is 100% safe. However, if the bike is better locked than the other bikes in the street and it doesn’t look more expensive, there is a much greater chance it will wait for you where you left it.

In contrast, cheap bad locks and poorly locked bicycles are taken within a minute or less, with ordinary tools every small thief has, or even without any tools.

1 thought on “How to securely lock a bicycle”