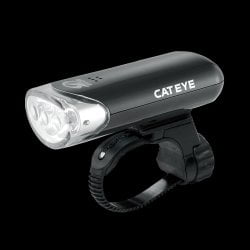 Is it necessary to use bicycle lights at night? How to be properly lit, safe and visible when cycling at night? What kind of lights are the best for a bicycle?

1. Why reflectors DON’T do the job

When driving a car at night for example, you will often see reflective surfaces of traffic signs, road markings, even orange reflectors on bicycle pedals moving up and down when shone upon by your headlights. This sometimes makes people believe reflectors are all it takes to be seen on a bicycle. One can then wonder – why use lights on a bicycle? Aren’t reflectors enough?

This is because reflective materials reflect light only in certain conditions, which can easily not be met. A reflector doesn’t have a battery that can go wrong, but it can “decide” to stop working for any reason listed below:

It needs to be repeated: in order to work, reflector needs to be under direct light, and it directs light right back. That means that if it is lit from the left side, it will reflect the light to the opposite side – to the right.

For this reason, many reflectors have a surface that is “folded”, so they can reflect light from several angles. Still, when lit from a side, reflectors don’t reflect a lot of light, and are not as visible as (bicycle) lights. Especially if the oncoming vehicle doesn’t turn the lights on (not working, forgot to turn them on, doesn’t have any…).

Because of this, in the picture below, if all the cyclists have just reflectors (not lights), only the cyclist directly in front of the car will be visible. Which can be fatal for the cyclist coming from the right, if they expect to be given the right of way in the crossroad:

Reflectors are a good addition, but in no circumstance a replacement, or a even a backup for bicycle lights.

2. Difference between “seeing” and “noticing” (consciously)

Before explaining what kind of bicycle lights are the best, a short explanation of the difference between “seeing” and “noticing”. Human brain filters information it receives. Otherwise people couldn’t function from all the information overload. This applies to observing as well. For example, try to count the number of ball passes the white team made in the video below:

This video clearly shows that people see only what they’re looking fore. You did see everything, but you didn’t notice at first, did you?  🙂

The same goes for bicycles. Drivers expect two rather bright lights, other cars that is. That is what they look for. They look for traffic lights. But most of them don’t look for cyclists, not actively enough. That is why it’s not enough to be a big black bear, one needs to be a brightly coloured, shining one.  🙂

This is important to know in order to understand what kind of lights are good to have on a bicycle.

Lights that light the road well are important for unlit roads. However, all the night riding conditions (and low visibility conditions, such as fog, rain, dusk/dawn) and roads require lights that make cyclist be seen and noticed.

What kind of lights are these? Lights that shine bright, shine constantly, and do not blind the drivers.

Today, battery run lights are quite popular. Cyclists often leave them in blinking mode. This can be OK only if they are coupled (both front and back) with a constant shining light.

Because of a narrow profile, the whole bicycle can be covered by a wind shield post, or a land post. So, for example, when approaching an intersection, the driver has just a split second time to notice the cyclist until the view gets blocked. If during that split second, blinking bicycle light is in the dim phase, it is the same as if the bicycle had no light at all. This is especially important for front lights – coming towards other vehicles leaves a lot less time for being noticed.

Blinking lights are not even lawful in Serbia – I wrote in more detail about cycling related traffic laws in Serbia.

A car that has overtaken a cyclist, or came past them from the opposite direction no longer poses a threat to the cyclist. In order do pass safely, drivers must be able to correctly judge cyclist’s lane position and speed. Do you want a blind(ed) driver coming towards you? Didn’t think so.

Lights that are too bright and/or aimed too high will blind drivers and make a safe pass more difficult. That is why lights need be optimal – not too dim, not too bright. If you have a strong front light, make sure the beam is aligned correctly – slightly down and slightly towards the side of the road.

Apart from badly aimed lights, a common mistake is badly positioned bicycle lights. Strong front light should be mounted low. Just above the front wheel, or even lower, on the fork. This way road irregularities will be better lit and seen, and drivers will be less likely to be blinded by your light.

Weaker front light that is just used to be seen can be mounted high, on the handlebars. It’s beam should be facing downwards, so it doesn’t blind the drivers.

Rear light should be mounted higher and made sure it is visible. If luggage is carried on a rear rack, it needs to be made sure the light isn’t blocked by the luggage. If the bicycle doesn’t have mudguards, and the light is mounted on the seat post, it will be covered in water and mud when riding in wet conditions.

5. Should reflectors (“cat eyes”) be thrown away then?

Here too, the short answer is NO!

For the same reasons demonstrated in the video above. Being seen is not enough, one needs to be noticed by the drivers. Reflective surfaces help, especially in open, straight roads, where drivers often drive fast. A reflective vest provides a great surface, that can be seen from any direction the driver’s lights “hit” the cyclist. Reflectors on the wheels (spokes) increase visibility from the sides. Finally, reflectors on the pedals, or reflective ankle straps (Amazon affiliate link), move up-down while pedalling, effectively drawing the driver’s attention (when lit by the car’s lights, they too are not a replacement for having lights on a bicycle).

What are dynamo hubs, and what are their pros and cons? What are LED bicycle lights and what kinds of models exist?

Fog, dusk and dawn are especially dangerous. Drivers’ eyes are still adjusting to the new light conditions and with the sun low behind the rider (from driver’s perspective) the chances to be “invisible” are the greatest.

Double lights both front and rear are better than just one. It gives a bicycle a bit wider profile and provides a backup in case one fails. However, having one quality, well placed light front and back is quite OK.

In order to stay safe and visible, both at night and during the day, it is important to ride safely, with good lane positioning. How to do it is explained in these posts:

A few recommendations for decent quality lights. Click on an image below leads to Amazon.com search for on-line shopping (as an Amazon Associate I earn from qualifying purchases). Though it’s best to try out different lights in a local shop, see what suits you. Battery run (rechargeable, or not), or dynamo run – depending on your preferences and priorities.