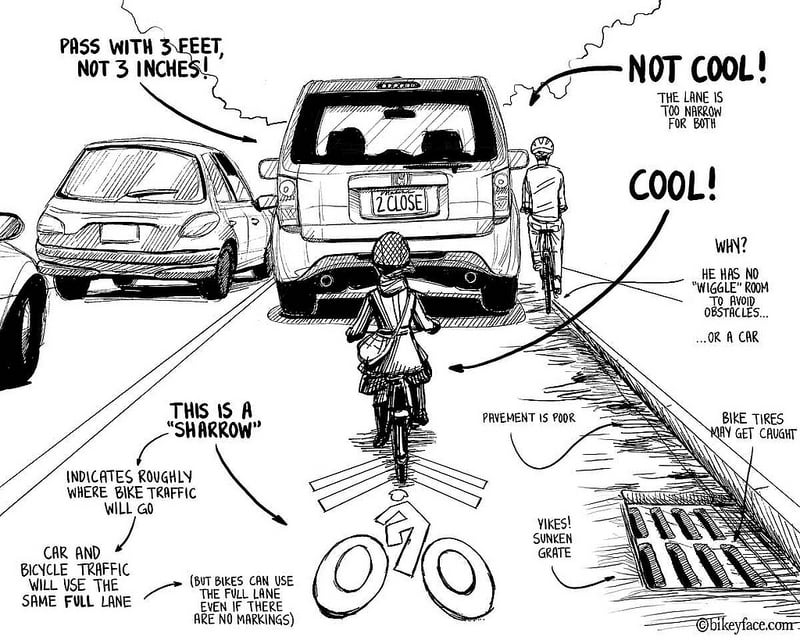 This post explains safe bicycle lane positioning and riding in traffic. With a bit of caution, bicycle can be ridden on public roads quite safely, even in heavy traffic. Post that explains basic things about human attention and noticing bicycles in traffic is here: Sorry, I didn’t see you – cyclist traffic safety.

All the advice in this post should be taken at one’s own risk assessment and comfort level. It is more a guideline, not carved in stone. Particular traffic situations one faces vary vastly (by traffic, road conditions and driver’s habits), so each should decide for themselves what the best thing to do is. Still, some guidelines and ideas given in this text could be useful to cyclists in traffic.

First thing explained are the differences between a bicycle and other vehicles. Then it will say a few words about relative speed, that is the speed difference between a bicycle and other (motor) vehicles. Term of blind spots – areas around vehicles invisible to the vehicles’ drivers is also explained. Finally, a few words about how lane positioning affects visibility. A separate post explains several common risky traffic situations and how to avoid them.

Term “bicycle” will refer to a cyclist riding a bicycle of course. Terms “car”, “motorcycle”, “bus”, “vehicle” etc will refer to the vehicle and the driver operating it.

Nor a motorcycle. Obviously. 🙂  Often, when discussing use of bicycles in traffic, one can hear things like: “when using the road, the same rules apply for bicycles as for cars. Bicycles aren’t exception and should behave like cars…” Well, not all the laws are the same (try riding a bicycle on a motorway without getting a fine), nor are the vehicles similar. What are the differences between a bicycle and a car and how to they affect safety and behaviour in traffic?

2. Relative speed and lane positioning according to it

When riding on a road, pay attention to usual speed of other vehicles. The faster they are going compared to the bicycle, the more it should move to the right side of the road – since there is less time for vehicles coming from behind to spot the bicycle and it slows them down more if they can’t overtake it. Of course, don’t move too much to the right if it isn’t safe – potholes, doors of parked cars etc.

When riding at the speed of other vehicles, bicycle can stay in the middle of the lane – since then bicycle is traffic as well.

When riding faster than the traffic, if safe, bicycle can overtake other vehicles – just like any other vehicle does. Passing it on the left hand side, of course.

This is just a general rule, with a lot of exceptions in particular situations. Some of the typical scenarios will be explained in the rest of this post.

There are areas around vehicles where drivers simply can’t see anything. When a cyclist is in a blind spot, they are literally invisible for the driver.

Unlike blind spots, zones of good visibility are marked green in the picture below:

With buses and lorries it gets even worse:

Why is it important to know (about) these blind spots? So that one can stay bloody out of them, of course! 🙂

When approaching a vehicle in order to pass it by, go around it, or even overtake it, one must be aware: when a bicycle is in a blind spot, it is invisible to the driver. So before entering a blind spot, use bicycles relatively low speed and the time available to look inside the cabin: where is the driver looking, how are their hands placed on the steering wheel, are the front wheels of the vehicle turning to one side perhaps? Check the situation around the vehicle. Could the driver be looking for a parking spot, to overtake another vehicle, or make a u-turn? If anything suspicious is noticed, it is a good idea to stop at a safe distance, before entering a blind spot.

When in a blind spot – move out of it as soon and as quickly as possible (and safe). Since a bicycle is considerably slower than motor vehicles, it is usually the best and safest option to slow down, or turn (if turning is safe and required).

It happens that a driver starts overtaking a cyclist, then, because of a congestion in traffic, continues driving slower, parallel to the cyclist, leaving the cyclist in the blind spot. In a matter of a few seconds, drivers can often forget about the previous overtake and the bicycle in their blind spot. The safest option (besides knocking on a window which will startle most drivers  🙂  ) is to slow down, letting the vehicle move in front, to a safe distance.

4. Lane positioning and how it affects visibility

One traffic lane, from a bicycle’s perspective, can be divided into three major parts:  A left car wheel track, B middle of the lane, C right car wheel track. In addition to these, there are extreme right (R) and left (L) position – hugging the ends of the lane.

Most conventional advice (and some regulations) suggests that cyclist should stick to the right most part of the lane – up to 1 meter from the kerb. This is fine usually and for most situations – but not always. How does lane positioning affect visibility?

Generally speaking, the more a bicycle is to the right hand side of the road (C, or R lane position), the less it is visible to vehicles coming from the opposite direction – especially if there’s some traffic in front of the bicycle in the same lane. The further it is to the left, the less it is visible to the vehicles pulling in from the right, if there is some traffic in front of it, if not, then the more it is to the left, the more visible it is. Middle of the lane is equally good (and bad 🙂  ) in those terms, but it makes it harder for the cyclist to see what’s in front of the vehicles in front of the cyclist.

Picture below shows a situation when moving to the right is a good choice. Simply – try to get eye contact with oncoming vehicle drivers as soon as possible. Moving left would “hide” the bike behind the red car.

Next picture shows a car pulling in from the right, with a big lorry blocking the view. Staying further behind the lorry and to the right is a good choice.

On the other hand, when there are no vehicles in front of the cyclist, better visibility to drivers is achieved by using the middle of the lane – since that is where the drivers are used to expect and look for oncoming vehicles.

As can be deduced from these pictures, it is the best policy to scan the situation around and adjust riding accordingly. There is no rule that can be given in advance, since situations vary so much. As a rule of thumb, always consider these questions:

A few more things to consider in corners and up/down hills:

When reaching a hilltop, or a bridge top, always move as far to the right as possible – you never know what’s on the other side. Perhaps something like in the picture below:

Somewhat controversial topic: is it OK to ride in the middle of the lane, practically taking the whole lane, as if a bicycle were a car. Of course, this also depends on the current situation. But it is good to know that taking the lane is also an option, sometimes even the best  one. This is explained in detail in a separate post, about risky traffic situations. Until having read that post, just one picture for consideration:

A more “philosophical” view on this topic is given in the post: Safe bicycle overtaking distance.

Drivers are people just like all others. No better, or worse. Bicycle is a lot less visible and a lot slower than a car. That should be held in mind. Watch out for yourself, but don’t take anything personal. If, to a driver you had taken the whole lane in front moments ago, you wave with your arm to pass you, moving to the side of the road at the first safe/convenient stretch of road, they will have easier time understanding your side of the story and perhaps be more tolerant.

Traffic is a communication. Communicate with other drivers. Look for eye contact, head movement, use hand signals. Have patience and understanding. In case of a conflict, don’t escalate it.

In the end, a few tips that can usually be taken as a rule of thumb: