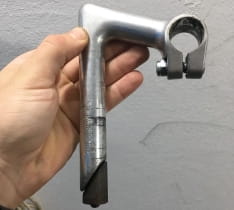 In this post, I’ll discuss some of the cycling industry patents I consider bad, and/or unsafe.

I see a relatively large number of bicycles. Many come in for a regular service/maintenance, but many also come because there is some kind of a problem (or, during a regular service, I notice a problem “emerging”, that still isn’t noticed by the rider).

Figuring out what had caused the problem(s) has always been very important to me. For both pure curiosity, and for safety reasons: to see if the problem can be prevented from reoccurring in the future, or at least noticed in time, so a bicycle failure doesn’t cause the rider to fall, or have a collision.

However, when I talk about the “risky”, inherently unsafe bicycle parts, like quill stems, or square taper bottom bracket axles, people are often in disbelief: “that never happened to me?!”, or “I don’t know this happened to anyone, there are thousands of bikes with that system!?” and so on. This is usual attitude when safety related topics are discussed. I think many mechanics (and police officers for that matter) know exactly what I’m talking about.

So I think it is a good idea to document all the bicycle (part) wrecks and failures in one place, both for personal record, and in case someone is in disbelief: I can just post a link. That is why I made a separate post where all the bicycle part failures are photographed and explained, but first I wish to explain the basics and the root of the problem(s).

Disclaimer: this is my personal opinion, based on my knowledge and experience. Different people have different experiences, and different opinions – this one is mine.

Many patents used in the cycling industry are unsafe – or prone to breaking/malfunctioning, often without a prior warning. There’s a lot more marketing and money making, than good engineering and common sense. Same bike shop, sometimes even the same bicycle manufacturer, will sell you a bicycle helmet, and a 16 spoked front wheel that will get locked against the fork after only one spoke failing (suddenly).

I can’t go back in time and photograph everything I’ve seen, but can at least document stuff from now on (now that I too have succumbed to having a mobile phone 🙂 ) as my attribution to changing things for the safer and, in my opinion at least, better (though I doubt anything can be changed, there’s too much money involved).

Initially I wanted to place this post in the bicycle maintenance website section, but I think it belongs to this, cycling safety related section.

3. Unsafe patents in the cycling industry

Before noting the patents I consider inherently bad, and/or unsafe, I must say that the same disclaimers apply as stated at the beginning of chapter 2. And an explanation: here I’m not talking about any manufacturing defects, or poor material choice, I’m talking primarily about the design flaws from the very start. Appropriate non-cycling related analogy would be designing high stiletto heel shoes for hiking (mountain climbing).

3.1. Quill stems and ahead stems with too few bolts

The main problem with quill stems is that everything is held by a single bolt. OK, they are also prone to seizing, so in that case the bolt plays no role. Either of those is bad in its own way. First a few descriptive images, then an explanation:

How does quill stem patent work, and why is it bad (unsafe)?

As it is shown (and oriented) in picture 2: bolt (1) gets tightened, pulling the quill (2) to the right and upwards (3), thanks to the angled interface. This keeps the stem stuck inside the fork’s steering column (in the picture it is deliberately left too much drawn out, so it can be seen what’s going on).

In addition to that, there is some space between the stem and the inside of the steering column (4 in picture 2), so water and sweat can enter and cause galvanic corrosion. This is why aluminium stems are prone to becoming “welded” to the inside of the fork. Which prevents headset bearing service and/or replacement, or stem replacement.

There are headset cups with a rubber seal, but because of the elastic deformation of the materials, these seals don’t prevent water intrusion, they just reduce it somewhat.

Until it is welded in place, quill stem poses a danger. In case the bolt breaks (1 – in picture 2), and they break due to material fatigue, without prior warning, the stem becomes loose and you have no steering using the handlebars! It is all held in place by that single bolt.

Of course, you could take the bolt out, clean it and inspect it every week, but that is highly impractical, often requiring disconnecting brake, or shifter cables, or at least removing the levers off the bars (you could just remove the bolt without pulling the stem out, but in that case the quill can drop and get stuck inside the fork).

Another downside of this system is the difficulty of setting the optimal headset bearing preload.

Advantages? Simple adjustment of handlebar height (unless the stem is stuck, which is often the case). In practice, ahead stem system is superior in every way:

With well designed ahead stem models, two bolts hold the stem attached to the steering column (1), while four bolts (2) hold the handlebars – so in case of any bolt breaking, one can safely come to a stop and replace the broken bolt. When one bolt breaks, the others become slightly unloaded, so the probability of simultaneous breaking of more than one bolt is very, very, very low.

Square taper axles hold the cranks in place using preload and elastic deformations of the materials. However, due to relatively high loads spread over a relatively small area, there is some fretting damage that occurs on the crank to square taper axle interface.

Because of the way cranks are mounted (and dismounted), it is highly impractical to remove them weekly for axle inspection. While cracks (axle failures) happen without noticeable prior notice. Cracking happens more often on the left crank attachment part, because there the axle transfers both the rider weight and the chainring turning torque (right crank is directly attached to the chainrings so it doesn’t transfer the torque over the axle).

When the axle breaks, crank falls off, and rider can be lunged towards that side (with the bicycle swerving to that side) – dangerous in traffic, or on some technical roads/terrains (for example, pedalling up hill, while standing, with a car overtaking you at that moment).

More modern Hollowtech 2 cranks are easier to dismount and inspect the axle condition. These axles crack at their bearing contact area, in case bearings get seized, so the axle starts scratching the bearing inner race while cranks are spinned. Checking if bearings are turning easily can be done even without removing the cranks. It would be safer if Hollowtech 2 axles were made of steel, instead of aluminium, but that would add about 100 grams more mass (weight), making it more difficult to sell it to cyclists at a high price/profit.

Pedal to crank interface is flat for all the pedals, instead of being tapered at 45 degree angle. Due to elastic material deformation under pedalling load, flat interface is prone to fretting damage, which can cause cranks to crack.

This damage eventually leads to cracks protruding near the pedal interface. This can be seen with the naked eye, so at least one can replace the cranks in time, before something like this happens:

This way adapted interface solves the problem. Why isn’t this made as a standard? Perhaps it costs a dollar more to manufacture, and no one really cares. Cycling is fashion and marketing before engineering – for decades now.

It is interesting that bolts that hold car wheels are also made using this 45 degree angle, to prevent them from unscrewing due to vibrations, and/or from breaking. Using such interface would allow for the left pedal to have a normal, right handed thread, without it unscrewing and falling off.

I already wrote about the optimal number of spokes for bicycle wheels. What is the problem with the “modern, super-aerodynamic” bicycle wheels that have fewer than 32 spokes, often only 24, or even fewer?

Looks awesome, doesn’t it? 🙂 In case only one spoke breaks, such wheel can come out of true so significantly, that it can get locked against the frame. Spokes usually break due to material fatigue, suddenly and without prior warning.

Choosing good quality spokes, and achieving even spoke tension when building wheels, reduces the probability of spoke failure, but it’s still not impossible for a spoke to break.

They look “cool”, and a few grams of weight are saved because slightly shorter spokes are used when lacing radially, compared to cross laced wheels. Apart from poor transfer of loads, radially laced spokes put a tremendous load on hub flanges.

While the force of cross laced wheel spokes tension is cancelled out for the most part (spokes pull to opposite sides, effectively compressing the hub’s flanges), tension of radially laced spokes tends to rip hub’s flanges apart. Then this can more easily happen:

In this particular case, the hub most probably had a manufacturing defect, or suffered some prior abuse, since it had cracked even though it was cross laced. Radial lacing greatly increases the chances of this happening.

3.6. Carbon forks, frames, and other parts

Carbon fibre bicycle parts have become very popular. “Super-light, and super-comfortable”. However, compared to metals, carbon fibre has one bad property: the mode of failure.

With metals, cracks usually happen on the outside, visible to the naked eye (sometimes very thin, like a strand of hair, but still visible). With carbon fibre, cracks (fibre delamination) are often invisible, until a sudden, catastrophic failure.

Luescher Teknik YouTube channel is full of educational videos on this topic.

Is carbon bad, unsafe? By no means – it is a phenomenal material – fibres of the future! However, both new, and especially used parts, need to be (regularly?) inspected by a professional, with appropriate equipment, to ensure they are safe.

This is something to note and pay attention to (no one in my country offers this kind of service, not that I know). Even renowned manufacturers (I won’t say “good”, but they are expensive) don’t have what I’d call a good quality control.