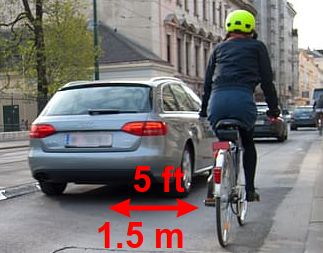 “Be careful what you wish for, it might just come true.”

In this post I’ll write my thoughts on a topic that is often debated in media and various cycling initiatives: should there be a law proposing minimum passing distance for vehicles overtaking bicycles? Most things written here are my own thoughts, reasoning and experience. In a separate post I wrote about cycling related traffic laws in Serbia.

I’m an avid cyclist. Love motorcycles as well, but bicycles are my first love (when it comes to vehicles for transport and for sport). With lots of experience cycling in traffic – both in congested city traffic, and various kinds of open roads. Cycling every day – bicycle is my only means of transport (groceries, kid transport, commute to work, tools hauling…).

Motorcycle is used for fun only. Car (and van) only for work when necessary.

I hope this gives a good perspective on where I’m coming from. It’s written because some of my thoughts on cycling in traffic results in furious reactions with some cyclists, even more with some “cycling advocates”. After all, this site itself speaks how much I value and love cycling and bicycles.

Current law, at least in Serbia (where I live), says that a bicycle must be ridden inside 1 meter (3ft) from the rightmost end of the road. In my opinion, such law is dangerous. It should say: “as close to the right as it is safe, based on current traffic and road conditions”, or something similar. To not take the space here, I wrote a separate post on this topic: Cycling in traffic [02] Lane positioning. There, I explained why it is sometimes safer to ride along the left side of a traffic lane, sometimes in the middle and sometimes all the way to the right. Explaining what to look (out) for and how to choose the safest position. It still boils down to keeping as far to the right as it is safe, only sometimes (not always) that place (as far to the right as safe) is along the left side of the lane.

What I noticed some “cycling advocates” and cyclists propose is “taking the lane” – either riding in the middle, or nearer to the left side of a lane – all the time. In the above linked article I listed examples (with pictures) when such lane positioning is more dangerous. So, even if we don’t care about holding up the traffic (I’ll talk more about this later), sticking to one lane position regardless of the road and traffic conditions is irrational, needlessly risky.

3. Same laws for bicycles and cars?

Another thing that “cycling advocates” often talk about, in an attempt to get better position (they call it “equal”) for cyclists, is that bicycles are the same as cars. The truth, painful to some: bicycles are not the same as cars. For a majority of European cities for example, bicycles are much better! For going 500 miles in a day, on a motorway, a car is a far better choice. For 500 miles of twisty country roads – give me a motorcycle (or, better, a bicycle and a few days off 🙂 ).

For one, many laws recognize “slow moving vehicles”. Like tractors and other agricultural machines. Allowing overtaking those even across a full (no passing) line. With a good reason. A slow moving vehicle can create a congestion, a hold up, that gets people frustrated. You may not like this, but humans are only human, until all the cars are driven by robots, it is something real to account for. In addition to that, overtaking a slow vehicle takes very little space and it is safer than overtaking a fast moving vehicle. Additional advantage of such passing laws is that then not everyone must drive at the speed of the slowest vehicle.

Secondly, you can carry a bicycle over the stairs, through a passage (shortcut) between buildings, ride it over the sidewalk (with due caution), over a lawn etc. – all the things that are a lot more dangerous, or impossible to do by a car.

Thirdly and this is very important, a bicycle offers a lot better visibility, since you are not inside a metal cage with windows and your back stuck against the seat. You can easily turn and see 360 degrees around.

Fourth – the probability of injuring a pedestrian, or a car passenger, with a bicycle is very, very low. Most of the time, you are the one in danger.

Finally, a bicycle is much narrower, even narrower than most motorcycles, not to mention cars.

For these reasons, I think that the following things are quite reasonable:

This leads us to the main topic of this post:

4. What is the safe distance for overtaking cyclists?

Imagine the following scenarios, in each you are driving a car and approaching to overtake:

Serbian law still says: “passing distance must be enough for safe overtaking”. Which is perfectly fine and common sense in my opinion.

Personally, if I realize I’m creating a jam, I move all the way to the right at the first safe spot (sometimes I even stop) and wave the drivers to pass me. It’s absurd for me alone to hold the traffic, especially if a bus carrying over 50 people is behind me.

Also, from my experience, when drivers see I’m riding a kid on the bicycle, or riding insecurely (snow and ice for example), drivers always leave more room when overtaking.

“But I feel uncomfortable when they whizz close past me”.

I agree, it’s not always pleasant. Still, the number of accidents when cars hit a cyclist when overtaking is by far the lowest, most accidents come from not giving way. I wrote about how to avoid this in post: Cycling in traffic [01] “Sorry, I didn’t see you!”

When driving a small car, getting overtaken by a large truck is also not very comfortable. Yet we don’t see anyone advocating a minimum passing distance for that.

Extreme direction where giving in to the mentality of “I’m uncomfortable and scared” is making all the people who are big and “mean looking” to walk with handcuffs (“dangerous dogs” already have to wear muzzles in most cities).

This extreme digression aside, when thinking about laws, one must have the entire social effect in mind. The street I live in is quite narrow, with lots of traffic. It is impossible for a car to overtake me with 5 feet space, except if I ride dangerously close to the kerb (and parked cars that might open a door). OK, you might say, then let all the cars drive slowly behind me. Now, imagine I’m old and not very fit and ride under 10 mph (like many citizens do). This would result in blocking both my street and all the intersections. In addition, it would slow down all the other cyclists.

Remember the quote at the beginning of this post?

5. What is a solution then?

Solution is the most difficult one and the best in the long run. Raising awareness.

Drivers should attend courses (in driving schools) on how to pay attention to cyclists. They should experience, in controlled, safe conditions, what it is like when a bus whizzes past you at 2 feet distance while you are standing. All the people should be taught to open car dors with the far hand, since this makes them turn and so they will be able to spot a cyclist coming from behind. Also called “Dutch reach” (on his website, you can read John Allen’s discussion on Dutch Reach – I agree with his points, though think there’s no harm in teaching the drivers to open the doors carefully, not just for cyclists’ safety sake).

Cyclist should be taught to stay away from the door zone (read the post: Typical risky situations for cyclists in traffic).

All the people should be taught to act cautiously and predictably in traffic, to signal turning, or stopping in time.

Cycling infrastructure should be developed – this enables kids and the insecure adults to start cycling. Reducing traffic congestions. Bicycle lanes should not be drawn within parked cars door zone.

Making bicycle theft a serious crime and placing the solving of such crimes higher in the police priority list. Because bicycle theft creates great damage to the society. It discourages people from using bicycles. When more people cycle, there are less traffic jams and the society is healthier (cutting on medical bills for one, while cities are not made uninhabitable, with all the space taken by parkings and more roads – which never suffice – more on this in the post: Are cars sustainable?). Likewise, more cyclists leads to drivers getting used to them, hence making the cyclists more visible (drivers will be looking out for them, expecting the narrow slow moving vehicles coming down the road they are about to turn into) and safer.

On the other hand, forcing the drivers by law to always pass cyclists at a 1.5 m (5 ft) distance, or by completely changing lane (as some are advocating) will create many problems and I don’t think it would make cyclists safer, quite the contrary.

A bicycle is not a car – this should be used for advantage of both cyclists and drivers.

Common sense and tolerance. Neither cyclists, not the drivers are sensitive snow flakes, or Indian holy cows, so that everything must be subordinated to suit ones, or the others. Just don’t be a git: neither cycle in the middle of the road when it is not needed, nor pass a cyclist closer than it is safe.

What should not be allowed is for lobbying of various associations, media and “public opinion” to influence the law making – or, to be more precise, not without discussion, expert assessment and close, careful examining of facts and statistics. Fear of “I’ll get hit from behind” is irrational, similar to the fear of having a piano land on one’s had when walking past tall buildings – by far the most bicycle related accidents happen when cyclists and cars are going towards each other.

Germans have apparently introduced a minimum passing distance of 1.5 metres in the cities and 2 metres on open roads, from the start of year 2020. Link (in German) – new 2020 German traffic rules. By the end of 2020, one could gather the statistics and see if the number of bicycle accidents where cyclists are hit from behind has decreased. That would be a good start.