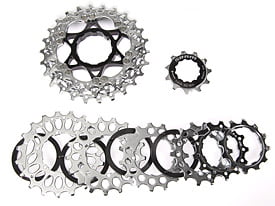 This post gives a short overview of “bicycle speeds” in terms of rear sprocket (chainring) count. A series of articles explaining which sprockets can be matched with which derailleurs and shifters can be found here: Bicycle parts compatibility. For more details on cassette standards, read: Bicycle cassette (rear chainring) standards.

For detailed explanation how rear sprocket size (tooth count) affects gearing of a bicycle, read: Bicycle gear ratios – “speeds”. Here the emphasis is on the standards for sprocket spacing and thickness for various numbers of speeds – ranging from 6 to 11 in modern bicycle drivetrains.

SRAM and Shimano sprockets (along with Miche, SunRace, IRD) are compatible, with no significant differences, while Campagnolo has different, incompatible dimensions, but the same tendency that the more sprockets, the tighter spacing and narrower sprockets. Where it is not noted for Campagnolo, sprocket thickness and spacing dimensions in this article are given for Shimano compatible standard.

Freewheels and cassettes with 6 sprockets usually have sprockets arranged at 5.5 mm distance (center to center of adjacent sprockets). Some (discontinued) models are spaced narrower. Sprocket thickness is 2 mm.

Campagnolo 8-speed has sprockets spaced at 5 mm each, with sprocket thickness at 1.9 mm.

Cassettes with 9 sprockets have tighter sprocket spacing (each at 4.34 mm) as well as narrower sprockets (1.78 mm).

Tighter and narrower. Sprockets spacing 3.95 mm, 1.6 mm wide. Sprockets this thin aren’t strong enough, so most manufacturers pack the largest 3 sprockets in a single “cage”, in order to make them stronger in these (slowest) gear ratios where most torque is applied. For a short period Shimano used to make special freehubs for 10 speed cassettes, with higher splines. 10 speed cassettes have deeper spline grooves than 8, or 9 speed ones. This is in order to make contact area larger, because it is known to happen that some 10 speed sprockets dig into freehub splines if they are (the freehub splines) made of aluminium.

Campagnolo uses variable spacing between individual sprockets, with each sprocket being 1.7 mm wide. Spacing varies from groupset model to model, it isn’t the same for each groupo.

About the same sprocket width (1.6 mm) as the 10 speed, but even tighter spacing, now down to just 3.74 mm. Road 11 speed cassettes require freehubs with about 1 mm wider splines, in order to accommodate all the 11 sprockets.

Road 11 speed is the only system where Shimano, SRAM and other cassettes (and hubs) are compatible with Campagnolo. Chain is slightly narrower than a 10 speed one.

With 11 speed MTB cassettes, whole cluster is as wide as 10 speed one – the largest sprocket “climbs” onto the freehub end, since it has big diameter, so it doesn’t interfere with spokes (since spokes move away from the cassette at an angle, towards the wheel rim).

As of mid-2018, SRAM has introduced NX Eagle groupset, that includes 12 speed cassettes compatible with Shimano (and SRAM) standard freehubs (for 8, 9, or 10 speed cassettes). However, they don’t allow for the smallest sprocket to be smaller than 11 teeth.

As of 2018 summer, Shimano has also made their MTB 12 speed system.

Division of cassettes on road and MTB is mostly marketing. The only important factor is the number of sprockets (cogs). All other things: sprocket width, spacing, cassette width etc. are the same. Except for MTB 11 speed cassette (explained at the end of the last paragraph).

The only difference is that cassettes marketed as road cassettes have smaller difference in teeth count between adjacent sprockets. Also, MTB cassettes usually have a pretty large largest sprocket – to help climbing in off-road terrain.

With 9, 10 and more speeds – the chain is narrower, sprockets are tightly spaced, so a 0.1 mm offset can be significant, felt, cause bad shifting, chain skipping gears etc.

Sprockets for systems with more than 8 speeds are narrower, so they (and the appropriate chain) don’t last as long, they wear faster. With 10 and more speeds, sprockets are so narrow that they can dig into the hub splines when under pedalling load (the largest 3 sprockets are usually chained together, but the rest of the cassette is not).

When placing cassette sprockets on a freehub, one should pay attention to spacers lineup. Depending on the freehub type (and the number of speeds mounted on it), a spacer or two might be needed to mount before the cassette is placed. After that, spacers are placed between some sprockets, depending on the cassette type. If this is not aligned in proper order, there will be problems when shifting speeds.