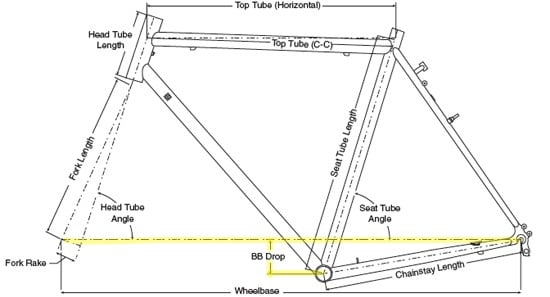 Frame is the spine and the heart of a bicycle. All other parts can easily be swapped, but the frame is what determines what combination of parts a bicycle can accept, what kind of use bicycle is best for and what seating positions can be achieved on a bicycle.

For example, frame choice determines what kind of brakes a bicycle can accept (disc, v-brake, or road bike brakes), what the maximum tyre width is, whether mudguards and racks can be mounted etc. This is easy to tell when choosing a frame – what kind of mounts it has. Also, producers mark these things in prospects (e.g. “disc brake frame” etc.).

Another thing that frame choice influences is seating position, comfort and bike handling. However, it is a lot less straight forward (than disc and mudguard mounts) and this post will explain how geometry influences ride and fitting characteristics. For an explanation of how frames are made to be strong, yet light, see the post: Bicycle frame design explained.

When it comes to bicycle frame geometry, good manufacturers usually provide a table with lengths and angles. For example:

As it is shown in the table above, geometry differs (more or less) for each frame size, even with the same model, of the same producer. Frame geometry is especially important if carrying loads on the front is planned (e.g. front panniers), since steering is usually calculated with expected front load in mind.

Text will give common values for a typical touring and a typical road bike frame. Both frames sized for an effective top tube length of 57 cm.

Effective top tube length is explained in this article: How to choose a correct frame size.

2. Steering – front part of the frame

Front part of the bicycle, along with the fork, has three important factors:

Angle is measured compared to the horizontal, with both wheels of planned size (usually the same size). In mechanics literature, this is called “rake”, while in cycling literature, “rake” is used for referring to fork offset (explained in chapter 2.2.).

Rake influences distance of the front wheel from the pedals and wheelbase length. It also affects steering but by increasing/decreasing trail, not directly, which will be explained.

Touring bikes often have a lot of rake, in order to increase wheelbase as well as to avoid toe overlap.

Typical values are 45 mm for touring and 40 mm for road bicycles.

Still, since rake is in conjunction with trail (and head tube angle), touring bikes end up having slower steering compared to road bikes, in spite of having more rake. Explanation follows now:

Touring bicycles have more trail, in order to slow the steering and make heavily loaded bicycle more stable on a fast descend for example. The problem with having more (or too much) trail is difficulty to keep a straight line when riding at slow speed. Also, it can cause bike to steer from side to side when pedalling while standing. Heavy front load on touring bikes often compensates for this.

Typical trail values are around 65 mm for touring and 55 mm for road bikes.

Slacker head angle and more trail results in slower steering. Practical for carrying loads on a bike, while not very convenient for a light bicycle.

Somewhere in between those extremes falls the steerer geometry of most cyclocross and hybrid bicycles.

In the article about bicycle forks I also briefly discussed how fork length affects steering and frame geometry.

Typical values are 46 cm for touring and 41 cm for road bikes.

Touring bikes have slack head angle, long fork rake, and long chainstay which gives them long wheelbase. Road bikes have it all the opposite way.  🙂

The influence of wheelbase on steering is almost as big as the fork trail and angle.

Because saddle height is set relative to the pedals, lower bottom bracket results in the saddle being placed lower (for the same rider height), which results in a lower centre of gravity.

Lower centre of gravity is always good – it gives better stability and maneuverability. However, since bicycle is leaned into turns, this matters a lot less than for cars.

What does matter is ground clearance. Frames built for off road riding often have lower BB drop (hence a higher bottom bracket) to prevent it from catching bumps and rocks. Also, when pedalling in a turn, a bicycle is less likely to strike the ground with a pedal if the BB is higher.

For city riding, lower BB enables the rider to put a foot down wile seated and waiting at a traffic light.

All other things being equal (wheelbase, tube material and thickness), a smaller BB drop (therefore higher BB) makes shorter chainstay, shorter seat tube and down tube. This results in a lighter and stiffer frame.

Values differ, depending on the frame purpose, but some middle, often used value is around 7 cm.

This depends mostly on frame size, since optimal pedalling position does not change that much between bikes.

Often stated as frame “size”. One of the least important factors in frame geometry. Value is important only to shorter riders to know whether they can stand over the frame.

If a frame is meant for a more upright riding position, head tube is longer. Touring bikes often have around 20 cm, while road bikes go around 15 cm. Head tube length changes with frame size.

My video explainig and showing the basics differences in road, and trekking bicycle frame geometry, along with the basics of fitting (i.e. setting up a comfortable riding position):