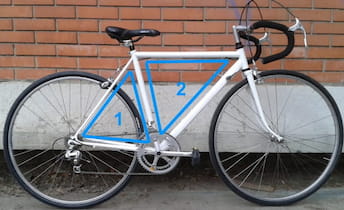 In this article I’ll explain bicycle frame design. Why do most frames come with a high horizontal top-tube, that is often difficult to step over when mounting, or dismounting? How are the modern frames made to be rather light, while still being strong enough?
The emphasis of this article is on weigth and strength. To understand how tube angles and dimensions affect ride characteristics and handling, se the article: Bicycle Frame Geometry.
For the info on materials, see: Bicycle frame materials – explained.

If you look at bicycle frames, you will notice that most models are based on two triangles:

Over a hundred years of experience has shown that this construction gives the highest possible strength, with the thinnest (and lightest) possible tubes. At least when it is required to carry rider’s weight, pedalling force, pulling on the bars, and handle the road bumps.

Lighter, heavier? What we really measure is mass. Weight we measure when standing on a scale, is mass drawn by the Earth’s gravity. But that’s a topic for a separate post. For this one, we will say that weight = mass (sorry, Sir Newton).

Step-through frames have only one, rear triangle. They are designed for more convenient getting on and off the bicycle, but that comes with a price: such design requires the tubes marked as “A” and “B” in picture 2 to be a lot stronger, thus heavier, to get decent frame strength, compared to using the two-triangles design. Sometimes step-through frames have only one very thick and heavy tube, instead of two, which is usually even worse in terms of total frame weigth.

Let’s repeat: if you want a frame to be as light as possible, while still being strong enough, build it using two triangles.

No matter how convincing the sales people may sound, techically there is no advantage in having an angled top tube. However, designing a frame with a horizontal top tube, so that all the other measurements are appropriate, takes a lot of knowledge and experience (see bicycle frame geometry article for details). It’s a lot easier to just slope the tube, and not care where it lines up.

Bicycle frame tubes are mostly compressed (compressive loads), bent, and twisted (torsion loads). They generally take no loads that are trying to stretch them.

Seatstay tubes (marked green in picture 5) take so little load, that they are always a lot stronger and heavier than necessary! Why don’t they make them lighter? Because further thinning down of those tubes’ diameter, or walls, would make it impossible to weld, or glue them to the rest of the tubes. You still need some material to hold on to.

Here I’ll explain bicycle forks in terms of strength, weigth and load. For other important fork-related subjects, you can see:

Bicycle fork has a relatively stong and stiff top part – the steerer column. It is placed inside the frame’s head tube and held in place by headset bearings.

The top part is strong and well anchored, while the wheel exerts force on the fork from the bottom end, using the entire fork leg length as a lever. This is why fork gets most highly stressed and loaded at the section right below the head tube, where the legs start going out.

Forks often start cracking at the rear part, near the top (arrow 2 in picture 7). Width of the fork legs shown in picture 7 is a good indication of the amount of load taken by different fork leg sections. This is a good opportunity to bust some common myths, by providing some facts:

Many modern forks are made with an angle at the very top, where the forks exit the head tube, with straigh legs. Especially suspension forks. This is done because the construction, or the materials used are not practical to make the narrowed down, and bent shape near the bottom.

When the brake is applied, braking force, over the rim, tries to pull the brake caliper out of the fork, towards the front side, effectivelly pulling the fork forwards. The force is concentrated at the top part of the fork – where it is thick and strong, well supported by the head tube. Lower part of the fork legs is pushed towards the rear by the inerita of the slowing down rider and bicycle, bit in order to bend backwards, fork legs would simultaneously have to push the front part of the bicycle up a bit (see the curve). So this force, which isn’t too strong, is further negated by the very weigth and inertia of the rider and the bicycle.
Simply put: rim brakes don’t put much load on the fork.

What about disc brakes?

With disc brakes, almost entire fork length is used as a lever over which the braking force loads the top part of the fork (L in picture 9).
At the same time, as the wheel and the brake disc are trying to turn, brake caliper is holding up the disc, effectivelly acting as a fulcrum, around which the wheel attempts to turn, which exerts a downward pulling force, trying to get the wheel out of the dropout. Thru axles prevent this, but open ended forks should regularly be ckecked for the tightness of the wheel holding bolts, or quick-release levers. This doesn’t happen at once, but after many micro-movements, because bolts have a tendency of turning in the direction of lower preload, whenever they get moving.

In addition to that, braking force pushes the brake caliper forward, while trying to pull the bottom of the fork backwards – exerting some bending force at the fork’s lowest part.

This is why disc brake forks need to be a lot stronger and heavier than rim brake forks.

Why are bicycle frames made of tubes, not of rods?
A tube is a rod with a hole! 🙂

Remember the 2nd chapter, about the types of loads that bicycle frames face. Before the boring theory, a practical example:Say we wish to make a frame that is as light as possible, while being strong enough to carry us. To keep it simple, let’s try doing it with steel (more on various frame materials in a separate article). Let’s begin:

We could try rods with a 2 cm diameter (thickness). Let’s see… hmm… those are quite heavy. Should we go with thinner ones? Bugger – now it’s too flexy! I know, we’ll try the 100+ year old trick: let’s use tubes!

If we take 3 cm wide tubes, with walls 6 mm thick, we’ll get a stiffer, stronger and lighter construction! Great.
Let’s see about 4 cm wide tubes with 3 mm wall thicnkess. Uuuh – even lighter, and a bit stiffer and stronger.

Let’s go crazy – 5 cm wide, with 0.1 mm wall thickness! What’s this? They can’t be welded together! They dent easily if you hit them!

Let’s explain what happened here – and why.

First thing to note is that a 2 cm wide rod is stronger and stiffer than a tube of the same diameter. However, with an increase in diameter, both strength and stiffness also increase drastically. So a wider tube can have relatively thin walls, that make it quite light, and still be as strong and stiff, as a lot heavier (and thinner) rod.

The ratio is about this: tube’s stiffness increases by the third power of the increase in diameter. If we compare two tubes with the same wall thickness, one having a 2 cm (d1), the other having a 4 cm (d2) diameter, then the second tube will be 8 times stiffer.
(d2-d1)3

The second tube in this example will be 8 times stiffer, but also 2 times heavier. We could reduce its wall thickness (keeping the outer diameter unchanged). This will make it a bit less stiff, and a lot lighter. However, even if the stiffness is cut in half, that’s still 4 times stiffer than the first tube – yet lighter! Increasing a tube’s diameter increases its stiffness a lot more than thinning down the tube walls decreases stiffness.

But – there is a limit of how thin the walls can be. Below a certain wall thickness, tubes can’t be welded together (they just burn through). Likewise, walls that are too thin result in a tube that is too easily dented from the slightest blow. Now I’ll use another example:

Take a small Coca-Cola can. Put it upright, on the ground. Stand on it gently, and slowly transfer your weight on it. If you make sure to keep the load vertical, and do this gradually, it may hold your weight. However, if you put a dent in the can’s walls, even the slightest, before attempting this – it will quickly and easily get squashed.

What has this got to do with bicycle frames? Bicycle frame tubes, like all the other tubes, loose a lot of their strength if their walls get dented. This goes especially for the down tube, and the right chainstay.

You will often read this in brochures for expensive aluminium, or steel frames: double, or triple butted tubes. What does it mean?

Remember the problem of welding the tubes with walls that are too thin? What if we make the tube ends a bit thicker-walled, and make the mid section with thinner walls? That’s what this technique boils down to.

This technique does raise the tube production costs, but it enables making the frames even lighter, yet almost just as strong.

Has this article helped you understand why bicycle frames are built the way they are – and why I recommend against buying 2nd hand bikes with dented tubes?

I tried to explain the basic challenges frame designers need to overcome. In a separate article I’ll write about the pros and cons of various frame materials.