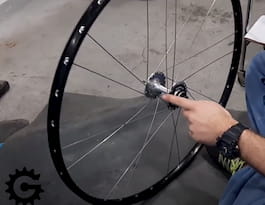 I explained the basics of how bicycle wheels carry load and what is needed for them to be strong (the choice of good quality components) and durable in the article: Bicycle wheels – how many spokes? I also made a series of YouTube videos on how to build bicycle wheels. In the videos I explained and demonstrated most things, but I like having it all in text format as well, for easier searching and reference – it’s often faster and I like it. 🙂

In this post I’ll write about the technical part, that is – the wheel building process. I’ll also briefly recapitulate the information about the quality of components chosen.

If one is replacing only a rim, or a hub, the component choice is somewhat “easier”, simpler, since the other components do limit the available choices. So for this text, I’ll start with an assumption that a wheel is being built from scratch.

I also made a YouTube video where I explain the types, quality and choice of bicycle wheel components.

I’d start with the choice of hubs. Depending on whether a wheel is built for a road bike, or for a MTB, whether it is the front, or the rear wheel, whether one uses disc, or rim brakes – hub choice will differ. The choice of hubs depends on the frame as well – whether it accepts quick release, or requires a through axle.

Then, if it is a rear hub, it is important to know the width of frame’s rear dropouts. In a separate post I wrote about the rear hub width standards. This will further narrow down the hub choice.

Another thing to determine is whether the bicycle frame is made for rim, or disc brakes (the linked article discusses pros and cons of each). Since there are hubs for disc brakes. Disc brake hubs will also work with rim brakes, but are (needlessly, if using rim brakes) more expensive and heavier.

For rear hubs, it is also important to note how many sprockets are used and which make of shifters and derailleurs are on the bicycle (Shimano, SRAM, or Campagnolo notably). I explained this in the article about rear hub compatibility.

Within all these parameters, that are determined by the type of bicycle the wheel is being built for, it is left to choose how many spokes should the wheel have. In terms of easier sourcing of good quality, reasonably priced rims, and for more durability, I would recommend 32, or 36 spokes. The number of spoke holes in the chosen hub will affect the number of spoke holes the matching rim should have.

For rims it is important that they have the same number of spoke holes as the chosen hubs (and vice-versa).

I think that double walled aluminium rims are among the stronger, more durable, yet not too expensive, nor too heavy.

Inexpensive and good quality solution are the standard, with a “J” bend at the elbow, 2 mm thick, preferably thinned down in the mid-section to 1.8 mm. Such spokes are also called “swaged” (some spoke manufacturers, like DT Swiss, refer to such spokes as “double butted“, while the ones that have wider elbow part compared to the nipple thread part, with still having narrowed down mid section are referred to as “triple butted“).

Narrower spokes are a bit lighter, “more aero” (the modern buzz-word), but are less durable.

2 mm swaged spokes thinned down to 1.5 mm twist a lot when they are tightened, making the wheel build very difficult, without providing much benefits.

Thinned down mid-section of swaged spokes acts as a kind of a shock absorber, being more flexible, thus relieving some stress from the spoke ends – which are the critical parts where spokes fail from material fatigue most often. Perhaps a bit counter-intuitive, but that’s how it is. It should also be noted that this thinning down is done at the factory, by rolling, not by grinding, so that the material structure is kept in tact, without creating a weak spot prone to material fatigue.

With spokes, another important aspect is their length, but more on that later.

Nipple length of 12 mm is best in practice, unless the rim is exotic and needs longer nipples. Wheels are built most quickly with these and the interface is strong and durable. There are longer nipples available – notably 14 and 16 mm.

As for the material, there are aluminium and brass nipples. Aluminium ones are lighter, but also less strong and more prone to galvanic corrosion (Wikipedia article), so I avoid them.

In this video, at 2:48, I explained the spoke lacing patterns (link should open YouTube, starting at 2:48). But here is the explanation in textual format.

Exotics aside, there are two ways of lacing bicycle wheels: radially, and crossed. Before more detailed explanation, a couple of pictures that speak more than words:

Radially laced wheels have spokes going straight from the hub to the nearest rim spoke hole.

Cross laced wheels have spokes going at an angle, to a spoke hole in the rim, crossing over other spokes on its way. The number of crosses can be smaller, or greater. More on that later, but our wheel has 4-cross lacing pattern.

When counting the number of crosses, people often miss the first crossed, adjacent spoke (painted in blue in picture 7).

All else being equal, cross laced wheels can take a lot more load than radially laced ones. Radial lacing is practically only used for show (and minimal weight savings since they require shorter spokes). I’ll explain why.

Picture 8 shows an example of pedalling force – wheel is depicted from the left hand side. When braking using disc brakes, the force acts in the opposite direction, by ground “pushing” against the rim.

Spokes being pulled (trailing spokes) get tightened, while the ones laced in the opposite direction (leading spokes) get a bit less tight (loosened). Number of crosses can be smaller, or greater.

The other force faced is lateral movement of the rim, relative to the hub – usually by ground pushing against the rim, over the tyre, of course.

For an example, look at picture 9 and imagine the force acting on the right hand side of the rim, in the direction from the viewer, towards the blue door in the background. The spokes near the point where the force is used will be mostly affected. The ones closer to the door will become loosened (since the rim is moving towards them), while the ones closer to the viewer will be tightened.

To better resist such forces, spokes are laced at an angle relative to the hub, so that the hub’s flanges can be used as a lever, to oppose this force.

The greater the spoke angle (i.e. the more spoke crosses there are), the better will a wheel cope with lateral loads. Imagine if the red spoke in picture 10 were going all the way across the head of the adjacent spoke (painted blue and marked with a red arrow). That would make an even longer lever. However, that would make replacing a broken spoke difficult, because the access would be blocked. Also, head of the spoke would create a bend, kink, in the spoke going over it, making it weaker. That is why it is important to choose the optimal number of crosses. Picture 10 shows just a bit of overlap – borderline acceptable amount.

3.2. The optimal number of crosses

The number of crosses should be such that the maximum angle of spoke relative to the rim is achieved, but without the spoke going over the head of the adjacent spoke.

The actual number of crosses that achieves this mostly depends on the total number of spokes (and on the hub flange and rim diameter, to a lesser extent). How so?

A 36 spoked wheel has each rim spoke hole at 10 degrees angle (360/36), while each hub spoke hole on each side is at twice that angle (since half spokes go from one side, the other half from the opposite hub side).

If we took a 20 spoked wheel, each rim spoke hole would be at an 18 degree angle, with hub flange holes being at 36 degrees from each other.

Spokes go in groups by 4:

Simple, practical way of determining the optimal number of spoke crosses:
Divide the total number of spokes by 9, then round down to the first whole number.
Exceptions are 36 spoked wheels where with 4 across (36/9) you will often get some overlap, like shown in picture 10. And 16 spoked wheels, where you can get away with 2 across (because hub flange holes are at a great angle and distance.

With radially laced wheels, there is some (not naked eye visible) hub twisting, giving a poor copy of cross laced spoke pattern for load bearing. In the picture below, I drew the spoke position, when they are stretched (in the direction depending on the force direction). It is exaggerated in order to demonstrate (and I didn’t re-draw the whole rim as it moves with the spokes).

There’s a lot more twisting and friction, which can break spokes. That is why only front wheels for rim brake bicycles are sometimes laced this way (and non-drive side of some exotic rear wheels).

Another downside of this lacing pattern is that it puts a lot of stress on the hub, with spokes trying to rip it apart. Note in the picture below how cross laced wheel spoke tension practically tries to compress the hub flange material, while radially laced wheel’s spokes are trying to pull it outwards, rip it apart:

4. Why optimal spoke length is important

Ideally, spoke length should be such that the entire length of nipple’s threads is used for carrying the load. Besides, on rims that are not double walled, spokes that are too long will protrude from the nipples and could puncture the tube. I cut a nipple in half to demonstrate this. Marked nipple and spoke thread start and finish, since it’s not clear in every picture.

In order to calculate the optimal spoke length, the following measurements are needed:

I explained the number of crosses in this post, while for other terms I’ll be adding links as I publish relevant articles.

Finally, all the measures should be entered in a spoke length calculator (link is towards the one I mostly use).

Subscribe for the Newsletter, to get the news, information, and marketing offers:

Scroll back to top