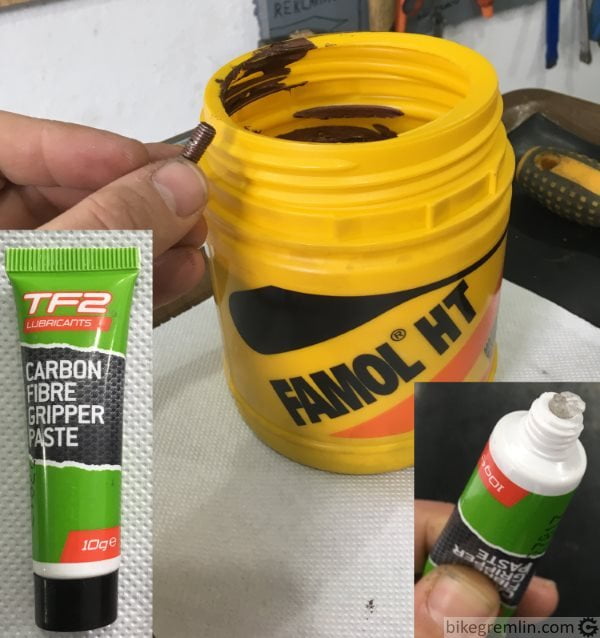 Explanation of a very important part of good quality bicycle maintenance and repairs: mounting and anti-seize pastes. What exactly are they, why are they important, and how are they used/applied? In the remainder of this article, I’ll use the term “mounting paste” to cover all the mounting and anti-seize pastes, noting differences where it’s needed. It is also understood that only good quality pastes are considered – cheap poor quality ones don’t have enough additives to provide good long-term results (I will recommend a few good ones at the end, don’t worry 🙂 ).

1. What are mounting and anti-seize pastes?

Mounting pastes, as the name says, are pastes for mounting elements. They are applied in a thin coating on bolt threads and other parts (seatposts, stems etc.) before mounting them and tightening to an appropriate torque.

One of the more famous mounting pastes is “copper grease”, which you may have seen in a repair shop, or at least heard of it. Another, recently more famous, is “carbon paste” used for carbon bicycle parts assembly (handlebars and seatposts mostly). There are many other mounting pastes besides these: aluminium, nickel, zinz…

2.1. Even and accurate tightening torque

All the materials have more or less surface roughness. With polished metals that is on a microscopic level, but still present and important (both noticeable and measurable). Picture 2 shows that – enlarged and exaggerated:

Tightening torque causes elastic (and to a degree plastic too) deformation (lower part of picture 2 shows deformation due to the force applied pushing two surfaces against each other).

Imagine, under force F pressure, trying to push light-grey material over the dark-grey one, to the right for example. It will go a bit easier, until the “teeth” bite each other. Then it will go a bit harder – until it goes a little bit easier again. This happens in “micro jumps”.

If you are tightening a bolt to say 5.0 N⋅m and the “teeth bite” at 4.4 N⋅m, torque wrench could click at 5.0 N⋅m torque, without the bolt moving at all from the 4.4 N⋅m position. Or, if the “bite” gets loosened at 4.9 N⋅m, you could in fact overdo the bolt due to sudden jerky movement/release of the bolt’s friction. Will talk more about torques in chapter 4.

This is especially critical when mounting sensitive carbon fiber parts and with square taper cranks. Mounting paste acts as a lubricant in these situations, allowing an even tightening torque. Ordinary grease can achieve the same goal, but it doesn’t provide any long term anti-seize properties, explained in chapter 2.2.

Mounting pastes contain a relatively large concentration of “micro flakes” (mostly metal oxides, kaolin – depending on the paste type), meshed with some grease. Grease gets squeezed out over (a few months) time (that is why ordinary grease isn’t good for this application), but the flakes remain.

Flakes are made of soft, non-reactive materials. That way they prevent corrosion and, when dismantling the parts, the flakes get relatively easily smashed/torn (being softer, they practically act as a sort of a lubricant), so the parts are relatively easily dismantled. This is also the reason why, when re-assembling the parts, they should be wiped and a fresh layer of anti-seize applied.

Low-quality mounting pastes (usually cheaper) don’t have enough of these flakes – you are practically paying for an expensive ordinary grease!

Greases can also be used for anti-seize protection, but they can stop being effective even after six months (depending on the conditions and the application).

Carbon fibre bicycle parts, like seatposts, stems, handlebars etc. are very sensitive to over-tightening (worse than aluminium). In order to keep them in place, without sliding, while using as little tightening bolt torque as possible, carbon mounting paste is used. That is achieved by small parts of silica (silicon dioxide) meshed with a gel-like substance for easy application.

Note 1: do not use grease or any non-carbon mounting paste on carbon parts! It will cause the parts to slip, requiring a lot greater clamping force (which will break carbon parts). Also, once applied, the wrong paste/grease will be very difficult to remove completely from carbon parts.

Note 2: do not put carbon assembly paste on the stem to steering column interface of threadless stems (not relevant for quill stems). Rough silica particles can, due to vibrations, find their way to the headset bearings and damage them (as is nicely explained by Mark Killa Barrilleaux in his article and the discussion below). Do put it on the stem to handlebars interface though.

Also referred to as: “assembly paste”, “assembly compound”, “carbon grease” and various combinations of those.

It is usually transparent, with small “grains” that can be felt by hand – like sand mixed with some gel (which it basically is).

Manufacturers usually state that it reduces the force needed to clamp a part in place by at least 30 %. This should not be mixed with bolt tightening torque (more on this in chapter 4). Do tighten the bolts to the torque recommended by the part manufacturer (bicycle parts recommended torque list).

What about combining carbon and metal parts (steel, aluminium or titanium etc.)? Like mounting a carbon seatpost in an aluminium frame (or vice-versa)?

In that case, it is also a good idea to use the carbon mounting paste. It will prevent any slippage with minimum clamping force, hence avoiding any carbon parts either slipping, or cracking from too much clamping pressure.

Avoid using any grease or “ordinary” mounting pastes. They could make the parts start slipping and are very, very difficult to wash off from any carbon fiber parts later on.

3. How are they applied?

Smear it over the parts using a brush, or a cloth (that doesn’t leave fibres). Or by hand.

When applying, it is important to cover all the contact surfaces. Picture 8 shows a literally half done job:

Picture 8 above shows a part with improper mounting paste application – not all the bolt areas that will come in contact with parts when mounting are covered with paste. Picture 9 below shows a very liberally (too liberally) applied mounting paste:

Mounting pastes should not be mixed with greases, or oils, where those are applied. Likewise, they are not a substitution for grease, where grease is needed (bearings for example).

This is important to consider, especially with modern parts: light aluminium, or carbon ones. Manufacturers usually state an optimal tightening torque for parts. Going below, or over that recommendation is not good (without going into details, I’ll just say: too low torque can cause loosening, while too tight can cause plastic deformation).

Recommended torques are usually given for a dry fit (in the cycling industry at least). That is: surface to surface, without any grease, or mounting paste. If it is not noted otherwise on a torque specification, you can assume that it’s meant as a dry fit torque. When bolts for such specification assemblies are prepared with mounting paste, tightening torque should be reduced by about 20%, since bolts will move more easily and going for the full specified torque might result in parts being damaged from too much compression.

Not sure if I’ve explained this correctly, but I’ll give a few examples:

This section is dedicated to some myths (misconceptions) about mounting pastes. I’ll discuss some of the most common.

No. If bolts are tightened to a recommended torque, mounting paste will not cause them to loosen. Having said that: some manufacturers make poorly designed interfaces that rely on thread locking compounds (“glue”) to stay in place. These are exceptions – but these come loose even without mounting paste – “glue” is required.

It is often that with this statement/question, in a pair, comes a story about galvanic corrosion and metal electrode potentials (nobility).
The point is that bicycles take small loads and pressures (compared to cars for example). So it doesn’t take a special mounting paste to handle it – practically any will do.
As for galvanic corrosion: it takes water (electrolyte to be precise)! Mounting paste will, if a bolt is properly torqued, prevent water and air from entering, hence preventing the corrosion.

Ordinary calcium or lithium greases have been used for years, why should we use a lot more expensive mounting pastes now?

I’ve seen a fair share of stuck stems, seatposts and bottom brackets. Anti-seize mounting pastes prevent that problem practically permanently. Greases can do that too, but very relatively temporarily, i.e. grease needs to be re-applied every six months in order to be on the safe side when it comes to galvanic corrosion protection. People aren’t perfect. People forget to overhaul all the parts every six months (or at least once a year). It happens.

The bottom line is: I cycle all year round, including winter when roads are often wet and the water is salty, and am yet to have any problems with plain old copper-based mounting paste (“copper grease”). On the other hand, “ordinary grease” doesn’t do the job of preventing parts from seizing together – not after a few months of winter cycling.

Since bicycles aren’t subjected to extremely high pressures, or temperatures (compared to industrial machines and motor vehicles), most kinds of anti-seize mounting pastes will do fine – as long as they are of good quality. For example, “copper grease” can sustain temperatures of up to 1000 °C, but most bicycle assembly bolts rarely see temps over 100 °C (maybe up to 200 °C for disc brake bolts). The only problem can be a poor quality paste with too little anti-corrosion and anti-seize additives.

With carbon mounting pastes it is similar: they are mostly made and sold as bicycle carbon part assembly pastes. Can’t go wrong with most of them.

Here I’ll list what I’m using and what I can recommend from all the available products. Providing Amazon affiliate links, so I’ll get a commission of any purchase, with the price staying the same for you. Click on an image to shop. Or to see what the product looks like and get it in a local store (auto lubricant stores usually stock these or similar products).

So a recommendation for an anti-seize mounting paste would be Loctite – C5-A:

Personally, I use locally made FAMOL PT paste (titanium oxide and kaolin based). It has white colour, so customers don’t complain about “rusted bolts right after service” as they used to occasionally while I was using copper anti-seize. 🙂 But that paste is hard to get out of Serbia, no worldwide distribution that I know of – unlike Loctite (which is also good).

Note: all the copper-based anti-seize pastes are hard to wipe off and have a characteristic dark colour (including the above recommended Loctite C5-A). On the other hand, FAMOL PT is both white and easy to clean. There are many other white coloured anti-seize pastes, but I haven’t tested how easily they are wiped off, nor how well they prevent corrosion, so can’t recommend any, unfortunately.

I currently use Weldtite TF2 – Carbon Fibre Gripper Paste I got on some promotion. It’s OK. Just bear in mind when ordering that the 10-gram package is surprisingly small. 🙂

12 thoughts on “Mounting and anti-seize pastes”