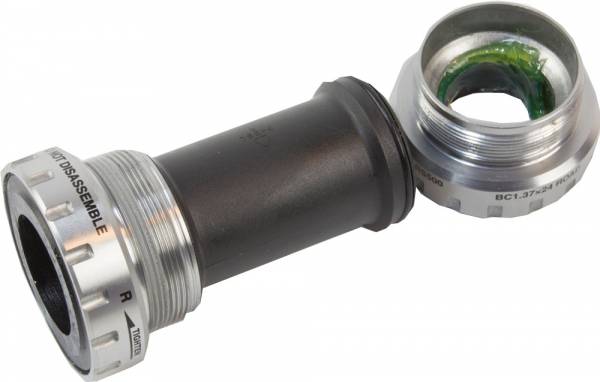 This post will explain bicycle bottom bracket standards. It is the first in the series of posts on the subject, explaining basic terms, then each standard. Most threaded standards are explained, while a separate post explains press-fit (threadless) bottom brackets. The last post will address BB and crankset compatibility and interchangeability.

1. What is a bottom bracket bearing?

Bottom bracket bearing will in the remainder of the text be called “BB”.

Look at the picture below. Bicycle is usually propelled by turning pedals (1), that are attached to cranks (2), attached to a front chainring (3). The front chainring then pulls the chain (5), which is connected to the rear sprocket(s) (6), who then turn the rear wheel. In order for the cranks to spin, they need a rotating bearing and an axle (4). That part, bearing and the axle, are the subject of this post.

First cranksets were simple mechanisms – one crank arm was holding chainrings and was cast in one piece with the axle – then the other crank arm was fixed to it with a rivet. Commonly used old Thompson bottom bracket standard (link to a Wikipedia page):

All that was needed was to fix the bearings to the frame. This was done with a system of cones and cups, holding ball bearings. Preload of the bearings was adjusted with a lockring. For cups to be held in place, BB shell of the frame was threaded, to screw the cups in. There were several standards of BB shell threading.

Some exotic standards that are extremely rare, only on some vintage bicycles were left out.

British standard (also called ISO, BSA, or English) is the overwhelming current standard, most bikes with threaded BBs are made to that one.

The other, still being used is Italian. It’s biggest flaw is right hand side threading on the right hand side cone. The result of this is that right cup needs to be tightened really hard and even some thread locker used to prevent it from unscrewing during riding. Tribute to fine Italian (and French) engineering.  🙂

4. Attaching crank arms to the axle – emergence of cartridge bearings

Ideal crankset should have as little weight as possible, with as stiff axle as possible. Manufacturers first started making separate axles, fixing crank arms to them via a square taper interface. Soon they realized that lower weight along with less need for maintenance can be achieved with making a cartridge BB bracket – as one unit that holds both the axle and the bearings – that is just screwed into frame’s BB shell.

Square taper attachment system is based on preload and elastic deformation of the cranks – axle slightly widens towards the middle, while crank arms have openings that match the axle diameter. Bolts are used to pull the crank arms onto the axle, then they are locked in place by the tight fit with lots of preload. It takes a special crank arm puller tool to pull the cranks off:

There are two standards for the square taper axles (spindles): JIS, and ISO. They differ by the taper (wedge) slope, and by the shape of the edges. JIS is a bit “steeper,” so cranks designed for a JIS axle will slide too high (too deep) on an ISO axle. ISO cranks, on the other hand, will not slide far enough if mounted on a JIS axle.

Further changes of crank-axle interface by Shimano resulted in Octalik 1, then Octalik 2 standard. It made mounting crank arms easy, just sliding them onto splines. Removal is also easier, just unscrew a bolt holding the crank arms and pull them off by hand. That is also the main flaw of this system – bolts tend to loosen because of slight play in the cranks and they can fall off (with damage to the attachment interface). Octalink 2 has deeper splines than Octalink 1, but share the bolt loosening problem.

Also, axle was made thicker, 22 mm spindle diameter, with thinner walls – which made it both stiffer and lighter. Bearing balls diameter had to be smaller, to provide for thicker axle inside the same shell size, but because the cartridge is packed inside the shell, protected from dirt and water, it didn’t make bearings last much shorter than square taper ones. At least the Octalink ones.

Manufacturers who didn’t want to pay for Shimano’s patent joined and made “International Splined Interface Standard”, shortened ISIS (didn’t sound so bad back then 🙂  ).

All these cartridge bearings are usually made for both British and Italian frame shell threading standards.

5. Outbound bearings – return to the right crank arm and axle made in one piece

The wider a tube diameter, the higher strength and stiffness can be achieved with lower weight. However, when it comes to BB axles, frame BB shell was the limit. Diminishing of bearing ball size was exhausted with Octalink and ISIS standards – further size decrease would mean bad rolling and very short bearing lifetime. Shimano rose to the challenge by placing bearings outside, so that cartridges with bearing cups are screwed in from both sides, while bearings are sitting outside the BB shell.

Spindle diameter was raised to 24 mm. Right crank arm held the wider, hollow axle, that went through the BB, onto which the left crank arm was attached. Just like some 30 years ago, only lighter, stiffer… better? That was the birth of the Hollowtech II standard.

Other manufacturers joined in, so there became: Race Face X-type, FSA MegaEXO, and Truvativ/SRAM’s Giga X Pipe (GXP). Campagnolo was the only one to make a two piece axle, with their Campagnolo Ultra Torque standard (requires special tools to mount and remove, and is rather tricky to work on).

Standards with external threaded bearings and hollow axles are still compatible with British and Italian BB shell threading standards (available for both standards). Their biggest advantage turned out to be a flaw as well: bearings mounted on the outside are exposed to water and dirt, so quite soon they develop a characteristic irritating creaking. Bearings can last some time with the creaking, but their lifetime is less than half of what square taper and Octalink ones last.

Later standards were made without threading and with different frame BB shell diameter. These standards are explained in this article:
Threadless, press fit bottom brackets

New standard of a threaded BB is explained in this post:
T47 – a new threaded BB standard