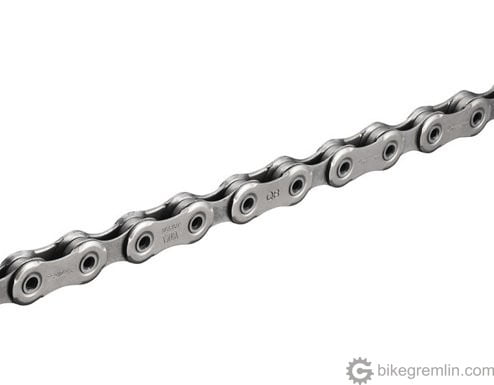 This post will give an overview of bicycle driving chains standard dimensions. Each chain has three important dimensions: pitch, inner width and outer width.

Chain pitch is the distance at which the pins are placed. It is measured by measuring the distance between 3 links, then dividing it by two.

For detailed explanation of chain pitch, and why measuring three pins gives a more accurate result read the post Chain wear (“stretching”). For this post it suffices to say that bicycle chain pitch is exactly 1/2 inch (12.7 mm). This goes for all the bicycle chains, regardless of the speed number.

Inner chain width is the spacing between a pair of inner plates. It is marked in the picture 2.

For inner chain width there are the following standard dimensions:

Chains for one and multiple speeds differ from each other by the outer width. The more “speeds” a chain is designed for, the thinner the outer plates and shorter the pins are (and they protrude less) – so the outer chain width is smaller (i.e. chain is narrower). Inner width of all the multi speed chains is almost the same – with only single speed chains having a significantly larger inner width.

Note how rollers of all the multispeed chains are of almost the same width, only single speed chain being significantly wider on the inside.

Pitch is the same for all the chains – they are aligned by length.

As can be seen from the picture 3, the outer width differs mostly. This is important for bikes with multiple sprockets, so the chain doesn’t get stuck (too wide), or drop between the sprockets (too narrow). Table 1 gives an overview of chain outer dimensions, by number of speeds.

For overview of which chains can be combined with which sprockets, read this post: Bicycle chains compatibility: