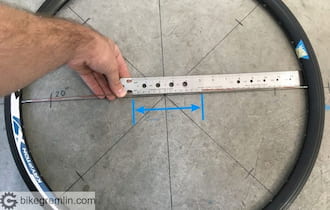 In a different post I explained bicycle wheel building basics. This post deals with only one aspect of those – effective rim diameter (ERD). If you are new to bicycle wheelbuilding, I suggest you first read the afore linked post, then the post about important hub dimensions and how to measure them, only then come back to read this one.

1. What is the effective rim diameter (ERD)?

Effective rim diameter is the maximum distance that spokes need to bridge going from one end of the rim to another (on the opposite side, just like when measuring a circle’s diameter). Deep section double walled rims usually require shorter spokes, since the point where spoke’s nipple is attached to the rim is closer to the rim’s centre – than it is with single walled rims of the same outer diameter.

So all the bicycle rims have two important dimensions (some extra, but more on that in chapter 4):

Pictures 2 and 3, below, show how rim wall depth can affect ERD – two rims of the same BSD are depicted, but the one with the deeper section wall has a smaller ERD – i.e. spokes are attached a bit closer to the wheel’s centre:

2. Why measuring ERD is important

So this post is primarily intended for my personal use/reference – I will be filling it with measurements as time goes by. I will briefly explain the measurement method, then provide a list that can easily be searched.

3. How to measure the effective rim diameter (ERD)?

This is the final goal, and I’ll explain how to get to it:

Take a spoke, then measure and mark a distance along the spoke – starting from the top (where the nipple threads are), measuring a “round” number. I use 20 cm (200 mm) length. For those building small wheels, like 20″ ones, 10 cm is better, 20 cm will be too long for those. You can make two sizes, spokes and nipples aren’t outrageously expensive. Mark the measured length using a pen, or some tape – whichever is convenient for you.

Cut it to a roughly desired length (the part where the spoke’s elbow is will go to the garbage), making sure to err on the longer side. Then use a grinding stone, or a file (which takes more time) and finely get it down to the desired length (to within 1/10 of a millimetre), measuring from time to time in order not to overdo it.

Then screw a nipple onto the spoke, so that the spoke’s end is perfectly aligned with the end of the nipple, in the part where the screwdriver slit is, like shown in the picture 5:

You can put some thread locking glue (like Loctite 243 – Amazon affiliate link) on the threads before screwing the nipple on – I did that, just in case.

After aligning the nipple, pinch it in place so it can’t turn any more, best using some medium sized cutters. Be careful not to overdo it and not to cut it all the way, just make dents that prevent turning. Test by hand if it’s held firmly, then press some more if it still looks flimsy.

If you used thread locker, you could wait another 24 hours for it to cure, but that’s it – you are ready for measuring. 🙂

The procedure is really simple – first place the rim on a flat surface, it will be easier. Then, insert the above described tools into two spoke holes of the rim that are on the opposite sides. Make sure they really are exactly opposite from each other – count the holes between them if needed.

Place the tools so they fit properly, as far as they can go, through the rim holes.

Now that the “measuring tools” have been inserted on the opposite sides, pull them tight towards each other and measure the distance between their ends:

My video explaining and demonstrating the measuring of ERD, hub dimensions, and calculating the optimal spoke lengths:

OK, I’ll admit – I lied to you at the beginning – for strictly pedagogical reasons, so don’t take it too harshly. Rims do have some other dimensions that are also important for calculating optimal spoke length – for building bicycle wheels. It’s nothing complicated and this is finally it, I promise. 🙂

Some rims have spoke holes drilled a bit closer to one side of the rim. They are called “asymmetric rims“.

Rim manufacturers usually note how offset to a side spoke holes are, and that information is usually correct (reliable) – unlike ERD. For now it is important to know that the amount by which the holes are moved to the side decreases the C dimension, while increasing the D dimension (shown in picture 10) – what those are exactly is explained in the post about the important hub dimensions.

Also, it should be noted that we can usually choose how to orient the asymmetric rim – whether the holes are moved to the left (as shown in picture 10), or to the right. For disc brake front wheels, it is better to orient an asymmetric rim so that the holes are more toward the right – in order to have a more equal spoke angle and tension of right and left hand side spokes.

Briefly put: asymmetric rims are used to equal the angles of left and right hand side spokes, with hubs that are not symmetrical (most rear hubs, and front hubs for disc brakes). They should be oriented accordingly.

Some rims have adjacent spoke holes placed a bit to the left and right – alternately. Shown in picture 11:

If this width is smaller than 2 mm, it can be disregarded when calculating spoke lengths (especially if it is only 1 mm).

Some frames have rear wheel dropouts a bit offset. That is: the right hand side dropout is moved a bit further to the right, so it is further from the bicycle’s centre-line, compared to the left hand side dropout. How does this affect spoke lengths? Picture 12 shows it:

Pale hub silhouette in picture 12 shows how hub would be positioned if the frame were not offset. The amount of frame’s offset is information that frame manufacturers usually give correctly. As far as we are concerned: C is decreased by the amount of frame offset (because the left hub flange is practically moved toward right by that amount), while D is increased for the same amount.

Caveat: be careful if using asymmetric rims with offset frames. Because, if you orient the rim incorrectly, you could make the angle of spokes from one side almost vertical – instead of making it more equal to the opposite side spokes angle. For example: rim from picture 10, if used with the frame from picture 12, would be oriented so that spoke holes are more to the right. If done otherwise, left hand side spokes would end up going almost straight up, while the right hand side spokes would be at a sharper angle.

I hope the procedure is clearly explained. The goal was to explain exactly how and why various rim types affect spoke length – so you can understand the basics and adapt to whichever rim-frame combination you run into. This spoke calculator takes all the above noted dimensions into account, so you don’t have to think about it too much (but this article was written so you can understand the basics, and not depend on any particular tool):
https://www.wheelpro.co.uk/spokecalc/

NOTE/UPDATE 2022: See Christophe’s comment and the following reply below for some more info regarding this spoke length calculator.

I would also recommend buying an excellent book that explains all this even better:
Professional Guide to Wheel Building, by Roger Musson (not an affiliate link – I don’t get a penny from the sales).

For those who are more of a “show me” type (and don’t mind tedious explanations in Tarzan English), I have also made a video:

In a separate post I list ERDs of various rims as I measure them – Effective Rim Diameter (ERD) datasheet.