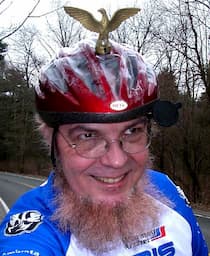 One weekend, I was helping an old friend with some water pipe digging. As we were chatting, bicycles came to mind, of course, and I mentioned Sheldon Brown and his website. For who knows which time – as the friend had noticed. We both concluded it would be worth to write about Sheldon Brown’s legacy – his influence on cycling and bicycle mechanics. Humans live relatively shortly, most are quickly forgotten, but some are exceptional – and he is among those. So here it is, a “homage” to the late legend, as best as I can put it into words:

When I was getting into bicycle mechanics – that is, figuring out how to fix “modern multi-speed bikes with dreailleurs” on my own, one of the best resources I could find was given for free, on line, on a website called “Sheldon Brown’s Bicycle Technical Info” – popular among the cyclists under the name “Sheldonbrown” (www.sheldonbrown.com).

It’s turned out and proven to be an inexhaustible source of information and knowledge. What’s even more important, the information provided there has been tried and tested – in other words: correct. Which (information reliability and trustworthiness) is a great problem with Internet nowadays.

I was amazed to learn that the man had given information and actively participated in rec.bicycles.tech newsgroup (for the younger readers – newsgroups were the fathers of forums, and grandfathers of social networks), and on bikeforums.net forum (Sheldon Brown’s profile on bikeforums.net). Unfortunately, I was late to arrive to bikeforums.net while the late Sheldon Brown was still alive and active there. But, over the years, I have grown to understand, appreciate and witness his legacy. Seeing how Sheldon (then already a living legend) was actively helping fellow cyclists, engaged and active within the community, is an exceptional example of selfless commitment to knowledge and cycling. As his bikeforums.net profile says: “Gone, but not forgotten”.

Sheldon wrote on his website on how he would like people to see him, which is exactly how I saw, and still see his work, long after he’s been gone:

In my city (Novi Sad, Serbia), many cyclists and mechanics were helped and inspired by the info provided by “Šeldon Braun”. I could write pages about why I love his website, but to put it briefly: it provides novice friendly information, easy to follow, with hyperlinks for most terms used, so they can easily be looked up in case one is not familiar with a term. The website is very nicely structured. Probably for “retro-grouch” reasons, I love the fact it’s an “old school” pure HTML site – fast, secure, simple.

While providing valuable contribution to the community, he wasn’t shy of receiving information back and passing it on. Some of his pages are filled with community provided information (measurements, experience etc.). Also hosting articles written by other experts in the field, even when they openly disagreed with his views (notably Jobst Brandt) – which shows his aim towards objectivity, and greater knowledge, instead of vanity.

About 6 years ago, I was talking with a good, experienced local mechanic, who’s very much into mountain biking and bicycles with suspension and hydraulic disc brakes. As I mentioned Sheldon Brown’s website, he replied (quoting from memory): “it’s good, but a bit outdated”. That struck a chord. Fortunately, the website is still maintained by his widow Harriet Fell, his old friend John S. Allen, and the bike shop he worked at – Harris Cyclery. With articles still updated and added. It definitely should be maintained and preserved, as it is what I’d consider to be a treasure of human knowledge – at everyone’s fingertips, thanks to many years of hard work to write and publish all the information.

So the legend still lives on, helping countless cyclists and mechanics even today. There is no cycling related group, or forum, that doesn’t mention the name, or link to a Sheldon Brown website page explaining a certain topic/problem.

My cycling website – BikeGremlin, was greatly inspired by Sheldon Brown’s site. Attempting to make it in a similar, encyclopedic structure (suppose that in about 20 years time, we’ll know if that’s been successful).
There are other websites made in a similar way. Don’t know if the authors have been inspired by the same “spirit”, but it certainly appears so. Here are a few that I found good and useful:

Those are a few that obviously seem to share a rather similar approach and philosophy. Though I’m sure most avid cyclists and bicycle mechanics have been influenced by Sheldon Brown’s work in one way, or another. If anyone asked about a person who’s been most influential when it comes to cycling, I wouldn’t name any famous racer, wheel, component, or frame builder – in spite of all due respect for the other greats, the reply would be the humble, hard working cyclist and mechanic, eager to share their knowledge and help others.

In spite of the popularity of modern social networks, filled with pictures of cats, and full plates, which mostly seem to serve business and vanity, the beauty of Internet is still sharing ideas and providing the entire knowledge of the human race at ones fingertips. Sheldon’s legacy is a part of that – great, shared knowledge. Which makes the world a better place and brings people together, better than a picnic picture shared on Facebook/Instagram. It is a great example and a source of inspiration for future generations of cyclists, mechanics, their spouses, friends and children.

At the cost of sounding too melodramatic, this article is my thanks and homage to the late legend, that still lives on.