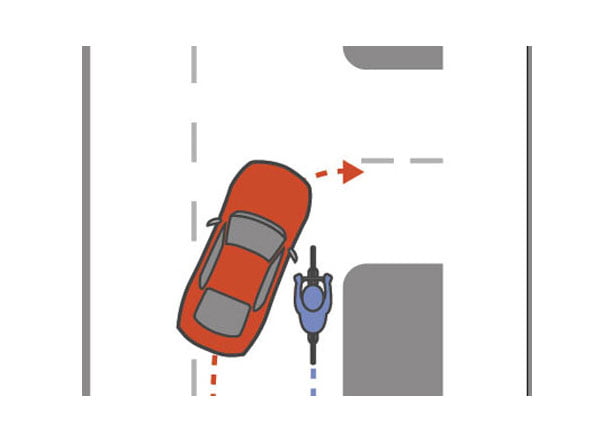 This post will explain some typical risky traffic situations for cyclists in traffic and how to avoid them, how to stay safe when cycling on public roads, with other motor vehicles. Each risky situation will be explained separately, with advice how to minimize the risk of an accident.

If you’re riding near parked/stopped vehicles, there’s a chance someone will open a door to get out.

Solution is simple: stay away from the door zone.

Special scenario is filtering between vehicles. For this to be safe, all the following conditions need to be satisfied:

Classic situation: a bicycle goes straight, a car turns right over it.

How to avoid it? When approaching a junction (or a parking lot) where cars can turn right, check over the shoulder if a car is overtaking you at the moment. Be ready to brake if they start turning right. Safer style is to check for oncoming traffic at a larger distance before a junction and, when it is safe, move towards the middle of the lane. Such lane positioning makes drivers much less likely to try the risky right hook manoeuvre, and if they do, there’s more room for “running away” and braking.

Scenario one, no cars approaching:

Second scenario. Vehicle approaching. This is why it’s important to look ahead and change lane position in time.

Here is a classic right hook scenario, when the cyclist doesn’t change their lane position in time:

If there’s a bicycle lane on the right side of the road, pay attention to cars slowing down – they are likely to turn right, or try to park. Stay behind them and be prepared to stop if they turn in front of you and pull over, or turn. Even if they’re signalling a left turn signal, they might turn slightly to the right, before making a u-turn – many drivers do that.

The same goes for roundabouts:

When a bicycle is hidden behind a car in front, there’s a higher chance a car coming from the other way, turning left, will turn at the cyclist.

Even when not hidden by a vehicle, a bicycle can be hardly visible by a low sun shining behind it, or by staying in the right most part of the lane, where a driver coming from the opposite direction isn’t expecting vehicles to appear (most drivers look for other cars in the middle of the lane).

Way to avoid this is by proper lane positioning, or allowing for more distance behind a vehicle in front. If there are no vehicles, swerving from right to left within one’s lane is a good way to draw attention of other drivers approaching an intersection.

d) Not giving right of way

Situation when other vehicles don’t give a bicycle the right of way. Usually happens because of too little lateral movement. Simple way to avoid this:

Phenomenon of cyclist visibility and lateral movement is explaine in this post: Sorry, I didn’t see you.

A car starts to overtake a cyclist. It turns out there’s not enough room for a safe overtake. When a driver must choose between a collision with an oncoming vehicle and the bicycle they are overtaking, they often choose the latter.

How to avoid this? If there’s not enough room for a safe overtake, either move off the road, or take the lane – making vehicles behind wait for a better time to overtake you.

Lane must be taken in time. One mustn’t just “jump” in front of an approaching vehicle. Check first over the shoulder, make sure the driver behind has enough time to notice your change of lane position and slow down. Only when it is safe, in time, make a move to change the lane position and “take the lane”.

The greater the speed difference between a bicycle and oncoming cars, the more cautiously and earlier this manoeuvre needs to be taken. If, for example, a road is used often by heavy lorries that need more time to slow down and there’s a bend behind you, making it impossible for the lorry driver to spot you in time, and the vehicles go fast on that part of the road, this manoeuvre can be dangerous. So use taking the lane cautiously and with good judgement. It’s not always the safest option, although it most often is.

If a bicycle is stopped first at a traffic light, the cyclist is sure to learn the definition of a millisecond: the time that passes from the traffic light turning green, to the first car horn. 🙂 Best way to avoid this is to let one car be in front. Stay second, behind a leading car. If there are no cars at a red light, stay some 10 meters behind the junction, to the right, letting the first car coming to the red light to stay in front.

Staying behind the first car has several benefits:

A bit vague, general term. What does it mean? When riding always plan some 15 seconds ahead: is a traffic light red, has it just turned green, is there a jam in a traffic lane etc. Plan speed and lane positioning according to what you’re anticipating. Always try to “read” other riders, drivers, pedestrians.

A good, safe driver is the one that can compensate for other driver’s mistakes. Some general tips:

Like rain: uncomfortable, but often present. Pedestrians tend to jump suddenly in front. If there’s a pedestrian near, always be prepared to brake, or avoid. Check over the shoulder for oncoming cars. If there are some, then the only manoeuvre left is braking. Many have earphones and aren’t looking, so there’s no use relying on them to be careful. Try reading their intentions, make sure to spot them in time and have a backup plan in case they just move into your path.

If you are surprised by a pedestrian you didn’t see in time, “jumping” in front of you, and there’s no time to stop, the only option is avoidance. That is why it is important to check for oncomming traffic behind regularly. So you know whether it is safe to swerve, and in which direction. If a pedestrian that has jumped in front of you sees you at the last second, you can expect that most men will jump forward, while women will stop, or make a step back. Most often. Of course, if your instinct tells you otherwise, listen to it.

i) “Scanning” the surroundings

The last, but not the least important – when riding, always scan the entire surroundings. Never focusing on one particular danger for long. For example, keeping focus on a car to the left can cause one to not notice another car approaching from the right at the same time. With a tic-tac principle – quickly switch focus from one to the other danger, always observing the entire surroundings. From close, to further, than back.

Once a rider gets tired, one of the first things that give is the focus change speed – eyes remain fixed to a certain objects for longer, which increases the risk of overlooking a danger. That is why conscious effort should be made to keep actively scanning the surroundings all the time, without keeping focus for too long on one object.