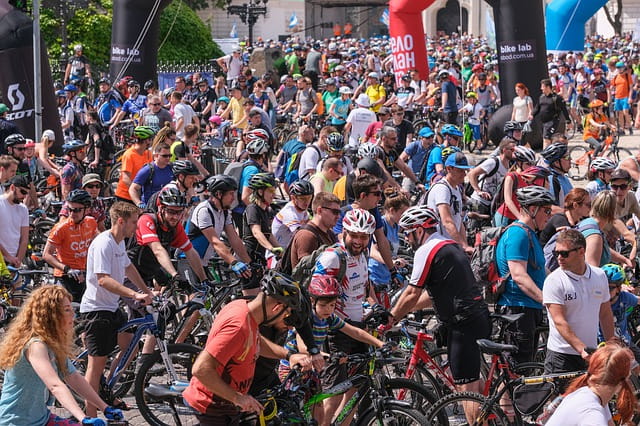 This post explains what kinds (types) of bicycles exist and which is the best choice for which use. There are many “sub-types”, so this is just a short explanation of major distinctions and characteristics of each type.

A query that can be answered in order to get a recommendation of bicycle type most suitable for one’s needs and ways of using bicycle: Which type of bicycle suits my needs.

Bicycle types per intended use

According to the way a bicycle is to be used, one can choose the most suitable type of bicycle. Here is a list of basic types, with explanation.

A) Road, Gravel and Cyclocross bicycles

Bicycle good for sport and recreational riding on (well) paved roads. Sitting position is such that it asks for sports clothes and fast riding. It is not suitable for carrying load.

A special kind of road bike is a Cyclocross bike. It is a blend of MTB and a road bike. Sturdier frame, room for wider tyres, cantilever, V-brake, or even disc brake compatible. Good for those who need a road bike that can be ridden off-road aggressively.

The latest craze (at the time of writing) is Gravel bicycles. What are these? Gravel bikes are basically more comfortable and less aggressive geometry cyclocross bikes. They are designed for long rides on bumpy terrain (“off-road” riding). Unless you ride really aggressively off-road, these bikes are among the best choices and are definitely among the most versatile bikes.

Gravel bikes can also be described as super-fast MTB-s (but they can’t really “fly” over rocks), or as slow road bikes (but still “faster” than most other bicycle types).

MTB is well suited for off road riding, steep climbs, technical courses. Strong frame, wide tyres. They usually come with lots of gears, with gearing short enough for steep mountain off road climbs. They come in a variety of designs:

These are the most versatile bicycles. They can go in mud and gravel. They can take mudguards and rack and be used as a city/commuting/grocery hauling tool, they can take lots of weight so are good for touring as well. Because of slightly smaller wheels (559 vs 622 mm), they fit easily into elevators, small places.

Somewhere between a road bike and an MTB. It usually has 622 mm wheels (28″) with tyres a bit wider than a road bike, and narrower than an MTB. There are two sub-groups in this category:

Usually has room for mounting mudguards and rack mounting screw holes drilled in the frame. Gearing is usually somewhere between an MTB and a road bike.

Full chainguard and sitting position make riding in a suit, or a dress, easier.

A sub category of a city bicycle. Used mainly for commuting, by people who travel via some other means of transport (train, or a car). Bicycle is easily packed to be carried. When it is needed, it is easily reassembled. It has small wheels, so it takes less space, but the saddle and handlebars can be extended so that it can be ridden by an adult.

They usually have larger rear triangle. Rear wheel is further from the bottom bracket. This makes weight distribution more even, and allows for large panniers and lots of cargo to be carried.

Gearing is with a lower ratio, so that it allows climbing hills with a heavily loaded bicycle. Frame is usually made of steel, made stronger so it can take heavy loads and abuse.

Here’s a picture right away:  🙂

Because of the seating position, these bicycles provide less air drag, so are faster on flat road. However, they are worst at: cornering at very low and very high speeds, climbing hills, riding on bad pavement / off road, going through dense traffic. Just like with digital watches: there are people who believe it is recumbent a good idea.  🙂

Usually with an electric motor that can drive bicycle, or give aid when pedalling (up hill for example).

Good for the elderly, or people who commute to work and don’t want to arrive all sweaty. Frame design is usually like of a city bicycle. They are quite heavy because of the motor and batteries.

Type where two or more people ride one bicycle. Good for partners, or families. It usually consists of one long frame with one steering handlebar, but several saddles and pairs of pedals.

This kind of bicycle is good if one rider is much stronger/weaker than the other. It enables rather fast riding, combining strengths of both riders, with minimal air drag.

For each use, there is an appropriate model. If in doubt, one can’t go wrong with a rigid MTB for a start, for gaining riding experience and figuring out what the ideal choice is.

Important type – kids bicycles, will be explained in detail in a separate post.

4 thoughts on “Types of bicycles”