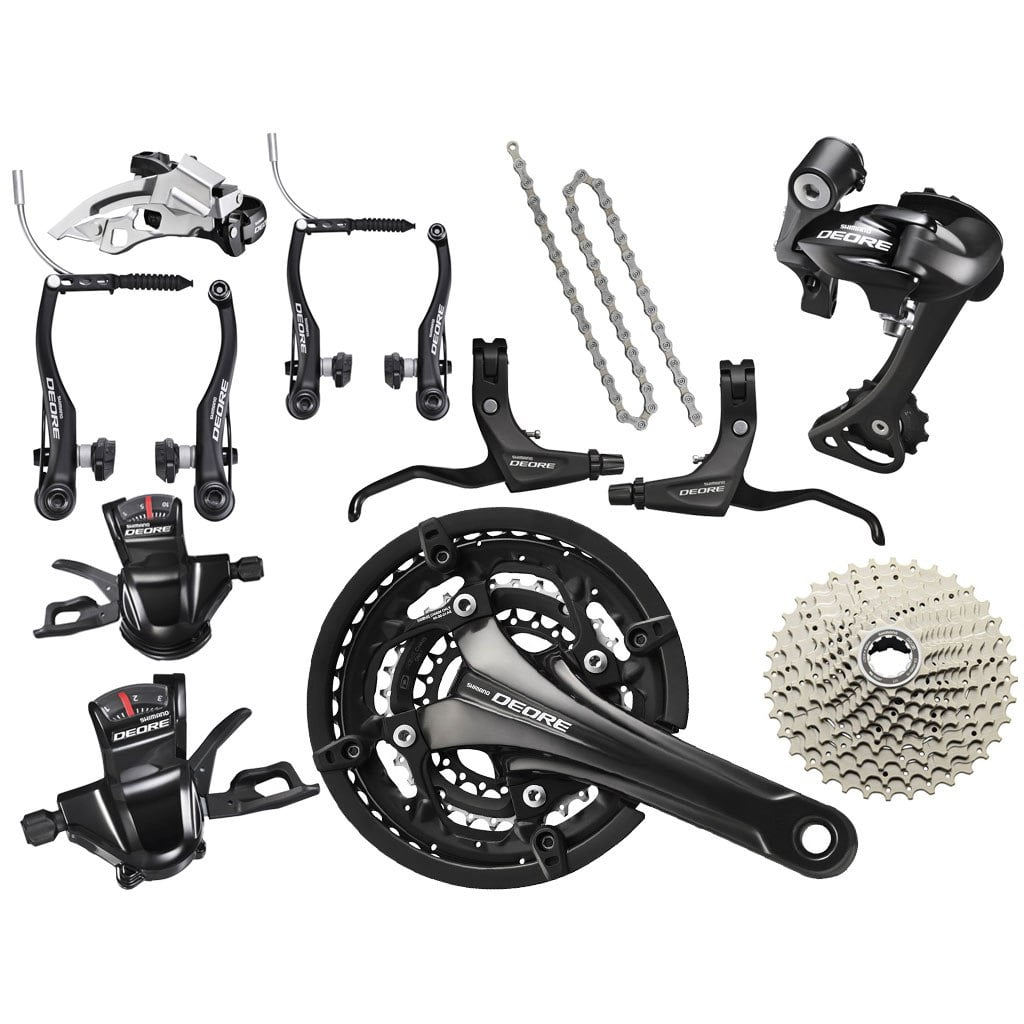 “What groupset do you ride?” is a common question among experienced cyclists. Less experienced ones often ask what bicycle groupset classes are the best, which one to buy. This post will give a ranking (list) of classes from the low, to top class, for the three major groupset manufacturers: Shimano, SRAM and Campagnolo.

1. What are equipment (“gropuset”) classes?

In order to answer this question, it is first important to explain what equipment is and what a groupset is. That is explained in this post: Groupset.

2. What classes are there?

As it is shown in the picture above, the lowest class of Campagnolo is Xenon, then comes Veloce, Athena… up to Super Record as their top class of equipment. The same goes for other manufacturers.

By this table, the current gravel groupset, Shimano GRX, falls somewhere near Tiagra/Deore, or a class higher, depending on the series and the number of speeds.

To be more precise:
GRX400 series is in that range, while GRX600 is a class above, and GRX800 is two classes above (so an equivalent of Ultegra/Deore XT).

There is a whole groupset made for each equipment class, everything: brakes, derailleurs, cranks, cassettes etc, except for the lowest two or three classes  – they sometimes don’t have all the parts made in the same class. For example, Shimano road equipment class Claris uses Sora 8 speed cassettes, since specifically “Claris” class cassettes are not produced.

Classes bolded in the picture are the same level, for comparison. That is: Shimano Tiagra is about the same quality, price, and features included as SRAM Rival class. In MTB equipment, that would be similar to bolded Deore, or X5.

Also, the same class equipment by various manufacturers is put in the same row. For road and MTB separately. So Shimano DXR would be somewhere between SRAM X9 and X0.

3. Which class is the optimal choice?

Best bang for the buck is the lower middle class – the classes written with bold font in the picture. Durable, sturdy, not too heavy and not too expensive. Up to two classes below that, the equipment is still of decent quality, not requiring often changing or fixing.

Classes above are slightly lighter, arguably longer-lasting (depending on the type of equipment, whether it’s a hub, or a shifter etc). Still, prices go rapidly up with every higher level of equipment, for minimal gain. Top-class equipment makes sense if you’re a pro and a sponsor pays for the equipment.

There is another important factor: modern equipment of high class is made for a large number of “speeds”. Equipment that is made for 8 or less sprockets at the rear is generally a lot more durable, resistant to dirt, bad weather etc. For example, Shimano Claris groupset with 2×8 speeds will shift better than a 105 groupset with 2×10 speeds, while the newest 11-speed 105 does shift better, but requires a perfectly straight derailleur hanger, and high-quality cables and housing. It will weigh up to a kg more, but that is for the whole groupset (crankset, shifters, derailleurs, STI levers etc.).

We live in an era of capitalism. The way to make money is to produce cheap things that break down quickly, or to sell long lasting quality products for very large sums of money. Trend in modern bicycle equipment is to make expensive, high class equipment not much longer lasting, just with some extra features – features of questionable benefit to the buyer, but those that sound good when advertised.

One of the major frauds is adding more and more “speeds”. This problem is explained in this article: How many speeds? For example, today it is impossible to buy new shifters in say Shimano Deore class for 3×8 speeds. They are produced only for 2 or 3 x 10 speeds. In order to get the (more) reliable 8 speed system, one can only buy low class Altus, or Tourney equipment. It is the same with other manufacturers.

Having said this, 8 speed Tourney might still shift almost as good as a 10 speed Deore – for reasons explained in How many speeds post.

If low budget and rare visits to bicycle shops are a priority:

If smooth functioning is the priority: the same as above.  🙂

If the priority is light weight, new stuff, or competition: as expensive as one can afford. It is difficult to point out one part of equipment that influences overall performance the most, so it is best to get a whole groupset of the same class – the most expensive one can afford.

For help in combining different equipment classes and manufacturers, some help can be found in the series of posts on compatibility: Compatibility.