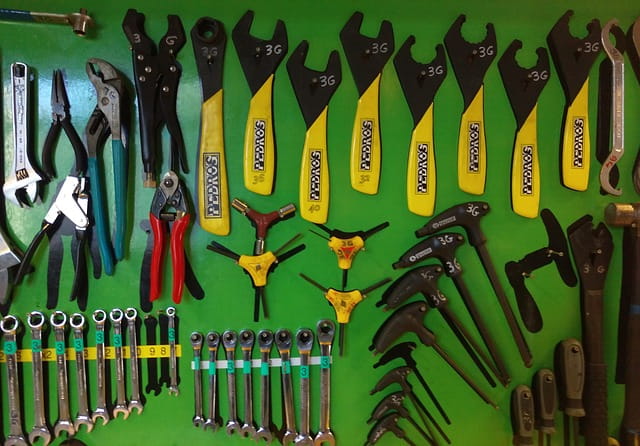 Should I get into the business of bicycle mechanics? While only you can answer that by and for yourself, here are my thoughts and experience (being at home with a flue, with nothing better to do, apparently 🙂 ).

I read a post on bikeforums.net, from a poster wanting to get into bicycle mechanics as a career. Read the discussion some 5 days after the original post. Some very good, interesting points. Some food for thought. Started typing a reply, but it got a bit long(winded) – as much of my writing often gets. Anyway, thought it would be more humane to leave it all on bikegremlin – at least people come warned and prepared here… well, mostly. 🙂

A short version of the answer:

TL/DR: how much are you (and most people you know) prepared to pay for bike service? That’s how much you can expect to charge. How fast can you work? With all the taxes, health insurance and savings deducted, can you make a decent living on those incomes with 170 hours per month on the job?

Loooong one is in the remainder of this post. NOTE: This is more along the lines of thinking out loud. Also, my experience comes from Europe – most from working in the poor (robbed and wrecked) country of Serbia (a part of the former Yugoslavia).

I have a few decades of IT-related work experience – love both computers and working with people, so a sys. admin. job with tech. support on call seems like a fine one.

Always loved figuring out how stuff works, dismantling appliances and machines – from early childhood. Pretty good at putting them back together – most of the time. Plus I love “the outdoors”: sports, hiking and cycling – LOVE cycling. Fixing flats and tuning things has never been a problem. For “bigger” jobs? Being a perfectionist (no, this is NOT a good thing, most of the time) I wasn’t happy with bike shop service so started doing everything on my own, getting the tools in the process.

Living in Novi Sad (you could call it “Serbian Amsterdam” as far as terrain and cycling culture are concerned) – in time, bikes of other people started coming in. After some years, I had decided to get a garage and start a small bicycle shop. No advertising, not even a label on the garage door. Word of mouth. People come in, ask politely if I can help them with their bike and I decide whether I’ll do it. I make sure to do a top-class job® with each bike. Doing it that way takes a bit more time than “just getting it done” (an example: measuring and “evening” spoke tension when finishing a wheel – most bike shops don’t even have a tension meter in my city). So, in spite of being the most expensive in the city by far, and getting all the insurance/pension from my “daytime IT job”, I still find it hard to make enough by the hour to say: “this job will allow for nice living”.

Another aspect, equally important, related to that – and I understand it’s similar in the EU and the US:
I’ve worked with many shops, owners and mechanics over the years. The ones I like working with and would let them work on my bike usually fall into one of the following categories:

Bicycle mechanics is about making the customers happy. It’s not about fixing bikes! The faster you accept that, the easier/better. Some people like it to be cheap, some to be expensive, while some just need some time and/or advice. Most of the job is about figuring out what you’re really dealing with. Get it right and people will leave your shop happy, making you happy – it’s a sort of a “reverse-loop” process: people smile, you smile back, they smile even more, to put it bluntly and over-simplify. Works the same for the bad stuff.

This all might seem a bit like acting/cheating to those who don’t fully understand it. But it is not, or at least it doesn’t have to be. In my example: refusing to do sub-par quality service, when I see a customer that is looking for that, I am happy to recommend another shop, close by, that will do a very good job compared to the low prices they charge. Doing anything else will leave either the customer unhappy or me unhappy for knowing I’ve done a less than a top-class job®. Sometimes, when I see the customer is troubled and another shop won’t work for them (kids, elderly, disabled etc.), I “eat defecation” (as I call it) and do the job for half the price – but that’s an exception, the “compensation” part coming from knowing I did what I believe was the right thing.

The same goes for shops doing enormous amounts of repairs at a “decent quality level”. If you see an OCD customer (like myself 🙂 ), that won’t be happy with that kind of job – by all means, either do a bit extra work (charging accordingly) or send them to someone who will.

One unhappy customer can’t be compensated by another thousand happy ones. It ends up badly, in the long run: both for the customer and for the shop. Again: the bicycle shop business, like most customer service businesses, is about making the customer happy. You can do it on your own terms, without making compromises (if you don’t want to, with all the consequences of that choice), but do it. And it is a two-way street: customers are doing you a service by bringing in both the work and the money, while you are doing them a service by making them happy (or sending them to someone who will). It is fairly simple, but I’ve seen countless shops and mechanics get that wrong.

If you do this job properly and honestly, you will be working for a minimum wage. I like to say: a way to get to a million dollars in the bicycle industry is to start with two millions. It is what it is. There are benefits of this line of work, but big bucks (or even decent pay) aren’t one of them. Not in my opinion and experience. In a separate post, I wrote about whether bicycle service prices are high, or low?

Don’t get me wrong: I take great pride in being a mechanic. The guy people approach with the words: “maestro” (Serbian colloquial name for a mechanic is a synonym for that word). Doing “the magic” of putting things together, making them work, fixing things that didn’t work. However: if you don’t charge for things that you don’t (really) do, if you don’t skimp on parts etc, it is a relatively poorly paid job. Wish it weren’t, but it is.

As always, leave any comments below. All are held for moderation for spam and troll reasons, but will get approved/published unless there’s a very good reason not to, as explained in the posting rules.