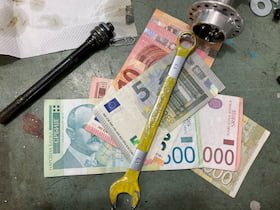 As a practical, real life example, I’ll take a front derailleur tuning I did a few days ago. A man came with a problem – said his front shifter (friction one) is moving with great difficulty when shifting to the largest chainring, and it tends to move back on its own when riding. And I fixed it – “front derailleur tuning”. What did that mean, what work was actually done?

If anyone would ask what was done? “He tuned my front derailleur”.
Depending on the person, this might be followed by: “How much do they charge for that? It’s a 5 minute job, there’s a tutorial on YouTube…”

Of course, bicycle mechanics isn’t rocket science – most people can service their bicycles themselves if they devote enough time and effort… and get the right tools. This website, and BikeGremlin YouTube channel are devoted to that. Yet, if someone else does it for you, it’s normal for them to charge for their time.

In addition to the time spent, shops also need to cover all the rents, taxes, insurances, and with new technology, tools are getting more and more “exotic” (non-standard) and expensive, especially for the “newer stuff”.

Finally, in my experience, most prices are calculated with average time taken into the account. Some jobs get done surprisingly quickly, while a stuck bolt can make a routine 5 minute task into a hour long chore, with no way to reasonably charge for it. I think that most mechanics would be happy to charge an agreed upon rate by the hour, no matter how short, or long the work takes. But that would be unjust towards the customers, since they would have no idea how much it would cost in the end.

The point of this story is that bicycle mechanics job is not among the highly paid ones. Regardless of how much a repair costs, a mechanic most probably doesn’t charge (earn) more than you do per hour of work. The main difference between the good and the bad mechanics is whether they do the work properly, or it has to be done again. That at least is my opinion and experience.

For those interested, in a separate post I wrote in a bit more detail about the job of a bicycle mechanic.