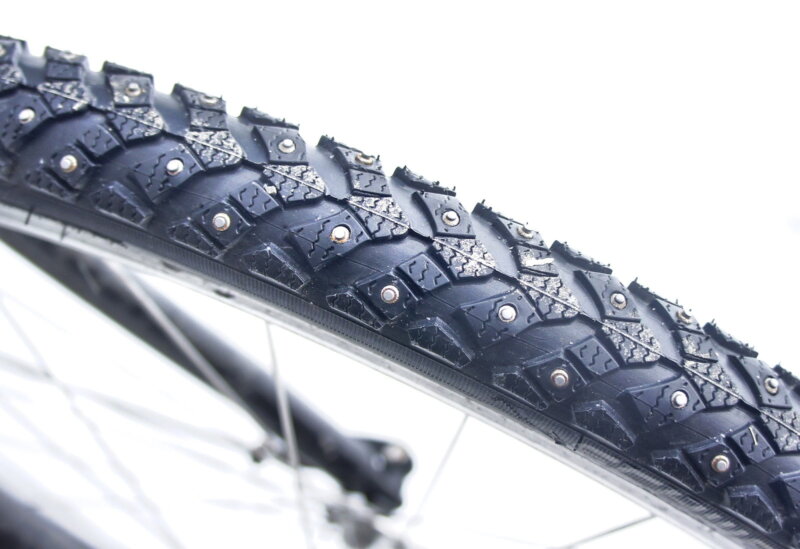 Cycling in the winter, even on snow and ice can be nice. 🙂  Having good bicycle winter tyres helps a lot with that. This post will first explain the basics of tyre traction. Then the types of snow and winter surfaces usually encountered. Afterwards it will explain studded bicycle tyres and their attributes. Finally, it will help you choose the right type of bicycle winter tyres for your riding conditions. Let’s start.

Post explaining how to change bicycle tyres: Mounting bicycle tube and tyre
Clothes: How to dress for winter cycling
Snow and ice riding technique: Cycling in the snow

1. Tyre traction on the road surface

Tyre traction on the surface depends on how sticky the rubber compound is for surfaces that the tyre can’t dig into. That is why for paved roads, whether they are dry or wet, the best tread profile is slick, bald, without any grooves. If a tyre leaves impression on the ground, that means it can dig into the surface and that is when the tread pattern comes into play.

There are three basic types: soft snow, slush and ice. Explanation of each “type” will be given, before recommending tyres for each (some tyres are more universal, but each have their strong and weak points – can’t have it all).

By this term it is meant the soft or lightly trodden snow, of various depths.

For snow that is soft, tyres with deep tread pattern, knobby tyres, offer the best grip and traction.

Slush – watery snow, usually in the streets that are ploughed, with, or without a very thin layer of fresh snow – a few centimetres or so.

For slush and shallow snow, narrow tyres that can easily cut to the pavement are the best choice. Moderate grooves can help tyre reach the pavement and get a grip.

Ice – whether of highly compressed, trodden snow, or frozen water.
For ice, when it comes to rubber tyres, the best choice is bald, slick profile, since the ice is hard and tyre cannot dig into it – so it behaves like slippery concrete. That is where studs come into play.

As can be seen in the pictures above, the studs are with a flat, cut off tip. The quailty ones have a carbide core. These studs are the only good ones because they don’t get damaged from riding on pavement. One will often cross parts where the snow is melted and there’s bare pavement underneath.

In addition, studs are usually not placed in the middle of the tyre. This enables rider to just inflate the tyre and have the studs barely touching the concrete, in case the snow melts and there’s a long stretch of bare pavement.

When riding in ice and snow, it is always recommended to lower the pressure a bit, make tyres a bit softer. Tyres will then bend more in contact with the ground and studded tyres will have the studs come in solid contact with snow and ice.

In the snow, studs have no effect whatsoever. They neither help, nor reduce traction.

On ice, studs dig in and allow good traction.

The physics are simple: studs are very hard, with relatively small tip. This means the weight of both rider and bicycle is put over about 10 small dots (whatever number of studs come in contact at one time). So relatively high pressure is made in the place where a stud contacts the ice. With increased pressure, water turns to fluid from sollid state, so studs do micro-melting of ice, just enough to dig in, with the surrounding ice staying firm, enabling a good grip. The same principle that ice skates use.  🙂

In practice, riding on ice with studded tyres gives a feel of riding on dry pavement with ordinary tyres. One can even feel safer riding than walking.

On one occasion, after a 30 minute ride on ice with studded tyres, I almost fell when I stopped and started to dismount – I had completely forgotten that it was icy and slippery, so when I put my feet down…  🙂

On pavement, studs reduce traction. They can not dig into concrete, and metal is more slippery than rubber. That is why studded tyres are made without studs in the middle part of the tyre. When riding with studded tyres on pavement, one should be gentle when cornering since the studs are mostly at the sides, so no hard cornering or leaning the bike a lot. Normal, relaxed riding and cornering will work like regular rubber tyres on pavement.

Avoid hard accelerating and hard braking (if possible). This is not (only) due to poor traction, but to avoid studs being torn out of the tyre. There are replacement studs available, rather cheap, but why waste them? They can take hard riding on snow and ice, but not on pavement.

In practice, studded tyres will work just fine on pavement, with a slightly less aggressive riding style. Just some common sense and caution and riding will be just fine.

4. Which winter tyres to choose?

Disclaimer: Links for on-line shopping of recommended tyres in this chapter are Amazon affiliate links. As an Amazon Associate I earn from qualifying purchases.

There are practically four combinations of different surfaces and I’ll recommend a tyre for each. Links on tyre models lead to a search for on-line shopping at Amazon.com.

Tyres in the picture are the ones I use in my city. The model I’d recommend are Schwalbe Marathon Winter – in size that fits your rims and width as narrow as you can find.

Any tyre with aggressive tread pattern will be good. Big room between knobs allows the tyre to clean itself of snow and mud and always grip well. Author’s recommendation are Continental Race King tyres, in width and diameter that suits the rims on the bike (26, 27.5, or 28-29″ wheels).

Tyre with fine tread pattern will be fine. Tyres with compound made for winter (“softer” rubber) will be better. Tyres like the one in the picture above will grip on ice as well as any non-studded tyre can be expected to grip on ice. Far from “great”, but better than most other slick, or (especially) knobby tyres.