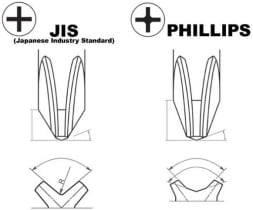 In this post I’ll explain how to find a cross-head (Phillips) screwdriver that doesn’t slip out when trying to unscrew a tight screw. Will do that first, briefly. Then comes some history, and standards explanation (including JIS), in an attempt to provide a more universal way of recognizing the good, well fitting screwdrivers – and clarify what it’s all about. Alas, if you’ve ever fixed bicycles, motorcycles, or any appliance with cross-head screws, you know how frustrating it gets when your screwdriver just keeps slipping out, especially when you are trying to loosen a stuck screw. It doesn’t have to be like that. Let’s dive into this problem.

The goal of this article (and my research for it) was to help myself find a screwdriver that fits well and doesn’t cam-out. In other words: how can I tell, before trying (and buying), if a screwdriver will work properly with bicycle, motorcycle and other cross head screws?

Those who wish to know how I chose this screwdriver can read the next chapters, but for those who just wish to know which screwdriver has worked very well for me, on both the American Phillips, and on Japanese (bicycle and motorcycle) cross headed screws, this is it (providing Amazon affiliate links for screwdriver pictures and price-comparison):

Do you have to buy this one, or are there any other good ones? Well, I’ve got some good, and some bad news – which one do you want to read first? 🙂

Before theory, here is my practical demonstration of the problem and how the screwdriver shown above solves it:

The rest of this post is a rather detailed explanation of the crossed head screwdriver topic, but with no final answer for now, just a few practical examples.
Took me a lot of time to figure this out and get all the data. Yet, take this article as: “to the best of my knowledge”. Any additions, or corrections are welcome.

“Not all the heroes wear capes” 🙂
– BikeGremlin shower thoughts

Starting with a bit of history. Just as little as necessary to understand the current chaos with cross-head screwdrivers. Don’t be afraid – it won’t hurt. 🙂
Standards, specifications and dimensions are discussed in the 3rd chapter.

You might have heard of these, they are also known as “cross-recess”, “cross-head”, or “cross-point”. How did they come to be, and what is the main problem with them?

A man named John P. Thompson invented (and patented under US Pat. No. #1,908,080) “recessed cruciform screw” in 1932. In 1933 he also patent-protected a matching screwdriver. But he was probably as good a salesmen, and capitalist, as I am. 🙂 Couldn’t get anyone to produce screws and screwdrivers with this patent.

Then came Henry F. Phillips and bought the design/patent in 1935, and refined it (final version patent being US. #2,046,840). Year before that, he had started the “Phillips Screw Company” ( 🙂 ). He understood the advantage of this patent:

Unlike slotted screws of the time, Phillips allowed one to quickly place a screwdriver in the screw – with the screwdriver automatically sliding in place and self-centering. We might take that for granted today, but at the time it was revolutionary. Just try using a battery powered screwdriver on a slotted head screw (with a flat-blade tip) to see what I mean.

What are the problems with Phillips?

Production lines in the 30s (XX century), especially in the growing automobile industry, did have electric screwdrivers, but very few of those had the option of setting up the tightening torque. Phillips design allowed such screwdrivers to cam-out, before exerting too much tightening torque on the screw (and damaging the material, or the screw). Problem with this, that no mass-producing capitalist would care about, is when such assemblies need to be disassembled and serviced – as anyone dealing with stuck, rusted Phillips screws can attest.
Many people claim that the easy cam-out was designed on purpose, to prevent over-tightening. I couldn’t find any evidence to support that – only evidence supporting the self-centering easy slide in function could be found.

Which leads us to another story – Japan: small country, small people, small machines, yet they are the best! 🙂

“Everything done hastily, has to be done again – slowly”
– My late father, Živojin Novović, a quite competent engineer

Samurai have correctly concluded that while screwdriver self-alignment is a great thing, saving split-seconds while inserting it are not worth the headaches with easy cam-out and problems with later disassembling/servicing. So in 1958 they made a very similar design, but with “sharper edges” to put it that way.

Differences between a JIS and Phillips screws and screwdrivers are difficult to tell with a naked eye, but are easily noticed when using a screwdriver!

Read again, and memorize the two sentences above. That is the essence of the problem’s solution. I’ll repeat it with different wording:
JIS screwdrivers work better with both JIS, and Phillips screws!

2.3. The difference between Phillips and JIS screwdrivers

Before a more detailed story about the standards, I’ll briefly explain the main differences. Starting with a picture:

(A) in the picture above shows the difference in the way screws are marked, though not all the JIS screws are marked with such dot (1).
(B) shows how Phillips has a very slight curve (2) – not really visible to the naked eye (exaggerated in the drawing), but it makes the difference when force is applied, “helping” the screwdriver slip out (and in).
(C) and (D) show tip cross-section, when looking straight at the tip. Philips has a slightly larger radius (3), which prevents it from fitting properly into JIS screws.

I’ll repeat: these differences are difficult to spot with a naked eye – all those screwdrivers look pretty much the same.

Now I’ll list the most widely used types, first the obsolete, then the current standard ones, sorted chronologically, so it can be understood more easily.

Already mentioned in chapter 2.1, where all its pros and cons are explained.

Brief reminder: slips relatively easily out of even the matching, Phillips screws, while it’s even worse with the others (JIS, and Pozidriv). Phillips screwdrivers suck – plain and simple.

Its history explained in chapter 2.2.

It used to be defined by the Japanese JIS B 4633, but in 2008 that standard has been declared obsolete and now it is only defined by ISO 8764-1 PH, and ISO 8764-2 PH. Yes, the same ones used for Phillips screwdrivers! See now where all the confusion comes from? They used to be marked like this, differently:

As I explained in previous chapters, JIS screwdrivers are just better in practically every way, compared to Phillips screwdrviers. But how to buy a JIS screwdriver, when they are noted the same as Phillips ones? Are they all the same now?

The answer to the second question is: “no, they are not the same”. What about the first question? That’s a bit more difficult. I’ll try my best to answer it, but first a short note on a standard (two, in fact) that often gets confused with the above noted two:

Often gets confused with Phillips, at least in Serbia, so it’s worth mentioning. Pozidriv is a European attempt to solve the cam-out problem of Phillips screwdrivers (and screws), patented in 1962 by a British company “GKN Screws and Fasteners”. Later perfected to Supadriv standard.

The only difference being that Pozidriv “icon” (to call it that) has two more identification “ticks”:

On the other hand: no other screwdriver will fit Pozidriv/Supadriv screws – it will slip out and damage them. So pay attention when you come across these types of screws, and use appropriate screwdrivers:

A techical drawing of the Pozidriv standard screwdriver tip:

On paper, it differs a lot from Phillips, but in real life, people often confuse the two – which results in damaged screws that can no longer be unscrewed even using a matching screwdriver.

4. How can I find a good Phillips/JIS screwdriver?

After a brief Pozidriv/Supadriv digression, how does one find a good screwdriver for Phillips and/or JIS screws? In chapter 3.2. I explained how JIS was discontinued as a standard in 2008, so now there is only ISO 8764. In other words: almost no manufacturers today make and sell screwdrivers noted as “JIS”, only “Phillips, ISO 8764-1, 2”. Some might (also) mention “DIN 5260-PH”, but no “JIS”.

Then how can you tell if a Phillips is one that works well with JIS screws, and doesn’t easily slip out of Phillips screws?

It still boils down to trial and error. I intend to run this article with local tool companies and suppliers, to see if they have a more universal solution. Until then, I can only recommend what I have personally tested, and a few other ones recommended by many mechanics (but I haven’t tested personally):