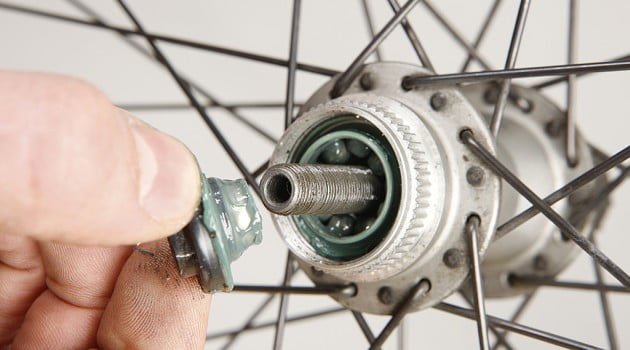 Bicycle bearings commonly use bearing balls, placed in a cone, compressed with a cup (cup and cone bearing). Cup, with curved walls holds the balls, while the cone presses on top, holding them in place.

Durability. A good cup and cone bearing, when lubricated regularly (once a year is often enough) and with regular ball replacement can last practically forever. Instructions for servicing cup and cone bearings are in this post: Bicycle hub overhaul.

Cheap maintenance. All the spare parts needed for servicing these bearings are new balls and a bit of grease. Replacement balls are very cheap and easy to find in all the standard sizes.

Good load distribution. With (angled) cup and cone bearings, load is spread more evenly than with radial bearings. These bearings handle both radial (up-down) and axial (side) loads better.

Low rolling resistance. Balls roll easily, without too much friction.

A bit tricky setup. Setting the optimal cone preload takes a bit of patience and practice. Explained in the Bicycle hub overhaul post.

Modern trends are leaning towards cartridge bearings. It consists of a cartridge, that is inserted in a “sleeve” in the appropriate bicycle part that needs to turn – a wheel hub, headset, BB shell etc.

Balls are packed with two races in a “sealed” cartridge. Sealed as can’t be disassembled, not as (completely) sealed from dirt and water! On top there is usually some sort of plastic, or rubber seal. These seals don’t prevent dirt and water from entering the bearing – just slow the contamination down a bit. That’s why these bearings too need to be cleaned and lubricated to last longer.

These bearings are not better than the old and tested cup and cone system. But they are cheaper to produce in decent quality, than cup and cone bearings.

Simple and straight forward replacement. No need to fine tune preload like with cup and cone bearings.

Low rolling resistance, like cup and cone system. At least while they are new.

Difficult cleaning and re-lubrication. Before they are worn for replacement, but when they get dirty, servicing is harder than with cup and cone system. As it was mentioned before, seals on these bearings only slow down dirt and water contamination, but don’t prevent it. These bearings can’t be opened so that balls can  be taken out (and/or replaced), and all the dirt wiped off. It is only possible to take cartridges out and wash them with some degreaser, then stuff them with fresh grease. Takes longer and it’s still not as thorough as with cup and cone system.

Worse handling of axial loads. Cartridge bearings are usually radially designed, i.e. ball races are symmetrical and deal well only with radial loads (up and down), not with axial (side) loads – like present when pedalling hard out of the saddle. There are “angular” versions of cartridges that take axial loads better, but they are not that widely available.

There are special versions of cartridge bearings designed to be “faster”, i.e. to have as low rolling resistance as possible. How is this achieved?

Zero contact seals. Seals don’t overlap bearing races. This means a little less drag, but also easier way for dirt to enter the bearings. This means the bearing will be “faster” when brand new, but stop being faster and even become slower very quickly with use, than a comparable bearing with an overlapping seal.

Ceramic balls. With standard bearings, both balls and races are made of steel. Bearings with ceramic balls are often marketed as “ceramic bearings”, even though only balls are ceramic, while races are still made of steel. Ceramic balls can be machined to be smoother surfaced than steel ones. They are also harder, more wear resistant. So, these bearings are advertised as faster and longer lasting. However, since steel is softer than ceramics, ceramic balls will quickly pit and damage the softer steel races. Resulting in a bearing that lasts shorter than a comparable “full-steel” ordinary bearing. It will also quickly produce more drag and develop play.

Completely ceramic bearings. These bearings have both balls and races made of ceramics. Because of great hardness of ceramics, they need to be machined to very tight tolerances. If they are of high quality (expensive) they will be faster and last longer than ordinary steel bearings. However, hard and brittle ceramics is more likely to be damaged from a hard impact.

Bottom line: these bearings provide some advantage to racers, for a race or two, then being replaced. My personal opinion is that for other uses, good quality ordinary steel bearings are a better choice.

Rolling resistance is higher than with ball bearings, but they can handle a lot higher loads, because of a greater contact area with races that rollers provide, compared to balls.

They are used as headset (steering) bearings on some (older) bicycles. The fact these bearings make more rolling resistance is irrelevant for this use, since handlebars are not turned around all the time – only moved from time to time to steer. Using slightly (unnoticeably) more force to turn the bars does not affect speed, nor steering precision.

On the other hand, greater drag can be even beneficial for steerer bearings. How so? Some bicycles, when riding fast down a hill, produce what is called a “high speed shimmy”. I.e. handlebars start shaking. Higher drag of steerer bearings reduces the chances of a shimmy occurring, and if it does occur, slightly reduces the severity of it.

They are seldom used in modern bicycles. One of the reasons was lower durability. Such bearings are poor at handling forward-back movement of steerer tube when riding over road bumps.

For wheel (hub) bearings, the best system is old cup and cone. Shimano, with their middle class hubs (Deore for MTB and Tiagra for road) offers the best “bang for the buck”. For non-race use, it makes little sense using anything more expensive.

For steerer bearings, any decent quality ones will do.

Special bearings, especially if paired with softer greases, are a waste of money, except maybe for top class racers.

4 thoughts on “Types and designs of bicycle bearings”