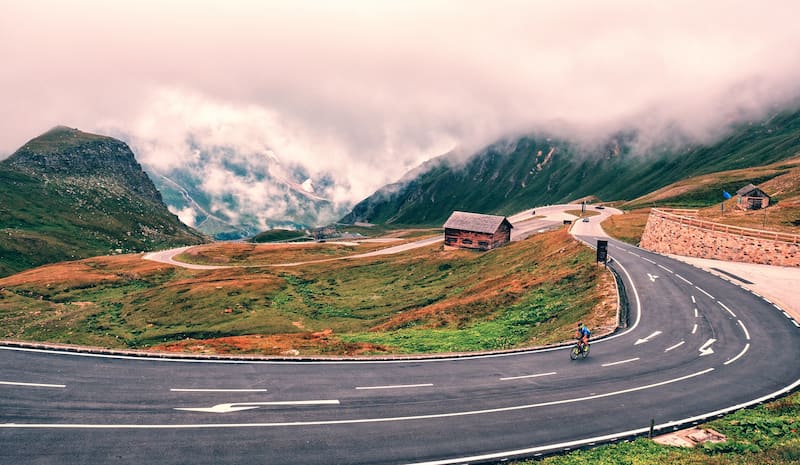 One of the nicer parts of cycling, at least for the author of this text, is riding down hills – the longer and faster, the better, whether on paved roads, or through forests. 🙂  This post will explain good bicycle braking on long descends techniques, that allow for safe and fun cycling down long, steep descends. Fist the technique will be explained. Then, an explanation why it is the best and safest way, in author’s opinion and experience.

When talking about descending, many readers might find the following two posts useful: Bicycle braking technique and Fast bicycle cornering.

Technique is very simple to explain and apply, there are only three rules:

It must be stressed again – it is not recommended to cross the line where one feels safe and in control. Faster speeds and harder braking will come slowly, gradually, with practice. Going over the “comfort limit” results in fear, adrenaline (survival reactions), and is not likely to make one faster, or better at braking, quite the contrary. Riding near that limit, with practice and concentration allows for that limit to be pushed further and further. Also, it is very important to pay attention to road conditions, visibility and traffic.

Many people wrongly believe (and advise others) that it is better to keep “dragging” the brakes throughout the descend, so that the bike keeps going at a lower speed all the way down. Why this is not good and can even be dangerous will be explained in the following chapters. For now it should just be mentioned that the main problem is overheating (of brakes and tyres).

2. A bit of elementary physics

To understand why it is counterproductive to keep dragging the brakes when riding down a hill, a few elementary things from physics need to be kept in mind. Let’s start:

3. What does this mean in practice?

Let the bicycle go as fast as comfortable, especially on straight parts of the downhill. That way brakes will cool down better, while the air will do the most of the braking – instead of the brakes. Just make sure not to underestimate an oncoming turn, so that all the needed braking and slowing down can be done in time, without stress.

Disc brakes can “get hurt” from overheating in two ways:

All these are the reasons why it should be allowed for the air to do as much braking as possible and be careful not to overheat the brakes or the tyres.

When talking about braking (controlling bicycle speed) on long, fast descents, there is a lot of bad information and misconceptions. Some of the most common will be “debunked” in the remainder of this text.

The author of this text hopes it will help cyclists to enjoy the ride even more, especially when it all goes downhill. 🙂  Keep practising, make sure not to overstep your safety limit, and enjoy cycling.