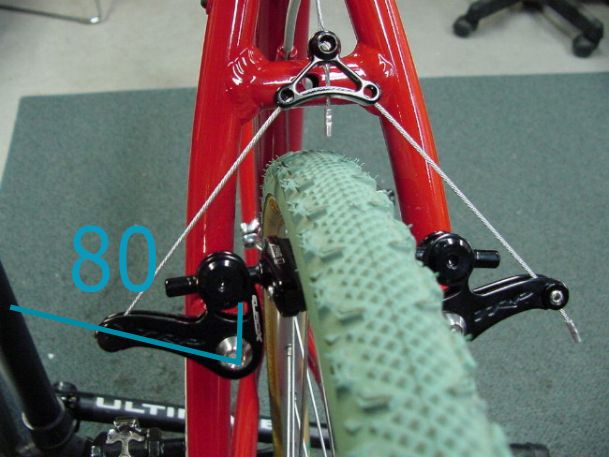 Cantilever brakes are unjustly considered to be poor brakes by many cyclists, compared to V-brakes for example. They do have their flaws, but low braking power is not one of those, it is mostly due to poor pad/rim material, and (more often) due to poor adjustment. Cantilever brakes allow the user to choose between stronger braking force, or shorter brake lever travel with weaker braking force. In short, these brakes have adjustable mechanical advantage, which is explained in this post:
Bicycle mechanical brakes – working principle.

The aggregate effect of all the noted factors determines the total mechanical advantage. First factor is determined by lever choice. Second is (mostly) determined by brake caliper choice. The rest can be altered by brake adjustment and this will be explained in the next chapter.

Caliper angle of 90 degrees gives the least mechanical advantage. As the angle narrows, mechanical advantage rises, but pads move less for the same brake lever travel. Up to a point when the advantage starts diminishing, along with decreased pad movement! To make this as close to 90 as possible, with narrow profile brakes the pads should stick towards the rim as much as possible, to make the cable anchors stick out as much as possible. Of course, pads mustn’t be too far from the rim, since the effective angle is the one at which pads touch the rim. It is the opposite for decreasing the angle – pads should stick out towards the rim as little as possible.

Available range of angles depends on caliper type, as shown in the pictures below.

The smaler the yoke angle, the greater mechanical advantage. However, yoke angle of zero would mean the cable passing through the wheel. So the minimal possible yoke angle is one that allows the straddling cable to clear the rim, tyre, mudguards etc.

For wide profile brakes, it is the other way round. Because of the caliper angle, low yoke angle can give too much mechanical advantage. That means too much brake lever travel before the pads even reach the rims. This should be considered when setting up these brakes.

Medium profile brakes are somewhere in between the two extremes.

Changing pad distance from the pivots (moving them closer, or further from the brake caliper arms) effectively changes both cantilever and caliper angle. This is the first thing that should be set up, according to the type (profile) of cantilever brakes used.

As a brake lever is pulled, harder for hard braking, several things happen:

While the effect of greater yoke angle always decreases mechanical advantage, the effect of caliper angle change depends on particular achieved angle and angle change. This can be determined only when tested, feel on the stand can be deceiving. That is why cantilever setup takes some trial and error, and experience can help get it right in less time.

Shimano cantilever brakes of decent quality (clicking on the image below leads to the Amazon on-line shopping – as an Amazon Associate I earn from qualifying purchases):