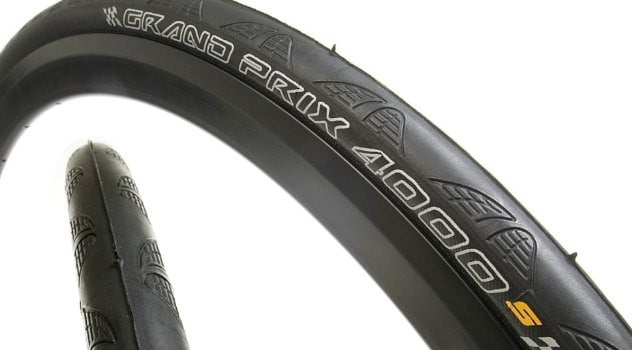 Many cyclists have doubts when it comes to slick tyres and their grip, especially on wet pavement.  This post will address slick bicycle tyres, their strengths and weaknesses.

Contents:
1. Role of tread pattern on bicycle tyres
…1.1. Off-road conditions
…1.2. Paved roads
2. Wet pavement with puddles
…2.1. A few words about car tyres
…2.2. Difference between car and bicycle tyres
3. Slick tyres even in the rain?!
4. Why do tyre manufacturers put grooves even on tyres designed for pavement?
5. Recapitulation

Tread pattern on car tyres has two roles. First it aids traction on soft surfaces, where a tyre can dig in more easily. The other role is on hard pavement when there is rain and water on it. However, for bicycle tyres, tread pattern has use only on off road conditions (or in the snow), none on paved roads. It will be explained why.

If the surface is soft enough for tyre to leave an impression in it, then tread pattern helps tyre dig in and improves traction. Deep, aggressive tread pattern is good for mud/snow, with grooves wide enough for dirt to fall out of them, not to get stuck and fill the grooves, so that tread pattern gets nullified.

This is why for riding on packed dirt roads, small tread pattern tyres can be useful. For riding in softer mud, snow, grass – wide knobby tyres grip best.

On the other hand, if the tyres don’t leave impression in the surface, for example on concrete, or pavement, the tread pattern gives no benefit to traction – quite the contrary. However uneven the pavement, tread pattern does not dig into it (rubber is softer than concrete), so it can not aid in traction. Tread pattern will seldom align with road irregularities. That is why on pavement slick tyre is the best – to make the contact patch as wide as possible, making it even, following road irregularities as good as possible.

Tread on a car tyre has an important role when riding on wet pavement – it enables water to be pushed out, so that rubber can reach the pavement, this helps avoid so called aquaplaining, or hydroplaning. Car tyres have a wide flat profile, so without tread pattern grooves, water would not be dispersed easily.

2.2. Difference between car and bicycle tyres

How much does bicycle tyre differ from a car tyre? Drastically. In terms of width, as well as in terms of profile shape. Car tyre is wide and flat, while bicycle tyre is narrow and rounded:

Bicycle tyre, because of relatively small width and because of rounded profile that is perfect for pushing water aside, “slicing” through puddles, can hardly come into a situation to aquaplane. In order to do so, a cyclist must go faster than around 150 km/h.

Since a bicycle can not aquaplane (not at speeds below 100 km/h), and since the pavement doesn’t become softer when wet, tread pattern on road/city bicycles do more harm than good. Slick tyres are by far the best choice for cycling on paved roads – whether it’s sunny or rainy.

People are used to car tyres with tread, so it is hard for them to accept the fact that bicycle is not the same and the best tyres for cycling on pavement are slick. For off road riding, tread pattern is good, there is no doubt about that. However, on pavement, tread pattern does in fact lessen the traction!

To prove this it is enough to make an experiment: take a bike with fat knobby tyres and try hard braking or sharp cornering on pavement (at one’s own risk – a fall is very likely to happen). The same with slick tyres is a lot easier – grip is a lot better – this can also be easily tested. On wet pavement, the difference is even greater – the slick tyres outperform knobby ones by a higher margin, which can also be tested using the same experiment. Bending of knobs/tread, squirming, can often cause unpredictable loss of traction.

Tyres with less aggressive tread pattern are not as bad as knobbies, but slick tyres grip better than those also – just the difference is not that obviously big.

Slick tyre with soft rubber compound that grips well is the best choice for riding on pavement.

4. Why do tyre manufacturers put grooves even on tyres designed for pavement?

Because it’s easier to just sell a tyre to people, than to try explaining that all they thought about tyres is wrong when it comes to pavement and bicycles.

Road tyres are often made with just a slight “hint” of a tread pattern, just so that customers can sleep better.  🙂

Slick tyres with soft, “sticky” compound are the best choice for cycling on paved roads. Especially when it is cold and rainy.

All other things being equal, tyres with tread roll slower and grip worse than their slick counterparts. More details about rolling resistance is given in this post: Are narrower tyres “faster” – rolling resistance.

Author’s recommendation for good quality, all weather slick tyres. Clicking on the image below leads to the Amazon on-line shopping. As an Amazon Associate I earn from qualifying purchases.