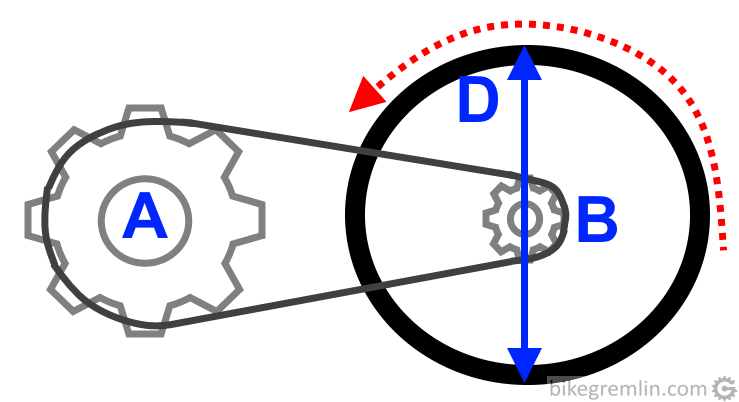 First bicycles, called “penny-farthing”, had a direct connection of the pedals with the drive wheel.

With these bicycles, the gear ratio was only affected by the (huge) drive wheel diameter. So a wheel of a 60-inch diameter was faster than a 50-inch wheel but was also harder for uphill riding (and starting). Modern style bicycle (called “safety bicycle” at the time) introduced easier and safer handling, braking, with the additional “complication” of a chain drive, using (at least) two chainrings.

Then it was needed to somehow get the idea of how fast (or hard) does a new bicycle go, compared to the old one. Introducing two chainrings and a chain meant that the drive wheel diameter was no longer crucial in determining (and comparing different) gear ratios. That is where gear inch steps in.

Gear inch gives a rough estimate of how far a bicycle goes for one turn of the pedals (though not exactly, as will be explained near the end of this chapter). Gear inch units are rounded to whole numbers and have relatively low values – easy to calculate, memorize and compare. Picture 2 gives basic values that are taken into calculation.

When measuring diameter, a total diameter including the mounted tyre is taken. A wider tyre will also be “taller” and give a larger wheel diameter. The formula clearly shows that:

For example, if the front chainring has 50 teeth (A), the rear one has 14 teeth (B) and the rear wheel has a 28-inch diameter (D), drivetrain gear inches will be:

See how easy these figures are to memorize and compare? 100, 93, 126… Gear inch drive ratios rough guide is really simple:

What gear inches don’t show? The measure of how far a wheel travels for one front chainring (pedals) revolution. For that, you’d need to multiply it with the number Pi ( π ~ 3.14). Gear ratios used in examples would then be shown as:

These numbers are harder to memorize, compare and are not used in practice… not when gear inches are used. Of course, as I said in the introduction, gear inches also show what gear ratio would be achieved with a drive wheel of the given diameter in inches (as the gear inch value shows) with the cranks directly attached, using a penny-farthing design.

3. What these units don’t show?

Correct time. Joking. 🙂  In terms of gear ratios, these units don’t show the total mechanical advantage. That is: when a pedal is pushed by a certain force, how much force is transferred to the drive wheel. The reason is neither of the units takes (pedal) crank length into account.

Yes, the fewer gear inches/metres of development, the more mechanical advantage, no questioning that. Still, it’s not the same whether the cranks are 165, or 175 millimetres long. It’s easier with a longer lever. This might not seem much, but it’s over 6% difference (and one of the reasons why MTB cranks are usually about 5 mm longer).

Adding the length of the cranks into the formula is not practical when comparing gear ratios (“which cassette should I get, which chainrings…”). Especially since crank length choice also depends on many other factors (desired ground clearance, rider’s leg length, pedalling style etc). So gear inches or metres of development (whichever one prefers) are good enough for comparing gear ratios and using gearing calculators to plan optimal drivetrain setup.