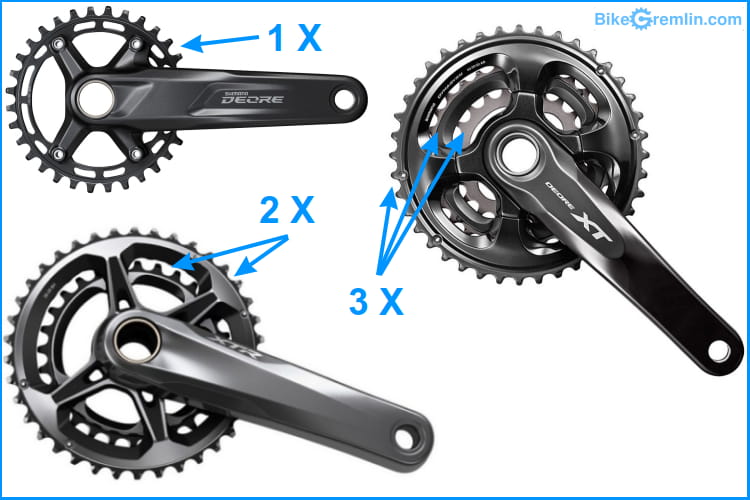 The cycling industry, mostly for marketing reasons, moves towards an ever-increasing “number of speeds” at the back. However, there is also a trend of having fewer front chainrings. First, the triples were extinct from high-end groupsets of big manufacturers, then they came for the doubles… 🙂

Today’s modern thing is the 1x – bicycle groupsets with only one front chainring. SRAM was the first to announce “the death of the front derailleur” when they made the first 1x groupset, while other manufacturers joined the race. This post will give an objective overview of 1x system pros and cons, compared to 2x (double), and 3x (triple) systems, so you could easily decide whether 1x is an optimal choice for You.

When “weighing” pros and cons, it is important to note that, while they are objective, their significance depends on particular cyclist’s priorities and riding conditions, even preferences, budget etc. Likewise, the number of pros and cons is irrelevant – it matters how much they affect performance, which entirely depends on riding conditions, as will be explained. In those terms, at the end of this post I’ll give an overview of some typical cases and what I think is the optimal choice for each, based on my knowledge and experience. Still, it’s best to weigh the pros and cons personally and decide for and by yourself what works for you.

Systems with multiple front chainrings allow for large changes in gear ratio by doing only one front shift. With 1x systems, this is not present.

With modern “compact” (50-34 toothed) double cranks this can be a problem. Especially if using common 11-28 cassettes (and the like). For riding on flats, 50 is often too large, while 34 is too small. Rider ends up riding severely cross chained most of the time.

With standard doubles (53-39 for road, or 26-36 for MTB), this is not a problem. With triples even less so. There you can usually find an optimal chainring for climbs, flats and downhills, without much cross chaining. In this situation, greater gear ratio change when shifting up front is often beneficial. When starting going up a hill, one front shift gives a significantly “easier” gearing, while fine tuning can be achieved during the climb with rear shifts. Same goes for reaching a hill top – one front shift puts you in a flat/downhill gearing range rather quickly.

So, large “jumps” are not always a bad thing, as some advocates of 1x systems claim.

Often used argument in favour of 1x systems is that “double and triple systems have a lot of double (overlapped) gears, with only about 10-15 really different gear ratios).” This is used in a context that, for example, 2×10 doesn’t offer 20 different gear ratios as if it’s some kind of fraud.

Modern “compact” double cranks, with their large difference in chainring tooth count have very few overlapped gears, but that precisely is their main flaw, as explained in chapter 3.1. They do give a wider gear ratio range, but at the cost of more cross chaining and less practical shifting. Trying to emulate a triple with only two chainrings.

Standard doubles and triples have more overlapped gear ratios. For example a combination of 53 teeth up front and 19 teeth at the rear, gives approximately the same gear ratio as 39-14 combination. If a hill climb is approached, one can ride 39 up front, then make smaller adjustments by shifting at the rear as the climb starts. If riding on a flat, or expecting a downhill, one can use the big ring up front (53), making smaller adjustments with rear shifts. The lack of these overlapped gears is the main nuisance people have with compact doubles.

1x systems have a slight advantage here – no need for planning, or thinking ahead, just shifting up and down. Price paid for that are the 1x systems cons noted in this post.

Sketch 1 is used to demonstrate what I mean:

The sketch is exaggerated to show what the problem is. Angle that right hand spokes make (A and B). Cassette with more sprockets ends up taking more space, being wider and requires either a wider overall hub (which is limited for most bikes), or weaker wheel due to very sharp angle of right hand spokes. Such wheels can’t take nearly as much lateral load coming from the right hand side. Also, spoke tension differences between left and right hand side spokes are huge, which makes other problems, mostly resulting in a wheel that is less strong and less durable.

7 speeds at the rear has been phased out by manufacturers – who would want a strong, long lasting wheel with cheap components? Not the manufacturers.

Hubs for 8 to 10 speeds (and 11 speed MTB, but not road) have slightly worse right hand spoke angle.

All this while modern hubs for hard off road riding conditions are made up to 157 mm width! Which makes frame design very difficult, since rear chainstays have to be wide, without pedals (rider’s legs) being too widely placed and without hitting the chainstays at the same time.

Same maximum gear ratio can be achieved using a 36 tooth chainring and 12 tooth sprocket, as with a 30-10 combination. Since 30 T chainring has a smaller diameter, ground clearance of such bicycle will be greater than of the one using a 36 T chainring. Where that is important, this is a logical choice (off road). It needs to be said that old MTBs had smaller 26″ wheels and triple chainrings and still got everywhere – now they use standard 28″ wheels (labelled 29″ when placed on a MTB) and clearance has become a problem somehow?

3.5. Total number of teeth for a given gear ratio

In addition to the example from the previous chapter, another one would be that achieving lowest gear ratio of a 30-45 combination would require a 54 toothed largest rear sprocket if used with a 36 toothed cranks. This explains why 1x drivetrains have required having a smallest sprocket of only 10 (or even fewer) teeth. so that a decent top and lowest gear ratio can be achieved without outrageously large sprockets (well, 40+ teeth is outrageously large if you will, but it’s still below 50 teeth).

In the previous chapter, (questionable?) advantage of using 30-10 combination over 36-12 combination way of achieving the same gear ratio was explained (more clearance). What is the (unquestionable) downside? More mechanical losses and faster chain and chainring wear. When a chain is bent over a chainring that is too small (in these terms anything below 13 teeth is very small), there are more mechanical losses due to increased friction and chainring and chain wear is increased, because 1, or 2 teeth carry all the load.

This can be considered to be a flaw of 1x systems.

When advertising 1x systems, one of arguments is also there is “no worrying about cross chaining”. With double and triple setups it is possible to severely cross chain – if using an outer most front chainring with two most inner rear sprockets (big-big combination). The same goes for small-small combination. So yes, this should be avoided and thought of when using these systems. However, it can be avoided. With 1x systems, severe chain angle in highest and lowest gear ratio is unavoidable, as shown in sketch 2.

So it can be said that with 1x systems there’s no “worrying” about cross chaining – you get what you get, whether you like it, or not.

Greater chain angle leads to higher mechanical losses, chain is more likely to start making noise when working and both chain and chainrings will wear faster. If it’s any consolation, 1x cassettes, with the largest sprocket having 40+ teeth are more expensive, at least.  🙂

Apparently, they are trying to fix the problem by designing a chainring that rotates left-right, so it can follow the line of a badly angled (crossed) chain.

I expect that in 5 to 10 years’ time, manufacturers will “discover” something like a “front derailleur” and “more than one front chainring” (ofcourse, marketing departments will surely come up with some very cool-sounding names for these!). 🙂

4. Typical cases – when is which system an optimal choice

Here I will list some typical cycling use cases/scenarios, with system that I think is an optimal choice. With a brief explanation why. Of course, it is best to choose for yourself.

Useful tool for choosing a cassette and/or gearing setup is “on line gear calculator“.

This concludes the list and explanation of pros and cons of 1x systems compared to 2x and 3x ones. I tried to provide all the info objectively as it is. If you have any questions, corrections, or comments, use the section below.

32 thoughts on “Pros and cons of 1x groupsets/systems”