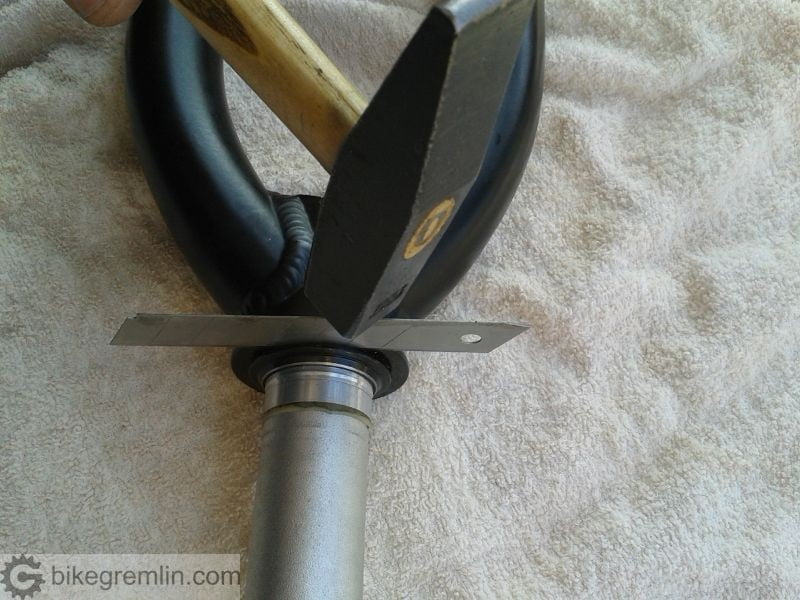 When replacing the headset (i.e. fork, or steerer bearings), removing the fork crown race (fork cone) can be problematic. Especially if the fork crown is wider than the race, so it can’t be punched off from the bottom. This post will explain the short and simple procedure and note the needed tools.

1. Tools for the job

Put the fork on a wooden plank/surface, so it doesn’t get scratched or damaged. An old towel can be added beneath – just in case.

Place a scalpel blade between the fork crown and the race, with the sharp, cutting part towards the fork. It can usually be placed to get stuck with just hand force.

Carefully hold the blade in place with one hand, then gently knock it in with a hammer. Make it go in just for about 1 mm, so it can easily be removed with hands.

Rotate the fork by 1/8 of a circle (some 45 degrees), then repeat the process. In this first go around, don’t try to force the blade all the way in – just by about 1 mm.

Once the full circle is finished, make another round, knocking the blade a bit further in. About 2 – 3 mm is enough.

Also, do the whole round. Rotating the fork by 1/8 of the circle. Work slowly and gently, without much force so the steerer tube doesn’t get cut, or damaged.

After finishing the round, check whether a small thin flat-bladed screwdriver can fit between the crown and the race. If it can’t, then use a flat file to blunt the scalpel blade, in order to minimize the chance of damaging the steerer tube. Be careful not to cut yourself. Use protective gloves and pliers, or a vice (eye protection is also a good idea). The blade is brittle, so work gently. Either place the blade with the “back” (dull side) resting on the wooden plank, holding it with pliers, or place it in a vice. Then gently blunt the blade with the flat file.

Now make a third round, knocking the blade for another 1 mm. Don’t use force if it won’t go, so you don’t damage the steerer tube. After this “round,” there should be enough room to place a small flat-bladed screwdriver.

Place a small flat-bladed screwdriver between the crown and the race and turn it gently by about 1/16 of a circle (about 20 degrees). Repeat this all the way around, making the full circle in 8 to 10 “pokes”.

When rotating the screwdriver, the race should be lifted by far less than 1 mm. Go gently, patiently. The goal is to lift the race as parallelly to the crown as possible, in small increments. After there is enough room to use a larger screwdriver, repeat the process, going around with a larger flat-bladed screwdriver. Again, lift by just a little, at 8 to 10 different places all around the fork.

Finally, the race should get unstuck – enabling removal with bare hands. Before placing a new race, smear some copper, or aluminium mounting (anti-seize) paste (i.e. “copper grease”) on the crown, so the new race doesn’t get galvanically welded to the fork crown in time.

Mounting a new headset will be explained in a separate article. Now, just a note: after placing a new fork crown race, clean all the excess mounting paste so it doesn’t get mixed with bearing grease.

Of course, it is faster and easier to do this with a proper tool. A click on the picture below opens an Amazon search for a fork crown removal tool made by IceToolz (as an Amazon Associate I earn from qualifying purchases):