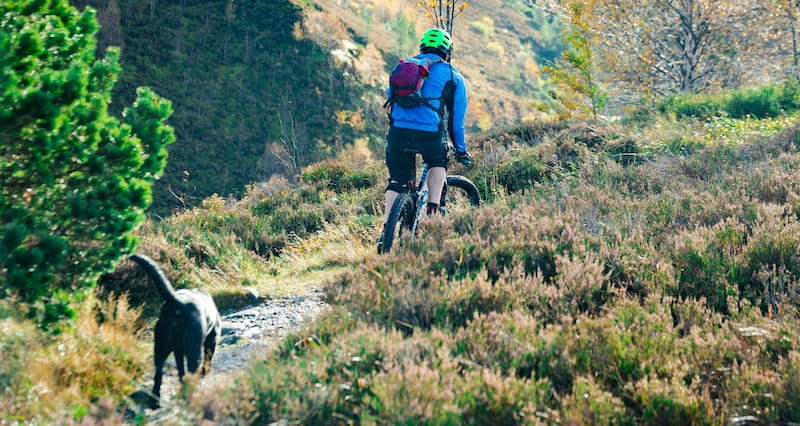 How to stay safe if you are cycling through areas with dogs running freely. 🙂

Take everything I write here as “in my opinion and experience” or “as far as I know.” I have a certain amount of experience with cycling, dogs, and with cycling in areas full of stray or loose dogs – but I don’t claim to be a dog expert.

Dogs generally love people. They can sense if people love them. But they can also be “territorial.” If a stranger gets into what dogs consider to be their territory, they will attempt to scare them off, and sometimes even attack (primarily in order to chase the “intruder(s)” away).

Unless they are trained, dogs can’t understand our words as commands, but they can sense the basic idea we are trying to convey by hearing the tone of our voice. For example, instead of saying “good boy,” we could also use the same warm tone and say “doobar pas” and they will get it just the same.

If we are scared of a dog, they will sense it – even if we use the words “good boy”.

Dogs also pay a lot of attention to our posture and body language. Body language can show when a person is relaxed, scared, or upset/angry.

Even if we manage to fake the tone of our voice, our body language could give away our true feelings – and vice-versa. Dogs (and children) are very good at picking up on this – when the body language and the words/tone are “misaligned.” That can seem unnatural and scary to them! A scared animal may attack – acting in what it perceives as necessary survival self-defence.

Having said that, bear in mind: some dogs are crazy. Just like some people. Most stray/street/wilderness dogs in my area get quickly killed (by humans, or other dogs) if they are crazily aggressive. But domestic dogs that are left to run loose often lack that “Darwinian” discipline (and the owners are to blame, but that doesn’t help us when we come across such a dog).

Let me now tackle a common misconception: dogs wag their tails when they are happy. That is true, but that doesn’t mean you are safe – they could be happy about chasing you and having a bite. Read the following chapter:

People often fear what they don’t know. Yes, in a perfect world there would be no stray dogs chasing us. But that’s not the case. We can whine how we “have the right to freely cycle wherever we want,” but that won’t help us.

Make the effort. If you aren’t familiar with how dogs behave – and especially if you are afraid of dogs: find a friend who has dogs and spend some time with the good dogs. Dogs are our friends (unlike some service providers that advertise as such).

Learn what dogs look like (body language) when they are happy, scared, angry etc. Learn how to communicate with them. Spending more time with good dogs will help you overcome any fears – and it will make you a better person.

The hardest path, of learning and knowledge – is the best and the easiest one in the long run.

4. How to protect yourself from dogs when cycling?

The first thing – don’t be afraid (see the previous chapter). Generally, a dog won’t attack you unless it really has to – because the dog is also afraid of what it can expect from you.

If it is barking, it’s probably trying to scare you off their territory. A deep growl is usually the last warning before an attack. Even at that, there is an “I’m scared, go away” growl, distinct from “I’m about to attack” growl (again, see the previous chapter). And even a bite can also be a means of scaring you off, not every dog will continue to try and devour you.

What should you do?

Stop pedalling – let the bike coast (if you are on a climb, get off the bike and start pushing it). For some reason, the pedal spinning motion gets many dogs to start barking, chasing and even try to bite your foot.

Talk to the dogs using a calm, patient voice (I usually say “don’t, we’re colleagues” 🙂 ). No screaming, shouting, or getting upset. Stay calm and confident.

Tuck your head in a bit (as if you’re trying to shorten your neck), keeping your chin just slightly downwards. Keep your back as upright as possible (if you are riding drop bars, get your hands on the tops). Keep any dogs within your field of vision, but don’t stare into their eyes.

This body language, combined with a calm tone of your voice, tells the dogs: “I don’t want any trouble, but I’ll defend myself if I must.” Staring into their eyes says: “come on, bastard, show me what you’re made of!”

In case the dogs are approaching you and seem aggressive, bend down and pretend you are picking up a rock from the ground.

If dogs are in a pack, one is usually the bravest. If things get heated, that one will challenge you first. Dismount the bike to the side opposite from the one the dog is approaching from. Manoeuvre before dismounting if necessary. Get the bike between you and the dog(s). Keep an eye on all of the dogs in a pack. This can be tricky when they surround you, but you can sense which parts of the pack are the most “forward going.”

Remain calm, confident and keep talking to the dogs using a calm voice.

Keep moving away from the area that the dogs consider their territory. Which territory is that? You can usually figure it out – dogs are usually “guarding” a meadow, or a part of the road etc. Sometimes, the situation is such that it’s best to turn around and go back to where you came from (use your own judgement and common sense, just don’t let the fear take over).

Don’t turn your back on them. Even if you have to (in order to move out), turn your head so you can see them, and so they clearly see that you can still see them. Don’t look them in the eyes, you can look at the ground in front of them.

The bottom line is: if you show dogs you aren’t afraid, and don’t turn your back so they could attack you without you noticing it (keep your eyes where they can see that you can see them), the dogs aren’t very comfortable with attacking you. As far as they are concerned, you too are a big, strong dog.

On a recent Sunday ride, my 7-year old and I passed a pack of dogs. They didn’t pay any attention to us. A few seconds later, I heard barking and a person screaming. The cyclist was obviously very afraid of dogs and they were happy to keep surrounding the cyclist, barking and causing more scared screams. 🙁 The owner of the dogs came out as I was turning around and calmed them down quickly. On our way back, we had passed those dogs again and they paid no attention to us once more. Those dogs could either sense fear, or they really hate SRAM groupsets. 🙂

Prevention is important. Don’t ride with headphones in your ears. Your eyes and ears are important for gathering info from your surroundings, spotting any danger in time and accessing the situation correctly.

It is OK to turn around and go back, before getting into any trouble. Call for help (using a phone if needed). Courage is doing what’s right in spite of being afraid. Foolishness is getting in trouble just to prove a point.

Bicycles let us move very fast, so use that to get out of danger.

Now, I’ve never had to use force to defend myself from a dog attack. I’ve intervened when two dogs were fighting, and chased dogs away when they were attacking someone else, but I’ve never had a dog try to (seriously) harm me personally. So all the advice given here is based on what I’ve heard from the wiser people.

Having some dog treats or bacon at hand can help. You can face the dogs approaching, crouch down and toss it in front of you, towards the dogs – a few metres in front of you. Even if it’s a very aggressive pack, they are likely to start fighting among themselves for food, giving you enough time to run away. If you do this a few times, over a few days, you could make some new friends. 🙂

A squirt of water from a water bottle on a dog’s nose can also make them back off.

Retractable telescopic batons (Amazon affiliate link) are easy to carry and can be very effective – letting you hit a dog with your hand still out of its reach.

Check your local jurisdiction when it comes to these things.
If you plan to carry some of the above-noted gadgets, practice a lot with them at home, so it becomes “reflex.” When you are in danger, it is not the time for reading the user manual.

Use the bicycle as a portable fence, placing it between you and the dog(s). It takes some time for the dogs to figure out how to go around it. They usually go straight for the shortest path.

If the dogs are about to attack you, the time for the calm voice is over, and it is time for loud, angry “NO, GO HOME!” and similar.

A loud bang can make most dogs stop, even get back. Depending on your local jurisdiction, there are different ways of having that option at hand.

Use your height and the relatively long reach of your legs – a kick in the nose can be very painful. Timing and balance are important at this.

In case of the smallest scratch, visit a doctor immediately and be prepared to take an injection for rabies if the doctor recommends that. Rabies is deadly, incurable if not treated promptly.

As I explained in the second and third chapter, fear can be a great problem and overcoming that helps a lot. However, there are crazy and aggressive dogs that will attack you nonetheless. Use caution, common sense and be safe.

If it comes to the worst – you can’t avoid the attack, and are getting overwhelmed, what’s worked for me in similar situations with humans:

That at least is my philosophy, what’s worked for me so far. Everyone should choose by and for themselves what they think is best.